US TRUMPET player Dan Brantigan will tour Slovakia with his American-Slovak quintet from March 20 - 29. The group plays rock laced with a style of improvisation Brantigan calls a "mess." "A good mess," he says, is as if "Pat Metheny met Led Zeppelin and U2 for a drink at a rave, and they all decided to play together." 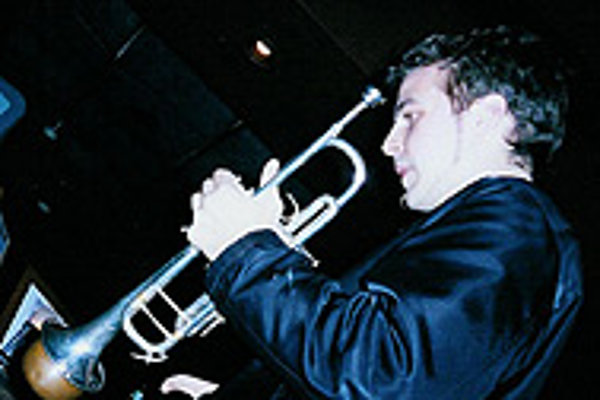 Font size:A-|A+  Comments disabled
US TRUMPET player Dan Brantigan will tour Slovakia with his American-Slovak quintet from March 20 - 29. The group plays rock laced with a style of improvisation Brantigan calls a "mess." "A good mess," he says, is as if "Pat Metheny met Led Zeppelin and U2 for a drink at a rave, and they all decided to play together."

"Dan's last gig at our club was sold out and the audience cheered for a dance finale and several encores," said Maroš Pavúk from Brezno's Bombura club, where the quintet will stop on March 25.

Pavúk expects this year's concert to be especially good, considering the incredible new talent recently added to the band.

"Scott brings a new element of soul to the mix, coming from a rock/soul background. Kilmer [of Simon Shahin and Lauren Hill] is a one of the most talented and versatile percussionists in the States and is really stretching the confines of what a drummer can do," Brantigan says as he introduces his new band members.

"And as for Valihora and Rózsa, they need no introduction, I'm sure."

Rózsa is a prolific instru-mentalist, film composer and producer. Valihora, who has played with such musicians as Ron Affif, Gabriel Jonas Quartet and Sam Parks, is part of the whirlwind trio for the Japanese pianist Hiromi.

Both are graduates of the Berklee College of Music in Boston, where they met Dan, and began playing mostly in a trio setting. In 2001, Rózsa and Valihora took Brantigan to Slovakia for the first time on a week-long tour.

"I was introduced to Slovak folk music and instruments, as well as the strength and integrity of everybody whom I came in contact with. We ended every performance with Oskar's arrangments of old Slovak folk songs," Brantigan recalled.

Slovakia's landscape, speci-fically the High Tatras, became a serious source of inspiration for Brantigan's music. "It was so beautiful and fresh, unlike any place I had ever been. John Shannon [of Waking Vision] and I had similar experiences with this and both talked very extensively about coming back to Slovakia and writing a 'soundtrack' specifically for this landscape."

In 2003, Brantigan invited Shannon from the Waking Vision (the two bands, coexisting together, share their musicians) to tour Slovakia as well. The result was Becoming, an album recorded at Studio J in Trnava. This time, Brantigan also plans to record an album, he told the Spectator.

"[The 2003] trip was a life journey and many things became clear. I realized the majestic and spiritual nature of the land and people, which changed the way I play for some reason. It brought out more honesty and integrity, as well as an intense dialogue between myself, Oskar, and Martin about new concepts in art and music."

The band has changed since its 2003 tour, but its principles and influences remain the same, the trumpeter added.

The Dan Brantigan Quintet tour stops in 10 towns along its way from Liptovský Mikuláš on March 20 to Bratislava on March 29. For more information on the band and the tour, visit www.danbrantigan.com.