THE WOES of Slovakia's cash-poor and recently revamped health care system continue to occupy the spotlight ahead of the upcoming general elections, and politicians have eagerly embraced the issue as a plank in their election platforms. 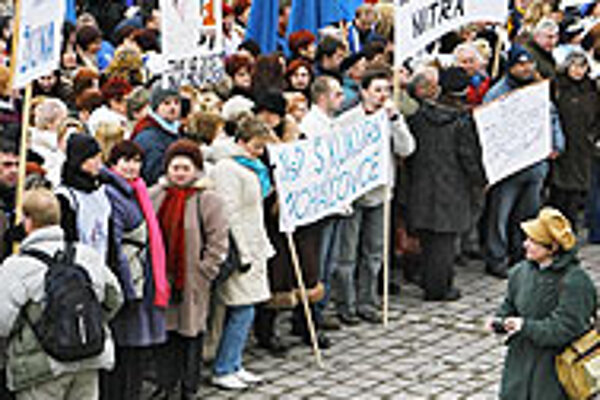 Font size:A-|A+  Comments disabled
THE WOES of Slovakia's cash-poor and recently revamped health care system continue to occupy the spotlight ahead of the upcoming general elections, and politicians have eagerly embraced the issue as a plank in their election platforms.

Following a series of protests by medical staff in the eastern Slovak city of Prešov earlier in March, doctors in Bratislava and later also medical staff in other parts of the country voiced discontent with their wages.

Health care workers have threatened to strike unless their wages are increased by 21 to 25 percent.

The troubled sector, which Health Minister Rudolf Zajac began to reform after the 2002 national elections, is still short of cash and makes inefficient use of what funds it has.

"We're not interested in endless talks about something that the other side does not want to accept, and we don't want to engage in endless negotiations whose only result is the claim that there's not enough money for health care," stated doctor Marián Kollár, the head of a doctor's labour union in Bratislava.

Kollár said that the wages of medical staff have not increased for the last five years, and that now a 25 percent pay hike is needed to compensate for inflation.

During talks with employees, Valerián Potičný, the director of Bratislava's Teaching Hospital and Polyclinic where Kollár is union boss, proposed only a 10 percent wage increase, citing a lack of funds.

Slovakia's Health Ministry admits that wages in the sector are inadequate, but says it has no right "to enter into negotiations between employers and employees", ministry spokesman Karol Farkašovský told The Slovak Spectator.

"It is important, however, that both sides discuss the issue on a factual level using rational arguments rather than under the threat of a strike," he said.

Apart from higher wages, medical staff are also calling on the government to stop the ongoing transformation of health care facilities into joint stock companies, part of Zajac's plan to force hospitals to behave more economically.

If the government fails to address these problems seriously, Kollár said that doctors would strike at the end of March or the beginning of April.

Kollár's initiative was soon picked up by other health care labour organizations. The Slovak labour union (SOZ), representing around 40,000 employees in health care and social services, said it would accept a 21 percent wage increase.

Kollár's LOZ union represents around 2,000 doctors, half of whom are in Bratislava.

At a March 20 meeting of hospital directors, labour unions and ministry officials, the SOZ presented its 21 percent wage demand.

Zajac promised to "present the demand to the government, although the fact that we do not have the money for the increase is another issue altogether".

Some opposition political parties have come out in support of the doctors' demands.

According to Magdaléna Fajtová, the spokesperson for the Movement for a Democratic Slovakia (HZDS), if the government does not address the threatened strike quickly, there is a risk that patients will receive emergency care only, and that planned operations will be delayed.

"The HZDS believes the demands of health care employees are justified and rejects a [possible] solution based on layoffs," Fajtová said in a statement on March 21.

The opposition Smer has also used the dispute to criticize the government for the state of the health care sector.

Smer Chairman Robert Fico called on doctors to be patient and wait until after elections, promising that if Smer became part of the new government, more money would be diverted to the sector to enable higher wages.

Prime Minister Mikuláš Dzurinda also entered the debate, stating after a cabinet meeting on March 22 that he was willing to discuss the future of health care with the Teaching Hospital employees, and inviting them to a meeting on March 28.

He accused Fico of politicizing the matter and noted that health care employees would not achieve much by issuing threats and using pressure.

The Health Ministry's Farkašovský reported that this year the sector had received Sk5 billion (€134 million) more than last year, of which more than Sk1 billion had gone to drugs and Sk1.7 billion to institutional care.

He said health care employees had to take into account the country's economic possibilities in making their demands.

"All requirements must be based on the real possibilities of the economy. Show me a country anywhere in the world that can boast that its health care system has sufficient funds," Farkašovský said.

The reform of the Slovak health care system aims to improve efficiency and accountability, and to remunerate employees for performance rather than merely time served.

According to Peter Pažitný, a partner with the Bratislava-based Health Policy Institute think tank and one of the architects of the reform, the wages of Slovakia's medical staff are not low given the economic situation in the country.

"Their wages are comparable to those [wages of medical staff] in surrounding states when compared with the country's economy," Pažitný told The Slovak Spectator.