SEVERAL hundred Belarus citizens continued to protest the victory of President Alexander Lukashenko on Minsk's main square following the country's March 19 presidential elections. European diplomats, including a representative from Slovakia, were on hand to support them. 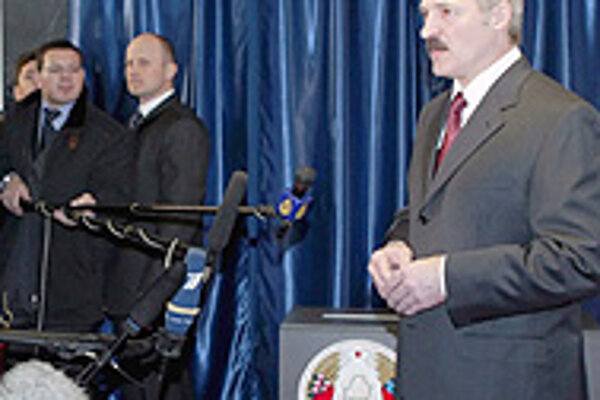 Font size:A-|A+  Comments disabled
SEVERAL hundred Belarus citizens continued to protest the victory of President Alexander Lukashenko on Minsk's main square following the country's March 19 presidential elections. European diplomats, including a representative from Slovakia, were on hand to support them.

The Belarus president, who is regarded as the last dictator in Europe, won the elections for the third time with 82 percent of the vote. Only Russian President Vladimir Putin congratulated him on the victory, however, while the US, the European Union and the Organisation for Security and Cooperation in Europe (OSCE) refused to recognize the results of the elections, saying they had been manipulated.

Most Slovak political parties condemned the course of the elections as well, and called for the vote to be restaged, the daily SME reported.

The head of the Slovak parliamentary Human Rights Committee, László Nagy, who was in Minsk as part of the OSCE monitoring mission, said the elections had not been free and democratic.

Monika Beňová, a member of the European Parliament from the Smer party, was one of seven MEPs who were refused a visa to visit Belarus the week of the elections.

"It's unclear why I didn't get it when they claim to be a democratic country," she told SME.

Slovakia's Foreign Minister, Eduard Kukan, called on the European Union to impose its harshest sanctions over the elections. The European Union Council for External Relations discussed concrete steps against Belarus, including widening the list of Belarus representatives who would be banned from visiting all EU countries.

"Banning them from getting visas by publishing a list of concrete names would have the right psychological effect," Kukan told the TASR news agency, adding that Lukashenko should be at the top of the list.

But Communist Party MP Dagmar Bollová, who also represented the OSCE in Minsk, saw no problem with the elections in Belarus, according to the SITA news wire. She explained that the West was against Lukashenko because the Belarus border is the only one over which the US has no control.

Balázs Jarábik from the Pontis Foundation NGO criticized Bollová's statements on Belarus state television, where she appeared several times in support of the regime, saying it was at odds with the rules of the OSCE, on behalf of which Bollová had been monitoring the race.

The police continued to arrest individuals protesting on Minsk's main square as The Slovak Spectator went to print, but had not resorted to violence.

Jarábik said he expected the regime to toughen its repression after international attention turned to the upcoming elections in Ukraine and Iraq.

According to Pontis, the opposition protests were "mild but massive", although they did not enjoy the kind of support that could reverse the election outcome as happened in Ukraine during last year's "Orange Revolution". However, the demonstrators proved that the democratic opposition enjoys a new and strong status in Belarus society, where European values are highly accepted.

"The citizens of Belarus showed that they won't let the results of the presidential elections be stolen from them," said Slovak Prime Minister Mikuláš Dzurinda.