THE SALE of a 66 percent stake in Slovakia's largest power utility, Slovenské elektrárne, to Italian power giant Enel now stands a fighting chance of being wrapped up before June elections after the Slovak parliament let Enel off the hook for the costs of dealing with spent nuclear fuel. 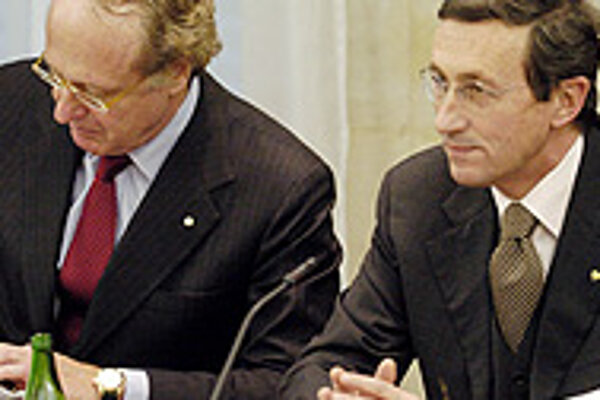 Font size:A-|A+  Comments disabled
THE SALE of a 66 percent stake in Slovakia's largest power utility, Slovenské elektrárne, to Italian power giant Enel now stands a fighting chance of being wrapped up before June elections after the Slovak parliament let Enel off the hook for the costs of dealing with spent nuclear fuel.

By passing the Nuclear Fund Act on March 16, the legislature ordained that Slovak taxpayers rather than the utility's buyer will foot the bill for decommissioning outdated nuclear facilities and handling nuclear waste.

To take effect, the law must still be signed by President Ivan Gašparovič, who has said on several occasions that the state should keep firm control of its strategic energy companies. If Gašparovič refuses to sign, the law goes back to parliament for a repeat vote, testing the legislature's ability to muster another majority in the tense weeks leading up to elections.

The law is needed to cover an estimated at Sk15 billion (€401 million) deficit in the Nuclear Fund. Slovak energy consumers will contribute Sk0.05 per kilowatt-hour of energy to the fund for the next 20 years as of July 2006, or more than Sk850 million annually.

Slovakia's nuclear facilities at Mochovce and Jaslovské Bohunice will also share the financial burden of the Nuclear Fund. The plants will pay Sk350,000 (Sk9,459) for each megawatt of output, plus 5.95 percent of their revenues from electricity sales for the previous year.

The money will be kept on a national nuclear account.

Although the Economy Ministry said Slovakia needed the law regardless of the Enel deal, the legislation is seen as key to Slovakia's getting paid for the SE stake.

Enel has so far handed over only 20 percent of the agreed purchase price of €840 million, and made the payment of the remaining 80 percent of the money conditional on the adoption of the law.

However, just before The Slovak Spectator went to print on March 23, Economy Minister Jirko Malchárek said that Enel indeed will no longer insist on the validity of the law for the completion of the deal.

Only a few weeks ago there were doubts that the Dzurinda government would be able to push through the legislation. After the Slovak cabinet said that decisions on privatization deals should be left to the next government, the political opposition insisted that the sale of Enel, which they have always fiercely opposed, be put on hold as well.

Even after the adoption of the law, the largest opposition party said it would continue to fight the deal. The Smer party objected to the fact that the law had been the main condition for the sale, while Smer's Ľubomír Vážny said the cabinet had no authority to sell the utility.

The Movement for a Democratic Slovakia's Tibor Mikuš, former CEO of the SE utility, also said his party would continue to seek ways to halt the deal.

"It [the law] is unfortunately one of the deferral conditions that could have stopped the privatization. We are certainly considering what else can be done," Mikuš said.

Economy Minister Jirko Malchárek said that the completion of the Enel deal was not the sole reason the law had to be adopted. He explained that Slovakia had to find a way to deal with the huge deficit in the Nuclear Fund.

"We have to pass the law sooner or later, it's not just a question of the SE privatization," Malchárek told the SITA news wire.

Enel, which wants better access to energy sources, is looking at further expansion to the European market, and had earlier eyed the French energy concern, Suez. Enel, which is controlled by the Italian state, cannot expand on its domestic market due to Italian antitrust legislation, but sees growth opportunities in the liberalization of the European energy market.

However, the French government was not enthusiastic about selling Suez to the Italians, and promptly merged the company with the state-controlled Gaz de France, sparking a stormy debate over energy market liberalization. The new EU members said they were upset by energy protectionism in the EU.

The European Union is striving to reshape its energy policies in order to reduce its energy dependence.

Energy prices within the EU have doubled over the past two years.

"The energy challenges of the 21st century call for common European action," said European Commission President José Manuel Barroso, who believes that the Green Book that the EU presented in early March will provide the foundations for a joint energy policy.

As an energy policy strategy, the Green Book is a reaction to the recent Russian-Ukrainian gas crisis and rising energy prices.

Prime Minister Mikuláš Dzurinda said he would restate his support for a joint EU energy policy at the next summit of the European Council.

"Stronger cooperation between member states will improve negotiations with suppliers, which will have a positive impact on consumers," Slovakia's ambassador to the European Union Maroš Šefčovič told the SITA news wire.