Design for the dark and bright

IMAGINE you are living in the dark and you have to use all life's modern conveniences. How easy is it to cook or iron without burning yourself? When do you know you have poured a full glass or how do you know which side of your plate holds the potatoes and which side the meat? 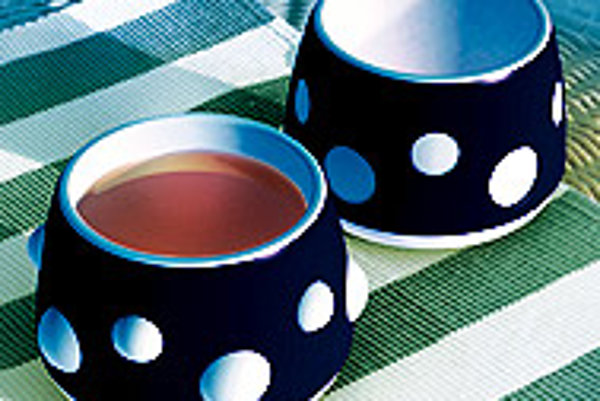 Font size:A-|A+0
IMAGINE you are living in the dark and you have to use all life's modern conveniences. How easy is it to cook or iron without burning yourself? When do you know you have poured a full glass or how do you know which side of your plate holds the potatoes and which side the meat?

To understand what daily troubles people without sight have from the moment they wake up, visit Bratislava's Médium Gallery on Hviezdoslavovo Square. Students of Czech and Slovak design schools have spent enough time with the blind to understand what they need in order to function the way those with sight do.

When closing your eyes, you can "see" their world by running your fingers over the curves and protrusions of

the exhibited cups, pots and dishes and upon opening them you will find attractive designs. You will see intricate, safe to operate kitchen robots, party games that stick with their playing pieces, and elaborate, easy to work with electronic devices. Though most items are prototypes, some have already made it to the industry's production line.

The Design for the Dark, an exhibition for the blind and partially sighted, is an equally enlightening experience for those with sight defects as well as for those with perfect vision.

The project originated in the Czech Republic and was joined by Slovak design students. It has successfully toured Prague, New York and Budapest. Last week it arrived to Bratislava and other cities are queuing to host it.

According to the exhibition's organizers, estimates say that some 4 to 8 percent of the citizens in each society have sight problems. With the IT era in progress and people spending more time behind computers, they predict the number only to increase.

Society is not prepared for such a consideration," said Lenka Žižková, one of the exhibition's curators.

"Almost 300 Czech and Slovak design students joined the project to help bridge the gap between sight and blindness. They were assigned the task to devise and create a new invention or adjust an already existing item that would help blind people in their everyday lives. Visually and aesthetically, the item should not disclose that it is designed to serve the visually-impaired; quite the contrary, it should also appeal to those with sight so that they wish to have it at home.

In the summer of 2004, the students spent hours talking to experts and people who are blind. In cooperation with various institutes helping the blind, they could experience a world of darkness in various simulations. At the same time, they were learning the tricks that help the blind to function.

"None of the groups had known much about each other before," Žižková said, "but in the end they found a mutual path."

The blind produced a list of around 130 things they had the most problems operating and the students set to work. The best results, appropriately selected by the blind, are displayed.

Among other items on show, you can find the "catch it where you want" pot with a special isolated handle run all around the brim, so one cannot be burnt when trying to find the pot's handles. One of the students designed a special and attractive watch for the blind so they do not need to ask fellow pedestrians or transport passengers for the time and thus can avoid bringing attention to their handicap. Another student designer came up with transparent plastic pads that are placed on the bottom of a glass to prevent it from being knocked over.

"You can simply carry it in your pocket and take it out each time you enter a restaurant," Žižková explained.

A part of the project was a vote on the best and most useful object. The award went to Brno citizen, Petr Korecký, who studies design at the Bratislava's Academy of Fine Arts under Ferdinand Chrenka, for his "shoofly" Teapot for the Dark. The teapot, fixed into a special wooden holder, will not spill its volume as its centre of gravity always keeps the contents in the right position, unless you tilt the pot yourself for pouring.

Korecký's professor, when seeing the resourceful work of the students, decided to create one device himself. He made a "nature identifier", which is a kind of scanner-camera instrument that after inserting a feather into it, for example, will tell you about the bird who lost it. "You can learn about nature while being in nature," Chrenka explained.

Considering what a fraction of the population are the blind, the industry will not "go crazy about them", Žižková said.

Nevertheless, several firms have already started to produce some of the designs on show, including Tescoma (kitchen utensils), ETA (household appliances), and Jablotron (electronic security systems and mobile phones).

"It's a question of time, until this segment understands the need to also produce such items," Žižková said.

What:Design for the Dark - design for the sightless and visually handicapped.
Where: Médium Gallery, Hviezdoslavovo námestie 18, Bratislava.
When:Tuesday to Sunday from 10:00 to 17:00 (Thursdays between 12:00 to 19:00) until April 12.
The exhibition's texts are partially in English.