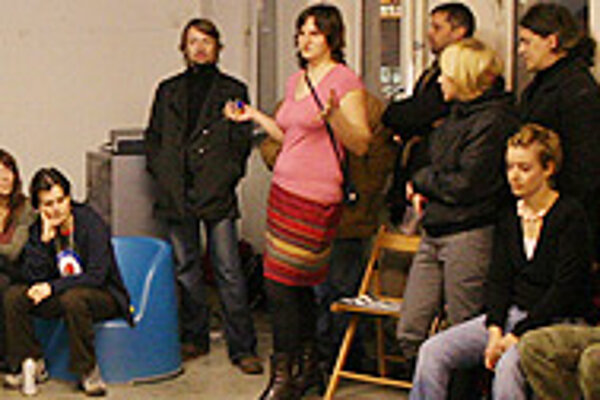 The artistic takeover of the Alas post-factory started in 2004, when Palo Macho and Laco Terén of the Tranzit initiative rented their first hall. Its spaciousness gave them the idea to house artists, and last year, the old factory turned into a large exhibition area that recently welcomed its first creative inhabitants.

Transformation of industrial venues that no longer serve their purpose in progressive art locales, known under the German name "kulturfabrik", is common in the world. The former factory provides the artists with the space they need for exhibitions and discussions, which, in return, revitalizes the obsolete manufacturing zone. Often, the artists also move in and use it as studio space.

Mrvová is one of around 30 artists, musicians and art theorists that have recently started working at the Tranzit Studios, a former administrative space located behind the exhibition halls known as the Tranzit Workshops. The whole area, designated Studená 12, spreads behind the Shopping Palace on the Rožňavská roadside.

"It's important to have a common working place and we are happy that even a group like us got it. We no longer need to discuss our ideas in pubs and then work on them at home," said Mária Rišková from the 13m3 association, one of the area's new inhabitants.

The 13m3, which continues the experiments of the Burundi and later the Buryzone gallery in bringing new media and technologies into culture, plans to organise workshops and lectures on the theme. By the end of April, it will have prepared the fifth annual Multiplace festival, and in summer, it will hold workshops open to spontaneous ideas in the IT-based artistic society. It also plans to open a library at the place that would map the current visual art, complete with a CD and DVD collection.

Its 10 members grouped under 13m3 complement the 30-artist crew that has recently moved to the work studios. Tranzit selected the "new inhabitants" according to their activity on the art scene, also taking into account the problems fresh graduates face when renting a studio.

The artists are offered the working space for free and it is up to them whether they open it to visitors during the Studená 12 public openings, or who they invite in. But, though they are not obliged to participate in public events, Mrvová says, they all are so grateful for having the space, they happily take part in all coming events and display their work.

The public can regularly see their studios during the public openings organised by 13m3 twice a month and during ocassional exhibition openings (see www.13m3.sk). In summer, visitors will be invited to the events more frequently. And as the weather allows, the artists will also stretch their indoor studios outside.

By bringing painters, sculptors, jewellery-makers and multi-media artists together with photographers, architects and art theorists of various generations, Tranzit, as its name suggests, aims to bridge various kinds of art.

The work studios are available only for the Slovak artists, yet the Tranzit initiative - supported through the Erste Bank Group and, apart from Slovakia, also active in Austria and the Czech Republic - regularly invites foreign artists to the Bratislava art factory in cooperation with other artists and institutions.

Between March 17 and 21, for example, Austrian Mumok, the Museum of Modern Art in Vienna, came to exhibit their work.

"It's great that we can share our work also with people from abroad," said Rišková.

Moreover, the Slovak branch of Tranzit, though founded as the last, was the first to find a stable place for its artists. Its Studená 12 art factory, therefore, serves as a meeting platform also to the artists active under Tranzit's two other branches, Mrvová explained.

The prospect of meeting artists and theorists from various fields, which may lead to the creation of mutual projects and local, as well as foreign exhibitions is alluring to many.

"The interest for the studios is great," Mrvová said.