THE PRESSBURGER Klezmer Band (PKB) is back on track. After touring the country with fresh sounds from its latest recordings half a year ago, it now arrives with another CD to celebrate its 10th anniversary. 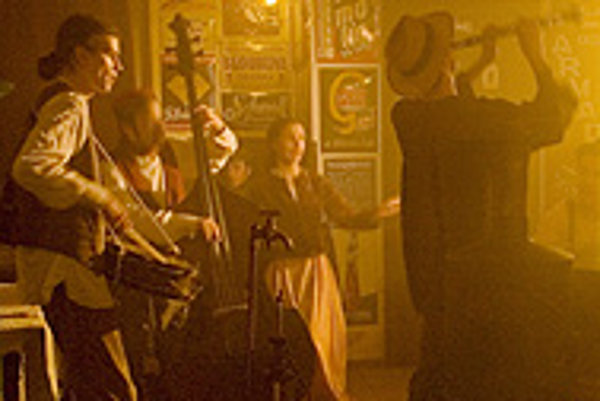 Font size:A-|A+  Comments disabled
THE PRESSBURGER Klezmer Band (PKB) is back on track. After touring the country with fresh sounds from its latest recordings half a year ago, it now arrives with another CD to celebrate its 10th anniversary.

"When we started, it was more or less enthusiastic amateur playing," the band's violinist Andrej Werner told The Slovak Spectator. "We never dreamed that, one day, we would have regular concerts, and by no means even abroad."

The band is now one of Slovakia's top ethno/world music groups. It focusses on klezmer, the folk music of the Eastern-European Jews, which it performs in its original style, as well as in arrangements and combinations with other music genres, including jazz, reggae, Latino-music, and Slovak, Gypsy and Balkan folk.

Its combined sound was recently recorded on the band's fourth CD, Mit Libe... (With Love...), which features 18 tracks dedicated, as the title suggests, to the theme of love. In addition to tunes in Yiddish, such as the hit Donna donna, the CD features arrangements in Slovak that wed klezmer with Balkan and Oriental inspirations, spiced up with pop trends. The band's tour, which started on March 21 in Rimavská Sobota, will culminate in Bratislava on April 1, where, at Petržalka's Zrkadlový háj House of Culture, the band will officially introduce the CD and premiere a music video to the Joške remix, the album's bonus work by Ján Štrasser and Slavo Solovic.

Afterwards, DJ Shmuel and the Balkan Beat Band, a Bosnian-Serbian accordian trio that studied in Bratislava, will take the stage with their temperament and highly improvised Balkan dance music.

Current and former members of the Pressburger Klezmer Band will also join in the 3MRAVCE, which features the "virtual klezmer stars". "It's a project of the band's double bassist Samuel Alexander and former drummer Martin Oros, in which they musically complete two CD projects, Nigunim and Zmiros, by our friends The Klezmatics, Lorin Sklamber and Frank London, with famous pianist Uri Caine and multi-instrumentalist Rob Schwimmer," Werner explained.

Werner also says the band has seen several phases over its 10-year development. "The most important was the idea of the Alexander brothers [Daniel and Samuel, the first of whom left the band in 2003 - ed. note] to launch this band."

Another, he adds, was the band's cooperation with Polish musicians André Ochodlo and Adam Zuchowski, who "opened our eyes in many aspects. They taught us to approach music with more responsibility."

Over the past few years, the band has seen members come and go. It currently has seven musicians, of which only one, double bass player Samuel, has been with the band from its beginning.

Clarinettist Miroslav Lago replaced Erik Rothenstein, who went to study saxophone in Graz, Austria. Drummer Martin Oros, who enlivened the band in 2000 and helped to bring it more among the people, was replaced by 17-year-old talent Viktor Schramek. Werner joined the band as its violinist in 1997. Linda Ballová's characteristic voice accompanied the musicians for five years, but Marta Potančoková took over the role a year ago. The band's current line-up put Pavol Šuška on keyboard and Snežana Jović from Serbia-Montenegro on accordion, whose arrival has brought the band closer to its favourite Balkan style.

Oros, Rothenstein and Ballová will join the band at the Bratislava-Petržalka concert.