THE OPPOSITION Smer party drew bitter criticism from its political rivals after signing a cooperation agreement with five trade unions in a bid to boost its voter support ahead of June 17 elections. 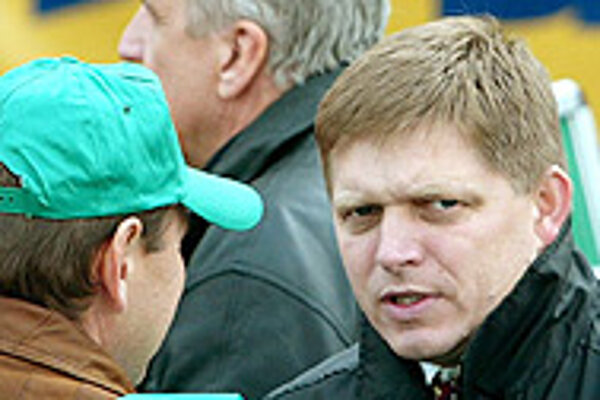 Font size:A-|A+0
THE OPPOSITION Smer party drew bitter criticism from its political rivals after signing a cooperation agreement with five trade unions in a bid to boost its voter support ahead of June 17 elections.

Under the March 23 agreement, unions representing metal, textile, tourism, construction and service workers will openly support the social-democratic Smer in the campaign and will recommend that their 84,000 members do likewise. In return, Smer pledged to advance union concerns if it becomes a member of the new government.

"Smer will do everything it can to repair the state of affairs caused by the right-wing Mikuláš Dzurinda government," Smer Chairman Robert Fico said at a press conference following the signing of the agreement.

Fico promised to renew the "tripartite", a consultation body uniting government, business and labour representatives, if it entered government. The tripartite lapsed under the 2002-2006 Dzurinda administration.

The Smer boss also promised to return the Slovak Labour Code to its original form prior to changes under former Labour Minister Ľudovít Kaník that made labour law more "flexible" and eased restrictions on hiring and firing. Fico promised the new code would be a "standard European" piece of legislation.

Under the agreement, Smer would gradually increase the minimum wage within five years to 60 percent of the national average wage, as opposed to the current 40 percent, and introduce graduated taxes for "above-standard incomes".

A 19 percent flat tax was the centrepiece of the Dzurinda government's reform of public finances, and has been credited for drawing additional foreign investment to the country.

Fico said the latest agreement built on a deal that Smer signed last year with the KOZ umbrella trade union. Union bosses said they wanted more say in politics. "Politics influences our entire lives, so we want to have an influence over politics in a way that we consider to be correct, rather than what others think. We don't want to stand aside," said Kovo union head Emil Machyna at a March 23 press conference.

"We tried to achieve that through other means but we didn't succeed," he said.

Machyna said that cooperation between unions and political parties was common in other countries. He argued that the Slovak labour market lacked balance between business and workers, and that employers in some sectors, particularly those where unemployment is high, were in very strong positions.

But political analysts said that in trying to influence politics, unions themselves would inevitably become politicized.

Soňa Szomolányi, a political scientist with Comenius University in Bratislava, said that although such alliances were legitimate in general, it was doubtful whether "the way it was done here will help the unions achieve their goals.

"In countries where left-wing parties dominate, labour unions have traditionally cooperated with them to advance their agendas. In this case, however, it is questionable what the unions will actually achieve," Szomolányi told The Slovak Spectator on March 27.

"The concern that this move will politicize the unions is definitely justified. In the past as well, labour unions entered politics [in a referendum on early elections in 2000] without having to bear the political consequences," Szomolányi said.

Smer's deal with the unions was slammed by the ruling coalition as well, especially the Slovak Democratic and Christian Union (SDKÚ) party of Prime Minister Mikuláš Dzurinda.

SDKÚ Deputy Chairman Milan Hort told The Slovak Spectator that the agreement showed that some union leaders were willing to "misuse" their unions for personal gain.

He also criticized Smer for promising that donations to trade unions will be non-taxable.

"Why should all Slovak taxpayers have to support the living standards of trade union bosses? If Smer wants to buy these bosses it should use its own money," Janiš said.

Finance Minister Ivan Mikloš of the SDKÚ said that the agreement between Smer and the labour unions would cost jobs rather than help workers.

If the minimum wage today were 60 percent of the average national wage, putting it at over Sk10,000 a month, employers would simply cut lower paying positions, or not hire people for such posts, resulting in higher unemployment and a lower standard of living, he said.

"Robert Fico could seriously damage the economy. He is pulling the unions into politics, and it is also clear that he wants to cancel the reforms [carried out under the 2002-2006 right-wing govern-ment]," Mikloš said.

Whether the deal will actually produce the expected benefits for either party remains doubtful, however.

Szomolányi said that in recruiting the unions Smer had gained "vocal activists for its election campaign," but added that "the labour unions as such, their membership, their prestige and public faith in them have been falling in Slovakia".

She also noted that even if Smer did enter the government after the elections, it might not be in a position to deliver on its promises.

"In a coalition government Smer will easily be able to say that it cannot fulfil some promises because the government's programme is a compromise. The unions must be prepared for this," she said.