ANALYSTS frequently warn that in the years to come it will be increasingly difficult for the countries of Central Europe to attract foreign investors as cheaper labour and new opportunities open up to the East. For now, however, investors remain fond of Slovakia, especially German entrepreneurs, who say they are likely to remain in the country for many more years. 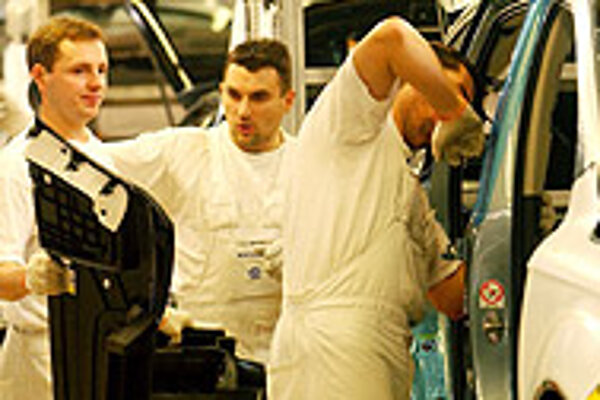 Font size:A-|A+  Comments disabled
ANALYSTS frequently warn that in the years to come it will be increasingly difficult for the countries of Central Europe to attract foreign investors as cheaper labour and new opportunities open up to the East. For now, however, investors remain fond of Slovakia, especially German entrepreneurs, who say they are likely to remain in the country for many more years.

According to a recent survey by the German-Slovak Chamber of Commerce and Industry (DSIHK), German investors ranked Slovakia as the most appealing investment destination among the countries of the Visegrad Four (Slovakia, Poland, Hungary and the Czech Republic).

Almost 90 percent of the 83 German firms operating in Slovakia surveyed said they would choose Slovakia again as an investment destination.

"Only a few countries scored results as good as Slovakia's. This country is booming, as seen in the growth in turnover and profits at German companies operating in Slovakia," said Michael Kern, a member of the board for the chamber.

Kern said that Slovakia was even more popular among investors than China.

Over 50 percent of the firms surveyed rated the current economic situation in Slovakia as positive, while none described it as negative. Meanwhile, 63 percent rated their situation in the country as "good", and only 2 percent were unhappy.

The survey showed that 75 percent of respondents saw their turnover increase in 2005, while two-thirds expected their growth to continue in 2006.

Two-thirds of the respondents believe their costs will increase, while 28 percent expect further growth in wages.

Among the biggest German investors in Slovakia are Volkswagen, Ruhrgas, and the E.ON energy firm.

"About 300 German investors are currently active in Slovakia. The German-Slovak Chamber of Industry and Commerce receives many requests [for information] from German companies interested either in investing in Slovakia or in dealing with Slovak business partners. We expect this trend to continue," the chamber's Markus Halt told The Slovak Spectator.

Halt said that the chamber had done a similar survey last year, but without an explicit comparison of the V4 countries.

"The previous results were similar to the current ones, although the expectations of the German firms were a bit better last year. Dissatisfaction with corruption, legal certainty and infrastructure has also increased in comparison to the last survey. There is also high uncertainty as to political stability after elections [in June]. Nevertheless, German investors are satisfied with their situation in Slovakia and remain optimistic regarding the future," Halt said.

With German chambers in other Central and Eastern European countries having conducted the same survey in each country, a common report about the economic situations and expectations of German investors will be published at the beginning of May.

Meanwhile, the Economist Intelligence Unit (EIU), in its recent survey on entrepreneurial attractiveness for 2006-2010, ranked Slovakia 24th among 82 countries.

The EIU, the business information arm of The Economist Group, ranked the world's 82 largest economies, which together control over 98 percent of global GDP, trade and direct foreign investments.

The ranking takes into account the quality or attractiveness of the business environment as well as the size of each country. It also identifies individual components such as the political and institutional environment, macroeconomic stability, market potential, the orientation of policymakers to foreign investments, the foreign trade and exchange rate regime, the tax system, financing, the labour market and infrastructure.

The EIU expects the business environment in Eastern European countries to continue to improve.

The largest portion of 2005 FDI (Sk7.801 billion) went to Bratislava region, the richest part of the country, followed by the Žilina region, where Kia is building a massive auto plant, with Sk6.974 billion.

The Prešov region, among Slovakia's poorest, drew the lowest volume of FDI at Sk123 million.

The Slovak government recently redrew its investment incentives to steer FDI to regions with high unemployment.

Slovakia's cumulative FDI reached Sk417.02 billion at the end of the year, with the corporate sector accounting for Sk350.379 billion and the banking sector for Sk66.641 billion.

The Netherlands, with Sk91.299 billion, was Slovakia's largest aggregate investor, followed by Germany with Sk81.887 billion and Austria with Sk61.35 billion.

According to the Slovak Investment and Trade Development Agency (SARIO), around 30 potential investors have expressed serious interest in coming to Slovakia.