A HIGHWAY'S total cost should be known before its construction begins, according to a regulation by the Ministry of Transport that went into effect at the beginning of this year. 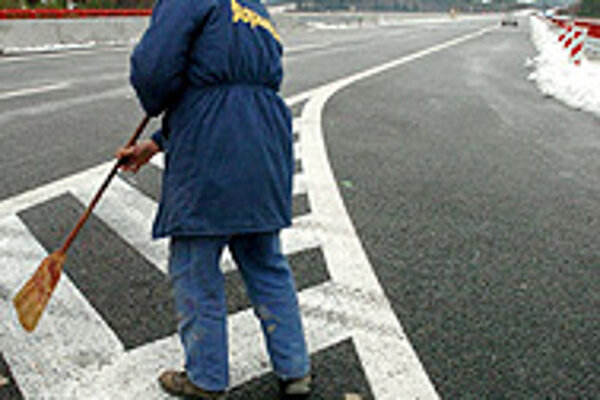 Font size:A-|A+  Comments disabled
A HIGHWAY'S total cost should be known before its construction begins, according to a regulation by the Ministry of Transport that went into effect at the beginning of this year.

Officials are confident the regulation will help to cut the cost of highway construction projects and reduce the number of amendments currently being attached to construction contracts.

The new regulation also requires a construction permit be issued before a tender on a construction project can be announced and that the Transport Ministry confirm the construction is in line with its official timetable and the state budget.

The National Highway Company (NDS) and Slovak Road Administration (SSC), which belong under the Transport Ministry, are the only entities authorized to order such projects. When selecting a construction firm in a tender, the ordering side must take into consideration a price set by a state expert.

"We consider [the regulation], along with the rules concerning a construction permit and the need to have ensured financial resources, as needed and useful. It is an improvement from the previous situation, saves state budget finances and will ensure construction is completed within agreed deadlines," Tomáš Šarluška, spokesman for the Transportation Ministry, told The Slovak Spectator.

Finance Minister Ivan Mikloš admitted that enforcing the regulation will be difficult, but agreed, "we had to take up this step in order to see highways finished by the agreed deadlines and without additional price hikes."

The regulation directs that the rate per unit of certain types of construction activities on highways, speedways and roads of the I. category be fixed. This means that invoices may reflect only the volume of construction that was actually performed. According to the Ministry of Transportation, Postal Services and Telecommunications, if, for example, a geological survey proves insufficient, a supplier or construction firm has the right to increase the costs.

In cases where a construction firm is unable to complete its work by the agreed deadline due to reasons caused by the side that ordered the construction, the price can be adjusted by methods issued by International Federation of Engineers and Consultants (FIDIC) in 1999. New prices can include price hikes of construction inputs and materials, but only for a period from the originally agreed deadline to the new set deadline.

Previous legislation banned fixed prices of construction that lasted more than 12 months. The basic price was set at the same time a tender for a construction supplier was announced. The price was then quarterly adjusted by an index set by statistic analysts according to the situation on the construction market.

Unlike state officials, construction firms are not fond of the new rules.

"Fixed prices have never been the standard, not in the EU, not in the world. A construction firm cannot be expected to estimate all the potential risks - political, currency, macroeconomic, market, inflation," said Peter Halmi, head of the CEO office at Váhostav-SK.

According to Dušan Mráz, general manager of Doprastav, it is naive to think that fixed prices will make road construction cheaper because construction firms will just include potential risks, such as inflation expectations, in their offered price.

Therefore, "the risk is too large for both sides of the process," he said to The Slovak Spectator.

Mráz believes the regulation is a good attempt at reducing construction costs, but feels it could be done in another way, though he failed to be more specific. Doprastav presented that fixed prices can be efficient only to the extent that an investor also keeps to all the terms and conditions.

The Association of Slovak Construction Businesses (ZSPS) argues fixed prices are only acceptable in contracts that last less than 12 months, or else companies will be burdened with additional costs connected to administering tenders.

According to the Transportation Ministry, the country's current economic and legislative environment is strong enough for construction firms to accept the risk of fixed unit rates and prices.

Based on the Programme of Highway and Speedway Construction that goes until 2013, the ministry expects road construction projects to last an average of 24 to 36 months.

Material prepared by the Transportation Ministry states that road construction costs have reached about Sk8 to Sk10 billion (€210 million to €270 million) a year since 1997. The greatest portion of the costs (85 percent) is made up by the construction itself, followed by land buy-out and taxes (12 percent) and planning and surveys (approximately 3 percent).

Source: The Ministry of Transportation, Post Offices and Telecommunications
*Sk1 = €37.7