Loving and being loved

ART can often be both deeply beautiful and intensely sad. Samuel Barber's Adagio for Strings (which played in the background of Oliver Stone's gripping 1986 masterpiece Platoon) springs to mind as a work that ebbs and flows with the courage, vulnerability, and profound longing of love and loss. 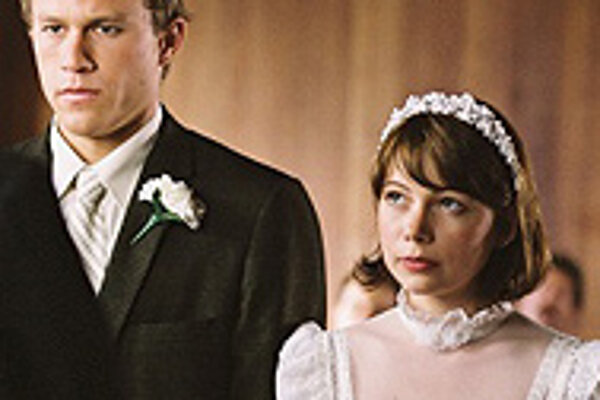 ART can often be both deeply beautiful and intensely sad. Samuel Barber's Adagio for Strings (which played in the background of Oliver Stone's gripping 1986 masterpiece Platoon) springs to mind as a work that ebbs and flows with the courage, vulnerability, and profound longing of love and loss.

A similar beauty runs through every crag of Brokeback Mountain, the heart-breaking new film by director Ang Lee, which won Oscars for Best Adapted Screenplay and Best Director at this year's Academy Awards in Los Angeles. Originally belittled as a "gay cowboy movie", Lee crafts it with the same firm compassion he showed in Crouching Tiger, Hidden Dragon and The Wedding Banquet, which also focused on the intricacies of human relationships.

Equally as generous are actors Heath Ledger as Ennis del Mar, an inarticulate cowboy with an unresolved past, and Jake Gyllenhaal as Jack Twist, a bull rider from Texas who's at peace with himself. The two meet while spending the summer watching over a herd of sheep on Brokeback Mountain in Wyoming, sleeping under the open sky, drinking whiskey, and wolfing down cans of beans.

Ennis eventually reveals a string of difficult truths about his early life, prompting Jack to observe, "Wow, man, that's more words than you've spoke in the past two weeks." "Hell, that's the most I've spoke in a year," Ennis jokes.

And that summarizes their relationship. Jack gives Ennis the love and peace he needs to express what he never could. It makes sense, therefore, when their relationship becomes physical. To the credit of writers Larry McMurtry and Diana Ossana, who based their screenplay on the short story by E. Annie Proulx, the love scenes are tender and passionate, yet definitively masculine, eschewing any stereotype.

Once the summer ends, Jack and Ennis split. Over the years, they marry and have families, reuniting every once in a while for "fishing trips" on Brokeback. Jack wants to start a life together, have their own farm and live happily, but Ennis won't go along with it. "Men just don't live together," he says.

Ennis' wife, Alma (Michelle Williams), soon discovers the nature of the relationship (she sees them kissing) and, after many years of trying to deal with it, divorces him. Williams gives a very sympathetic portrayal of a character the audience knows wouldn't be so angry if her heart weren't breaking. She loves Ennis too, and is the second person to fall victim to his inability to express his feelings.

The story moves on in time until 20 years into the men's relationship. Still meeting for the occasional "fishing trip" on Brokeback, Jack eventually can't take it any more.

"Sometimes I miss you so much, I can hardly stand it," he tells Ennis. "I wish I knew how to quit you."

This inner conflict isn't resolved until the end when, after breaking yet a third person's heart, Ennis faces a tragedy that finally forces him to examine what feelings really reside deep inside. The film's last major scene is heart wrenching, with Ennis full of regret and love.

Luckily, Ennis learns to stop breaking hearts. The last scene shows him agreeing to come to his daughter's wedding. Expecting he'd say he was too busy again, she smiles wide.

NOTE: The film premieres in Slovak cinemas on April 6.