THE FAMILY of great Slovak artist Vincent Hložník (1919-1997) donated 1,000 of his works to Bratislava's Old Town in 2003. Three years later, the public was promised an exhibit at the former Lenin Museum on Štefánikova street. But with the museum still under reconstruction, art-lovers were offered an equally attractive alternative. 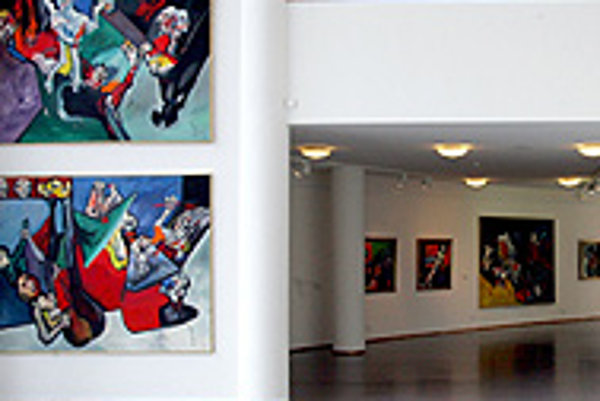 THE FAMILY of great Slovak artist Vincent Hložník (1919-1997) donated 1,000 of his works to Bratislava's Old Town in 2003. Three years later, the public was promised an exhibit at the former Lenin Museum on Štefánikova street. But with the museum still under reconstruction, art-lovers were offered an equally attractive alternative.

Curators Mária Horváthová and Ľudovít Petránsky joined the work of three members of the Hložník family into one exhibition and brought it to the spacious, well-lit Danubiana museum, on the shores of the Danube.

Entitled Continuum, it highlights the artistic link between Vincent Hložník, his daughter, Zuzana Hložníková, and her husband, Ľubo Zelina, as well as their individuality.

"It's an exhibition of European standard," said Professor Petránsky, a close friend of the Hložník's family, explaining that the time had arrived to exhibit the works of Hložník's daughter and his son-in-law next to the great master's.

According to curator Horváthová, from the Slovak Artists' Society, all three artists strove to portray the fate of man in today's world. This theme was discovered independently by each artist, although, Petránsky says, since

they lived together they could not avoid a certain influence on each other's creative process.

Looking at Zuzana Hložníková's expressive black-and-white graphic works, which balance the coloured paintings of her husband and father, the dramatic character and striking contours are a clear evidence of inherited talent and integrated stimuli from her father's constant presence. With her latest works, the influence fades away and she continues on her own way.

Her husband, Ľubo Zelina, experienced Hložník's influence gradually, after he married into the family. "He taught me about life and it was as if peace entered my works," Zelina said. On the other hand, Zelina's colour-eruptive works inspired by cosmic themes seemed to brighten some of the colours on Hložník's canvases.

"Vincent was a pedagogue, he raised the whole generation of artists, so teaching was in his genes. That's why I appreciate that the work of Ľubo and Zuzana managed to extricate itself from such a lecturing 'dictator' and they all went their own ways," Horváthová said.

Interesting also is to compare the works of the husband and wife. Hložníková's clean details of human figures provide a much-needed break after watching the 40 or so of Zelina's and around 30 of Hložník's larger-than-life colour explosions. "Zuzana's clear expression on figure details through which she can tell a lot is so unusual for a woman," Horváthová said.

Horváthová still remembers the books she read as a child, illustrated by Vincent Hložník. "From fairy-tales to biblical motifs, his works had all the attributes of modern styles. The over 300 books he illustrated have shaped our view of the world, from fairy tale heroes to human drama and biblical stories."

According to Petránsky, a weekly visitor to the Hložník's family for over six years, Vincent had sleeping problems and often had up to 30 sketches, some complete drawings, ready in the early morning. The humble and modest family man, as Petránsky remembers him, created some 35,000 works.

"I don't know of a more prolific artist," he said.

With the Continuum exhibition, Danubiana again confirmed the great level of exhibitions it has been sustaining, and which, according to Petránsky, can stand up to any significant European institution. Zelina, who fell in love with the place the moment he saw it, said that he does not fear for Slovak art as long as it has such fanatics as Vincent Hložník, such Vincents with the spirit of Van Gogh, which, by the way, played a significant role in building this gallery in 1999.