FOR THE FIRST time in the history of the country, Slovak health care employees have gone on strike for more pay and better work conditions. The strike started on April 6 at 3:30 pm. 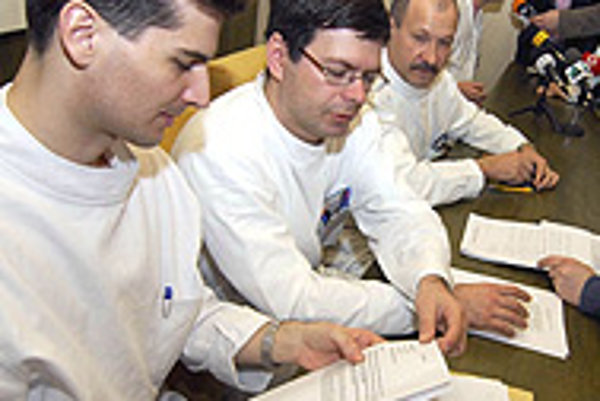 Font size:A-|A+  Comments disabled
FOR THE FIRST time in the history of the country, Slovak health care employees have gone on strike for more pay and better work conditions. The strike started on April 6 at 3:30 pm.

The labour action, which demanded a 25 percent pay increase and greater state funding, was called by a strike committee in Bratislava representing the Teaching Hospital and Policlinic (Fakultná nemocnica, FNsP), which unites four major hospitals in the city. Doctors and nurses had begun protesting low wages in mid-March.

Of all of the economic reforms the Dzurinda government has launched since taking office in 2002, its reform of the health care sector is by far the least popular, both among the public and experts in the sector. The changes include the introduction of minor patient fees for medical services, and above all the privatization of some health care services and the introduction of market principles.

Slovak Prime Minister Mikuláš Dzurinda had met with Bratislava health care employees at the Ružinov Hospital on March 28, but the session ended in disorder, with angry doctors and other health care workers throwing their white gowns on stage next to the PM.

"At his meeting with employees on March 28, Prime Minister Mikuláš Dzurinda disappointed us and failed to convince us. We expected something totally different from him, but he didn't show any interest in solving the situation. On the contrary, he more or less tried to distract attention [from the basic issues]," said Marián Kollár, head of the LOZ doctors' labour union.

The PM argued that the government was increasing funding for the health care sector in general, but had no influence over wages, which were negotiated by individual hospitals and their employees.

The FNsP health care staff rejected this argument and announced a strike at a press conference on April 3. After the news reached the rest of the country, hospitals in Nitra, Banská Bystrica, Prešov and other cities joined.

Health care staff in Prešov had already held protest rallies in their city at the beginning of March, to no avail.

Kollár of the FNsP demanded that the government release money to increase the wages of doctors and nurses, noting that the average wage in the health care sector was around Sk3,000 (€80) lower than the national average wage, which was nearly 18,000 (€480) a month in 2005.

Compared to the national wage, doctors are relatively well paid, earning around Sk30,000 (€800) a month. Physicians complain, however, that their wages are far lower than those of their colleagues in neighbouring states, such as the Czech Republic.

Kollár did not rule out that the local strike, which started in Bratislava, could grow into a national strike by all health care employees.

The Health Ministry was not planning any steps in connection with the strike.

"The Health Ministry respects everyone's right to express their opinion, but regards the protection of patients as the most important issue. Under no circumstances will we allow people to be held hostage to such a dispute, not even where the wages of health care staff are concerned," ministry spokesman Karol Farkašovský told The Slovak Spectator.

"Citizens must always receive the quality and scope of health care they need and that is required by law," Farkašovský said.

According to Kollár, patients will not suffer during the strike.

"We will still be providing acute health care, to protect the health and the lives of citizens," he said.

On the other hand, hospitals were to postpone all planned operations and regular medical examinations, tests and consultations.

Farkašovský said that his ministry was "monitoring the situation", and reported that the Union of Health Care Workers (SOZ) was continuing negotiations, while the LOZ had called for a strike.

One week before the announced strike date, labour, employer and state representatives had met for "tripartite" talks at the ministry's initiative. According to Farkašovský, the meeting "confirmed that the potential of mutual talks has not been exhausted.

"Both sides have to understand their real possibilities and work towards a rational and acceptable compromise," he said.

But the LOZ seemed determined to strike.

Kollár complained that the prime minister had not responded to an open letter that the labour unions sent him earlier last month.

"We consider this not only impolite, but also an expression of offended vanity. The prime minister probably thought he would easily solve this problem during last week's 'pre-election meeting' at Ružinov hospital," Kollár said.

According to Dzurinda's spokesman, Martin Maruška, "the prime minister responded to the letter by holding that personal meeting with health care labour union representatives in Ružinov on March 28".

The Bratislava health care employees want the government to increase their wages by 25 percent, halt the transformation of public health care facilities into joint stock companies, and cover the sector's cash shortfall from the state budget.

At a previous meeting with FNsP Director Valerián Potičný, the labour unions were offered a 5 percent wage increase for lower and middle health care staff, while doctors were to receive a 10 percent increase plus another 5 percent in the form of individual bonuses.

The hospital director argued that the hospital did not have enough money to raise wages by a greater amount. The health care workers turned down his offer.