THE DISCOVERY of 16 T-72 tanks in a farm warehouse in northern Slovakia has renewed suspicions that army stocks are falling into the wrong hands with the complicity of state institutions. 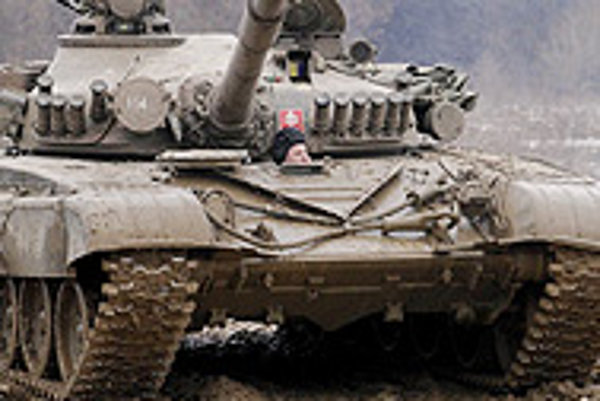 Font size:A-|A+  Comments disabled
THE DISCOVERY of 16 T-72 tanks in a farm warehouse in northern Slovakia has renewed suspicions that army stocks are falling into the wrong hands with the complicity of state institutions.

The fully functional tanks were part of a consignment of 79 T-72s that the Defence Ministry had sold last fall for scrap to the Robus company of Krupina.

In accordance with the 1999 Vienna Document on the disposal of military material, the tanks were to have been converted to scrap at the state-owned VOP Prešov company, a military repair facility. Under the terms of the contract, Robus was obliged to have the tanks destroyed in Slovakia, and was forbidden to sell them to a third party.

Nevertheless, within five days of signing its contract with the Defence Ministry, Robus sold all 79 tanks to the MSM firm of Martin, which in turn stored 16 of the tanks on the premises of the Gader firm in Blatnica pri Martine.

On March 29, Defence Minister Martin Fedor called a press conference to announce that Robus had violated its contract.

"The equipment was stored in a different place than called for in the sales contract, and it had been sold," said the minister.

Jozef Soták of the Železiarne Podbrezová steel company said that a tonne of quality scrap iron fetched about Sk7,000 (€187) on the market. With the T-72 weighing slightly over 42 tonnes, the average sales price, if the tanks were indeed intended for scrap, should have been Sk280,000 a piece, he said.

A source close to the investigation confirmed for The Slovak Spectator that the tanks had been sold to Robus for Sk22.5 million by the Acquisitions and Investments Section of the Ministry of Defence, for a unit price of about Sk284,000.

On the other hand, the source said, such tanks could fetch "dozens of millions of crowns" each on international markets; the source said there were indications that the T-72s were to have been sold to Iran.

"I have no idea how they would have got them over the border," the source said. "After all, how do you disguise a tank?"

Asked if the sales price on the tanks had not been too low, Fedor responded: "I can't say. In the past we held tenders with far lower sums. Every item was evaluated by a court-appointed appraiser."

After the case came to light at the end of March, a document was mailed anonymously to several media and the Attorney General's Office detailing what appears to be a clandestine arms dealing network within the Defence Ministry.

The 8-page document linked the network to the leadership of the ministry through the VOS military intelligence section.

Former Defence Minister Juraj Liška and current Defence Minister Martin Fedor are both members of Prime Minister Mikuláš Dzurinda's SDKÚ party, while Mikuláš Balogh, the former head of the modernization section at the ministry, and for five months an advisor to Fedor, works for Robus. He denied having anything to do with the deal.

"I work with this company on a contractual basis. I am in charge of repairs to armoured cars, I represent a Czech company," Balogh told the Pravda daily.

Other former senior Defence Ministry officials who today work for Robus, according to Pravda, include Ján Sokol, who is in charge of the company's trade in weapons.

When the case was first unearthed by police, it was placed under an information embargo by Dzurinda and Fedor, the anonymous document claimed. The information was confirmed by The Slovak Spectator's source.

The deal is not only suspect because of the personal links between the firms and current or former ministry personnel, but also because the ministry did not have to sell the tanks to Robus - it has its own means of scrapping military material, including military repair facilities (VOPs) in Trenčín and Prešov, and therefore could have kept the profit from the scrap.

Further, while the military repair facilities have class B licenses allowing them to destroy weapons, Robus does not.

"Something is wrong here if the Defence Ministry sells tanks to companies that don't have a license to destroy them and don't even have anywhere to store them," said former Army Chief of Staff Jozef Tuchyňa.

Robus has so far not provided an explanation of the case. "We will not respond until after April 11, when the managing director returns from abroad," said the firm's Tomáš Križan.

The Defence Ministry has some 200 T-72 tanks that it plans to dispose of in line with the modernization of the army and Slovakia's military capabilities as a NATO member.

Because NATO has such strict conditions on the liquidation of excess weapons, however, including the requirement that the weapons be destroyed in front of NATO witnesses or recorded on film, the recent discovery of the 16 T-72s in working condition in a potato warehouse could undermine confidence in the ministry's past and future disposal of its excess weaponry.