Chmel back in harness as culture minister

ONLY 10 months since taking the job of culture minister, František Tóth was fired after sending thousands of letters to teachers across the country at public expense, letters that his cabinet colleagues considered to be a promotion gambit for his non-parliamentary Nádej party. 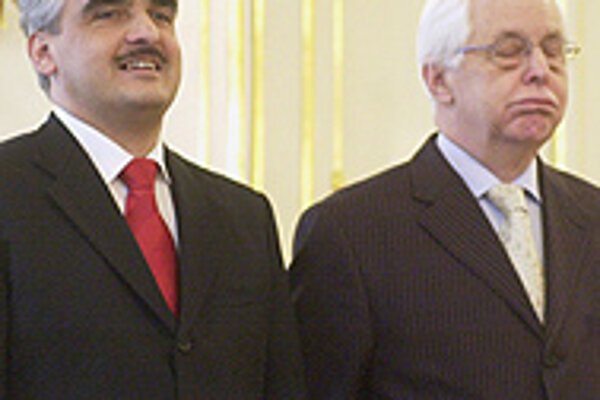 Font size:A-|A+  Comments disabled
ONLY 10 months since taking the job of culture minister, František Tóth was fired after sending thousands of letters to teachers across the country at public expense, letters that his cabinet colleagues considered to be a promotion gambit for his non-parliamentary Nádej party.

On April 5, President Ivan Gašparovič officially recalled Tóth at the request of PM Mikuláš Dzurinda. In his stead, the president named Rudolf Chmel to the culture ministry job, sending Chmel back to the post he had lost to Tóth in 2005.

Chmel, who is expected to serve out the two months remaining before general elections in June, said at the nomination ceremony that one of his reasons for leaving the post a year ago was his feeling that the culture sector did not enjoy strong support within the government. He stressed that "without culture, every nation heads towards extinction".

As Chmel was taking his seat, Tóth reiterated even during the official Presidential Palace ceremony that he did not think the letters were sufficient reason for the PM to fire him. He claimed to be a victim of the competition for voter support ahead of the June 17 national elections

"I leave knowing that people should not be afraid of those who make occasional mistakes, but of those who lie," Tóth said, adding that he was being forced out because of "the voter support of those who are afraid for their posts".

Prior to confirming Chmel, President Gašparovič suggested via his spokesman Marek Trubač that he would prefer it if the culture minister seat remained vacant until the end of the election term.

Political scientist Miroslav Kusý of Bratislava's Comenius University agreed that it was unlikely Chmel would accomplish anything substantial in the two months remaining before general elections.

This opinion was shared by some political parties as well. The opposition Free Forum (SF), for instance, on March 30 called on Dzurinda not to install a new culture minister.

SF head Zuzana Martináková even alleged that the PM was trying to inflame the Culture Ministry situation to conceal the problems in Slovakia's health care system, where health care employees from Bratislava went on strike on April 6 (see front page story).

The PM said, however, that there are projects that need to be completed in the culture sector, such as the planned opening of the new Slovak National Theatre building.

"There is a lot of work to be done at the ministry," said the PM during the April 5 ceremony.

Tóth, who spent just 10 months in the post, was a frequent target of opposition attacks and was deeply unpopular with the cultural community.

The new minister inherits several hot potatoes from his predecessor, including the planned sale of what the ministry regards as superfluous buildings and plots of land, which it intended to sell to the highest bidders in tenders. Following major opposition to the plan from the political opposition, which threatened to bring down the government if the sales went through, Dzurinda intervened to stop the tenders.

Tóth also had a series of conflicts with the cultural community, such as over the ongoing job tender for the head of the Slovak National Theatre (SND). Artists and other culture figures objected to Tóth's efforts to bring business principles into the culture sphere. Critics also said that Tóth was not respected in the culture community and lacked a feeling for culture.

The opposition Movement for a Democratic Slovakia (HZDS) had opposed Tóth's nomination to the post, and had later tried to have him recalled by parliament.

At a press conference at the end of March, Dana Podracká of the HZDS said that the 66,000 letters sent by Tóth at taxpayer expense had been "the last drop in an already full glass".

Among the other problems the HZDS and members of the cultural community had with Tóth as minister was his plan to abolish the Slovak Design Centre, the lack of funding for literature, and the reduction by 70 percent of Bratislava's protected historical core, which would have paved the way for the construction of large and modern buildings in historically natural and residential areas.

President Ivan Gašparovič had initially hesitated when he was asked by the prime minister in early 2005 to name Tóth to the post.

Prior to coming to the Culture Ministry, Tóth was deputy education minister. He left that ministry after several conflicts with then-Education Minister Martin Fronc. At the time a member of the New Citizen's Alliance Party (ANO), Tóth left the Education Ministry and waited until another ANO member, Rudolf Chmel, left his cabinet post. It was alleged at the time that ANO had pushed Chmel out to make room for the ambitious Tóth.

PM Dzurinda indirectly confirmed that Chmel had left under pressure from ANO when he said that Chmel's return to the ministry would be a "sort of moral satisfaction" for the former minister.

According to the HZDS' Podracká, unlike Tóth, Chmel enjoys respect among Slovakia's cultural community. Formerly a university literature professor and culture magazine editor, Chmel served as Czechoslovakia's ambassador to Hungary from 1990 to 1992.

"He is a personality who can help maintain a certain political balance rather than someone who divides both the political and cultural communities," Podracká said.

Changes in the current government:

* Defence Minister Ivan Šimko is fired in September 2003; the SDKÚ party's Juraj Liška is named to the post

* Tóth, who until then had served as deputy education minister, takes up the Culture Ministry post in June 2005

* The cabinet fires Economy Minister Pavol Rusko in August 2005 over a scandal involving Sk100 million in IOUs that Rusko signed; the move splits the ruling coalition, and ANO leaves the government for the opposition

* Defence Minister Juraj Liška gives up his post in February 2006 following the crash of a military airplane that kills 42 Slovak soldiers; the SDKÚ's Martin Fedor replaces him

* Cabinet ministers for the Christian Democratic Party, including Interior Minister Vladimír Palko, Justice Minister Daniel Lipšic, and Education Minister Martin Fronc, leave the government in February 2006 after a dispute over a proposed treaty with the Vatican; the three are replaced by their respective deputy ministers: Martin Pado, Lucia Žitňanská, and László Szigeti