IN 2005 Slovakia produced about 218,000 cars, 5,000 less than in 2004. So far, auto industry output is giving few signs that Slovakia will soon become world leader in per-capita car production. 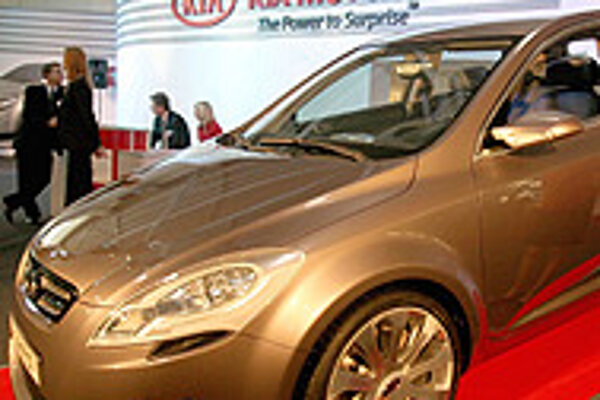 However, just as all storms begin with a moment of silence, the French PSA Peugeot Citroen and Korean KIA Motors Slovakia are set to launch production this year, while after a temporary fall in output to bring in a new line, Volkswagen Slovakia's production should begin to grow as well.

According to the Slovak Automotive Industry Association, when all three carmakers hit full capacity after 2008, Slovakia will be producing from 800,000 to 1.1 million cars annually, or 148 to 204 cars per 1,000 inhabitants.

So what will they be making? Recently, all three carmakers introduced the models that Slovaks will soon be very familiar with.

Volkswagen Slovakia, which was founded in 1991 and has been producing since 1993, remains the only car plant officially in operation in this country.

"Car production fell in 2005 compared to 2004 for two reasons. The first is that the Slovak crown strengthened from 40 SKK/EUR to 38 SKK/EUR. The second was the launch of production of the new Audi Q7," Volkswagen Slovakia spokesperson Silvia Nosálová told The Slovak Spectator.

Nosálová added that Volkswagen had to rearrange its whole production line to accommodate the Audi Q7. According to the Trend business weekly, Volkswagen had to change more than 80 percent of its technology and, for example, completely rebuild its painting hall. Production of the Audi Q7 started in October last year.

Volkswagen Slovakia invested €62.5 million last year in its plants in Bratislava and Martin, and 50 percent more than that in 2004.

"This year the number of cars produced should grow again, partly also because of the fact that Audi increased its orders for the Q7, which is evidence of their quality," Nosálová said.

VW should produce 220,000 cars this year, driven by the Q7, the VW Touareg and Polo, and the Porsche Cayenne.

In January this year, PSA Peugeot Citroen unveiled its Peugeot 207 model, which is to be produced in its new Trnava car plant. Apart from Slovakia the car should be produced also in Poissy in France and Madrid in Spain.

The main parts of the plant in Trnava - the pressing, welding, painting, and assembly halls - have already been approved in test operations. At the beginning of this year, the company started pre-serial production of several vehicles a day to work out the kinks.

"We should start serial production at the end of June. By the end of this year we should produce around 60,000 Peugeot 207s. Next year we will be up to 240,000, and we should reach full capacity of 300,000 in 2008," said PSA Peugeot Citroen Slovakia GM Alain Baldeyrou for The Slovak Spectator.

The launch of pre-serial production was complicated when the US firm Haden, which was building the painting hall, went bankrupt, leaving Haden's Slovak suppliers disappointed, according to the Trend business weekly.

According to the weekly, the French parent company is showing that the plant in Trnava will have an important position within the concern. Apart from the fact that it should be the largest Peugeot 207 producer, PSA wants to extend its production in Slovakia.

The company recently introduced a new €350 million project to increase production capacity by half.

KIA Motors is taking aim at the lower end of the European market with a car produced in the future Žilina plant called the Cee'd.

KIA Motors introduced the Cee'd concept car to the Slovak public at the 16th Autosalon Bratislava international car show 2006 in March this year. The new car was designed by a development centre in the German Russelsheim.

Test production at the Žilina car plant should start at the end of this year, while the new car should reach dealers at the beginning of 2007.

Trend wrote that in 2007 the hatchback model should get a sister, the SW (station wagon), and later its sports model.

THE LAUNCH of full production at Slovakia's car plants in 2007 and 2008 could add one percentage point to Slovakia's already torrid GDP growth, the SITA news agency wrote.
The International Monetary Fund expects the Slovak economy to grow by 6.3 percent in 2006.
VÚB bank analyst Martin Lenko said the automotive industry's contribution to the GDP growth rate could be even higher thanks to investments financed through state incentives and by car-plant suppliers.
According to the analyst, the concentrated production will spin off logistics centres and higher added value activities such as research centres.
The Slovak Automotive Industry Association (ZAP) estimates that Sk1 billion to Sk1.5 billion (€30 million to €40 million) could be required to build Slovak research centres. Despite the high costs, these centres are regarded as crucial to putting Slovakia among the world's automotive powers.