MOVIEGOERS have been swamped with an inordinate slew of remakes in recent months (King Kong, Charlie and the Chocolate Factory, and War of the Worlds, just to name three), the vast majority of which fail to live up to the original. 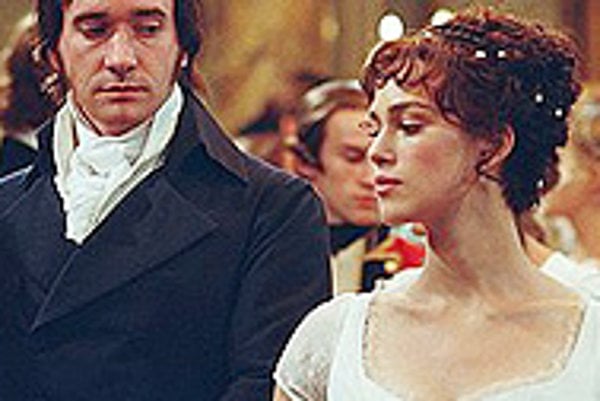 MOVIEGOERS have been swamped with an inordinate slew of remakes in recent months (King Kong, Charlie and the Chocolate Factory, and War of the Worlds, just to name three), the vast majority of which fail to live up to the original. What a shame, therefore, if director Joe Wright's new version of Pride and Prejudice, the Jane Austen novel that was last remade as a splendid 1995 BBC miniseries starring Colin Firth, was ever greeted with even an ounce of suspicion. It deserves far better than that.

In fact, Elizabeth Bennet (Keira Knightley), the second oldest of the five Bennet sisters, would have no problem telling you that herself. She's ahead of her Victorian times as an elegant, yet proud young lady from a middle-class family who never shies from repartee, especially with the rich and dashing Mr Darcy (Matthew MacFadyen).

A woman's survival, and even that of her family, depended completely on the wealth of her future husband, though, which is why the whole family, especially Mrs Bennet (Brenda Blethyn) is so excited when Darcy's wealthy friend, Mr Bingley (Simon Woods), courts Elizabeth's older sister, Jane (Rosamund Pike). Elizabeth, on the other hand, declines a proposal from Mr Collins (Tom Hollander), an overly earnest minister who would adequately secure the family's finances. Her reason is heartfelt:

"You could not make me happy, and I am convinced that I am the last woman in the world who would make you so," she tells him.

Her real chemistry is with Mr Darcy, who initially judges her for being from a lower class. After overhearing him call her "tolerable" at a ball, Elizabeth engages in some verbal jousting.

"I had always thought of poetry as the food of love," Darcy comments.

"Of a fine stout love it may," she responds, "but if it is only a vague inclination, I'm convinced one poor sonnet will kill it stone dead."

"So what do you recommend, to encourage affection?" he inquires.

"Dancing, even if one's partner is only tolerable," she quips.

This tug-of-war continues as Elizabeth and Darcy repeatedly jump to conclusions about each other. The fact is they're both good people who pull apart when judging each other, but finally come together by learning to overcome their faults.

Keira Knightley struck a perfect balance between Elizabeth's steely pride and delicate elegance. Her bite was severe and her affection sweet, which, as a young actress who's relatively new to starring roles, showed an impressive control of dramatic dynamic.

Matthew MacFadyen also delivered some pleasant surprises, explaining Darcy's behaviour by portraying him from the beginning as more shy, despite the responsibilities of his social rank, than the usual snobbish and indifferent. This seemed appropriate when taking his own words into account:

"I... do not have the talent of conversing easily with people I have never met before," he tells Elizabeth.

Credit is also due to writer Deborah Moggach, who maintained the dialogue's distinctive flair and streamlined quite a dense commentary into an effective two-hour format.

One wishes more remakes would follow on this path. Taking a line from Elizabeth, we could more easily forgive their vanity if they would not wound ours.