WHEN the Mountains and City Festival switched venue from a club-like atmosphere to the Aupark shopping mall in 2004, it lost a lot of its orthodox fans. It also picked up some new ones, though, who probably never would have sought it out before. 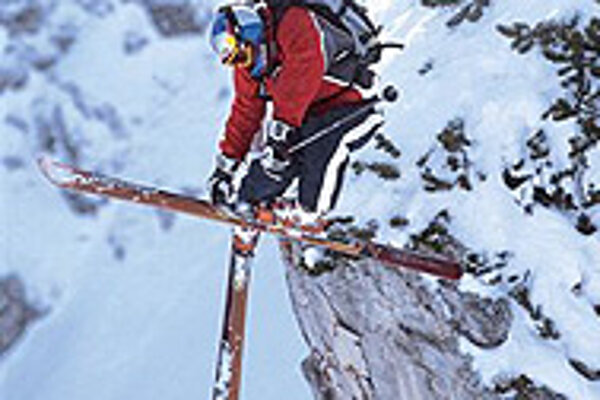 WHEN the Mountains and City Festival switched venue from a club-like atmosphere to the Aupark shopping mall in 2004, it lost a lot of its orthodox fans. It also picked up some new ones, though, who probably never would have sought it out before.

This new interest has helped the event grow and attract more international guests, some of whom, like the venue, might not fit everyone's tastes.

One of them is Timmy O'Neil, "the world's most outrageous climber", an American who began by climbing tombs and mausoleums in a Philadelphia cemetery. Also known as the "climbing comedian" for his no-holds-barred humour and showmanship, O'Neil has a penchant for "buildering", or urban climbing, without a permit, which keeps the police on his heels.

"He is really out there doing crazy things," says Alan Formánek, the festival's director, who also runs the Vancouver International Mountain Film Festival in Canada. He met O'Neil there in February and invited him to Slovakia, joking that he might get him to climb one of Bratislava's skyscrapers, for example, the 88-metre-high VÚB bank building.

O'Neil is also a "super-fast climber", Formánek adds. He has climbed the world's tallest mountains, from Pakistan to Patagonia, and often combines several routes in the course of 24 hours. Until recently, he held a world record with climbing partner Dean Potter for climbing The Nose in Yosemite National Park, where they also climbed three large walls - totaling 3,000 vertical metres - in one day.

"Moreover, he climbs with paraplegics and quadriplegics," says Formánek. "Two years ago, he climbed The Nose with Warren Mcdonald from Australia, who has amputated legs. Just recently, he did a similar, seven-day

ascend with his brother Sean, who is paralysed from the waist down."

O'Neil's borderless moun-taineering enjoys success among climbers, as he respects the sport's unwritten rules. "The climbing community is with him. He breaks the laws of society, not the laws of the nature, which would be unacceptable," says Formánek, who hopes the two will do some climbing in nature.

After Slovakia, O'Neil might be spotted climbing the Teplické skály (rocks) or the Český Ráj (Czech Paradise) in the neighbouring Czech Republic before moving on to Poland.

Meanwhile, you can meet him, hear about his experiences and watch his films at the Mountains and City Festival in Aupark's Palace cinema. O'Neil promises it will be a "scandalous" happening, starting Friday, April 21 at 20:00.

This year's Mountains and City Festival will bring more than 50 films from 13 countries to the Palace Cinemas between April 20 and 23. Traditional participants France, Poland, USA, Canada, Germany, England, Switzerland and Austria will be joined by Argentina, Kazakhstan, Finland and Sweden.

Dodo Kopold, Slovakia's best climber, will open it with his ascent to Great Tango Tower on April 20 at 19:00. Visitors will also see him in a film about his climb of the peak in Karakoram, made by Pavol Pekarčík and Ivan Ostrochovský and produced by Slovak Television. Organizers consider the documentary's success remarkable considering public television's lack of interest in domestic productions.

The festival's four usual themes - Rock, Earth, Water and Air - were enlarged this year to include Snow and

Bicycle sections, which split from the Water and Earth themes. According to the organizers, time has shown these new themes are strong enough to stand on their own.

Within the Snow theme is the Polish-Italian production Shisha in Winter, about Polish climbers' first journey to Shisha Pangma in windy, frigid conditions, and Whiteout: A Journey Beyond the Shadow, the touching story of Jasiu Mela, a 16-year-old disabled boy who dreams of journeying to the North and South Pole in one year.

On a personal note, the festival will also welcome one of O'Neil's best friends, Austrian climber and photographer Heinz Zak, a legend of solo climbing. The two haven't seen each other in a long time and it remains to be seen whether Zak will have the courage to come in traditional Tyrolean lederhosen, which O'Neil once made fun of.

The festival is screening a higher number of Slovak movies compared with previous years. Seven of nine are competing for the festival's prize.

Fans of the Slovakia's leading director Pavol Barabáš can watch a selection of his films as well as deleted scenes from his movies and previews of new projects.

Some of the festival's dominant films capture the old-new free-solo climbing technique above sea level known as "deep water soloing", or "psicobloc", such as Malta from Canada or Vietnam from the USA.

In Bachar - The Man, The Myth, The Legend, director Jim Reardon assembles a picture of the "visionary soloist" John Bachar, the famous climber who invented the Bachar Ladder in the 1970s and 80s. Reardon will himself star in Peter Mortimer's Rebels with Paws (production by O'Neil).

The touching documentary Unconquerable Summit looks at the life and tragic death of Kazak famed climber Anatolij Bukrejev. Walking the West is an epic-comic report on journeying from Mexico to Canada on foot.

And if you want to see the son of controversial rocker Ozzy Osbourne 30 kilos lighter and climbing El Capitan, go to Jack Osbourne: Adrenaline Junkie.