JUST eight weeks before general elections, Slovak voters still know little about the programmes the parties competing for their votes will be fielding. 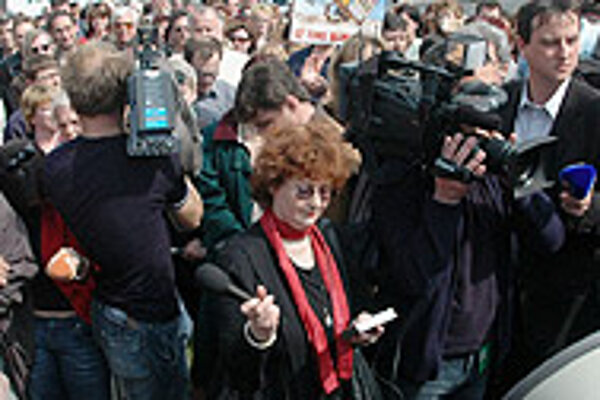 Although politics already dominates the local media headlines, few parties have yet presented their election agendas, and the public debate focuses largely on the alleged gap between the current right-wing parties of the government, especially Prime Minister Mikuláš Dzurinda's Slovak Democratic and Christian Union (SDKÚ), and the strongest opposition party, the social-democratic Smer.

While Smer and the SDKÚ have been consistently at odds on the major issues of the day, including economic reforms and political corruption, none of Slovakia's parties have rejected outright the possibility of forming a future coalition government with any other (with the exception of the Communist Party).

"The Communist Party has the least coalition potential and is very unlikely to be part of the next government, although it cannot be completely ruled out," said Pavel Haulík, a political analyst with the MVK polling agency, for The Slovak Spectator.

"All other [major] parties, however, are better off in terms of the coalition potential."

Even the opposition Movement for a Democratic Slovakia (HZDS), which led Slovakia into international isolation during the 1994-1998 Vladimír Mečiar administration, no longer seems to be an unacceptable partner. The HZDS failed twice in a row to form a government despite winning the general elections in 1998 and 2002.

"Everything depends on the actual election results. Not even a coalition between Smer and the SDKÚ can be completely ruled out, although it is very unlikely," Haulík said.

According to the analyst, Slovakia could even see another right-wing government emerge from the June 17 general elections.

"If the [current ruling] SDKÚ, the Hungarian Coalition Party (SMK), and the [former ruling conservative] Christian Democratic Movement (KDH) manage to gain at least as many votes as Smer, it is possible that another right-wing government will be formed," said Haulík.

To create a majority government, however, the three former partners in the 2002-2006 administration would have to take on one more partner. The Free Forum (SF), a group of SDKÚ defectors, and the HZDS have been mentioned as possible partners in this situation.

"The HZDS is desperate to become a ruling party after eight years out of power and calls itself a centre-right party. The SF is another possibility, although it still cannot be completely sure of winning seats in parliament," Haulík said.

While former enemies may now be eyeing each other as possible partners and sheathing their sharper rhetoric in anticipation, the parties still have yet to produce their programmes, which in more mature democracies represent a major tests of political compatibility.

Several parties have outlined some general goals to be achieved after elections, a somewhat futile exercise as it is almost certain that no party will be strong enough to call the shots in the next coalition government.

Smer, for example, has listed a number of radical changes it intends to make to the right-wing reforms the Dzurinda government launched, including scrapping the flat tax, introducing a tax on dividends, and remaking the pension reform.

The KDH has suggested it would push for a declaration of "tax sovereignty" for Slovakia in the European Union that would bind the government and parliament to resist any efforts by the EU to harmonize the national tax systems of individual member states.

The KDH has also floated a number of trial balloons, sensitive changes that it failed to push through in the past two governments, such as new abortion legislation or a law granting special protection to traditional marriages.

The SDKÚ has insisted that reforms must be continued after the elections to ensure that Slovakia's economic and social development is sustainable and that the country continues to profit from the positive trends started under the current government.

Programmes are apparently on the way, with the HZDS scheduled to hold a programme conference on April 21, and other parties expecting to have something to reveal by the end of the month.

One reason they may be late is the unexpected shift in the election date from September to June after the KDH quit Dzurinda's government in January this year. SMK Chairman Béla Bugár admitted recently that political parties had been caught unprepared by early elections and might therefore take a bit longer to produce election programmes.

Yet despite the missing programmes, political analysts believe that faces rather than agendas will sway the public ahead of the elections.

"Ever since 1989, [Slovak politics] has always been about personalities rather than programmes. In the initial years [of democracy after the fall of Communism] party programmes were viewed as a formality. Now, all parties have them, but nobody wants to read them. I don't think that even politicians themselves read what they have written," said political analyst Samuel Abraham.

"In Slovakia there is no tradition of taking election programmes seriously. It's a question of who says what, what he or she represents, and what his or her past is," Abraham said.

Miroslav Kusý from Comenius University's political science department agreed that the lists of party nominees were far more important than their programs, which in his opinion play only "an auxiliary role".

"Few people read the full party programmes, but the basic principles from their programmes, which political parties stress during the election campaigns, do have an influence on voters," Haulík said.

"One of the most important questions ahead of the elections will be rejection of or support for reforms. This will serve as an orientation point to voters."