THE REPORT on the activities of the Slovak Information Service (SIS) presented in parliament on April 20 by SIS Director Ladislav Pittner was, by all accounts, a yawner. 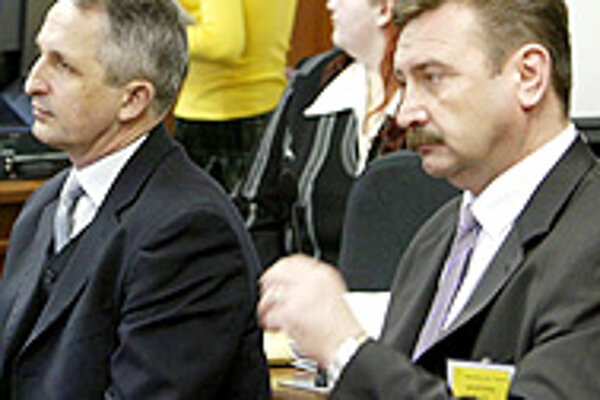 Font size:A-|A+  Comments disabled
THE REPORT on the activities of the Slovak Information Service (SIS) presented in parliament on April 20 by SIS Director Ladislav Pittner was, by all accounts, a yawner.

Only 30 MPs out of 150 MPs showed up to hear the report in a closed-door session. Pittner spoke in general terms of a lack of transparency at government ministries, according to independent MP Rudolf Žiak, but named no names. "It was very cautious so that nothing could be used in the pre-election fight," he said. "There's no reason it couldn't have been made public."

The bland content of the official SIS report gave no sign of the ferment that has surrounded the secret service since one of its agents was unmasked in early April and caught apparently meddling in a high-stakes political trial.

The identity of SIS agent Dana Arpášová, the wife of the head of counter-intelligence at the SIS, Ľubomír A, came to light after she made a court appearance at the bribery trial of the mayor of Rača, Pavol Bielik, a member of the former ruling coalition Christian Democrats (KDH) party.

Arpášová, who uses the code name Kováčová, had been summoned to court to explain why she had approached a senior official at the Special Court for political corruption and organized crime, where Bielik is being tried, to ask about the Bielik case.

The official made a log entry of the interview with "Kováčová", quoting her as saying that "we have a lot of information about it [the case]. It is drifting in a different direction than we planned."

Special Court Chief Justice Igor Králik told the agent that "I am not happy with the way your institution is interfering with the independence of this court", and on April 19, in an appearance before the parliamentary SIS Oversight Committee, repeated his opinion that Arpášová had been meddling.

"I'm glad this came out in the media, and I told them that we would publicize every attempt at interference," Králik said after his appearance before the committee.

The Bielik case is being watched closely because it is the first time in Slovakia's history that such a highly placed politician has gone on trial. The Rača mayor is accused of demanding a Sk5 million bribe from a local businessman in return for arranging planning permission on a construction project.

Until recently he was the leader of the Bratislava branch of the KDH and the deputy governor of the Bratislava region. Before it left the ruling coalition in January, the party also controlled key police and court posts through Justice Minister Daniel Lipšic and Interior Minister Vladimír Palko.

Arpášová wore dark glasses in court and was virtually monosyllabic, although in the end she admitted having known Bielik personally for three years. As she left the building a shot of her face was caught by the TA3 TV news station and beamed across the country.

She was recognized by her former colleagues in Levice, where she had been a schoolteacher and a member of the Slovak National Party (SNS) running for a seat on the local council.

According to SIS Oversight Committee Chairman Viliam Soboňa, a member of the opposition Movement for a Democratic Slovakia (HZDS) party, Arpášová was a member of the SIS and the SNS at the same time. SIS rules forbid agents from being members of political parties.

"Her connection with a political party is absolutely clear, there's no room for doubt," he said.

Anna Belousovová, the No 2 on the SNS candidates list for elections, accused Vladimír Mečiar's HZDS of having originally infiltrated Arpášová into the SNS while the two parties were in government together from 1994 to 1998.

"It was around mid-way through the coalition that this woman joined the SIS, so you can see the kind of structures that might have been behind the break-up of our party.

"Still, you can't pin everything on Mečiar, because this woman is still a member of the SIS now. That means that while we are dreaming and talking about democracy and moving towards the West, these dirty, totalitarian methods are still being used," Belousovová said on a talk show on TV Markíza.

Pittner has not confirmed that Arpášová was a member of the SIS and SNS at the same time, but has set up an SIS commission to investigate the allegations, and promises to have an answer within several weeks.

However, he has dropped his initial defence that Arpášová was "only doing her job", and said after appearing before the SIS Oversight Committee on April 19 that "she had no business asking about Bielik.

"She exceeded her authority, maybe from a kind of professional deformity, as she works in the section covering corruption in the state administration."

The Arpášová scandal may not be the only internal blow the SIS takes before elections. The Pravda daily reported on April 13 that the SIS was looking into an anonymous tip that its head of inspection, Anton Rázga, had ties to the Takáč organized crime group based in Bratislava.

According to the business register, a man by the name of Anton Rázga was on the board of directors of the MBH Assets company from 2002 to 2004 with a lawyer who figures in companies linked to members of the Jakšík organized crime group in Bratislava.

An Anton Rázga was also on the board of weapons company Magic Trading Corporation from 2003 to 2004. According to information obtained by The Slovak Spectator, Magic Trading applied for a license to ship an unspecified quantity of military material to Pakistan in 2001.