Castles in dire need of reconstruction

BRATISLAVA Castle's hosting of last year's summit between US President George W Bush and Russian president Vladimir Putin proved it is the only venue in the city regal enough for such a historic event. 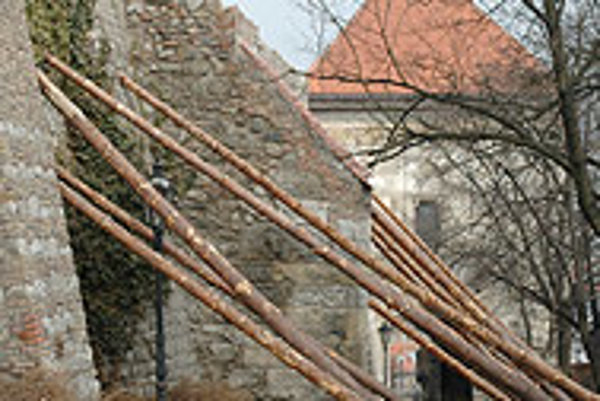 Font size:A-|A+  Comments disabled
BRATISLAVA Castle's hosting of last year's summit between US President George W Bush and Russian president Vladimir Putin proved it is the only venue in the city regal enough for such a historic event.

Nonetheless, the recon-struction this pride of the nation so desperately needs to maintain its stature has been delayed for five years now. In preparation for the summit, toilets got facelifts, some walls were re-painted and a few floors were smoothed, but this was far too small a patch for a historical edifice that actually requires Sk1 billion (€26.7 million) in repairs.

The castle suffers from a number of serious structural faults. Electricity, installed during the last massive reconstruction in the 1960s, is in a crisis state and faulty water mains are causing the walls to grow wet. The Sigismund's Gate is closed due to a suspected defect on the nearby fortification wall that remains upright only because it's supported by huge logs. Structural checks are planned for the spring to see whether the wall needs urgent attention.

"The castle's problems result from the fact that almost nothing has been repaired since the 1960s. Electricity and water mains, as well as the heating system, exceeded their lifespan a long time ago," said Miroslav Šarišský, the head of the communication department of the Slovak Parliament's Office.

Thoughts on renovation have been circulating since the mid-1980s. In 2001, the Slovak Parliament, which oversees the castle, finally drafted a restoration project that received approval from the Monuments Board.

Apart from a new technical infrastructure, the project calls for an architectonic redesign of the interior from past tastes into something more attune to the castle's historical spirit. Whole rooms will also be rebuilt to better serve as a representative and exhibition space to the public. The project was divided into three phases that should last a total of five years.

Despite the project's approval and the government's claims that the renovation is one of its priorities - Bratislava Castle will even be featured on Slovak euro coins that go into use in 2009 - the needed funds have not been allocated yet. Initial estimates were calculated at Sk837.5 million in 2001, but have since grown to the above-mentioned Sk1 billion.

"We realize that the reconstruction project poses more than just a small strain on the state budget, but the castle is one of the most important national monuments, as it serves an essential role as a host venue. Only look at our neighbours in Vienna, Budapest or Krakow to see how they keep comparable monuments in excellent condition," Šarišský said.

The validity of the construction permit for the castle's renovation has been extended until November 2007. Any delay past then would require new project plans and a new permit, which would mean increased costs and worsening conditions at the castle.

The castle regained its form during extensive reconstruction between 1955 and 1968 that began after a major fire in 1811. Since then, only three "big" building projects have been carried out. In 1988, a new exhibition entitled Jewels of Slovakia's Far Past required certain adjustments and repairs. Nine years later, the defective roof was replaced and recently, the reconstructed buildings on the western terrace began to serve as offices for parliamentary deputies and exhibition premises.

The parliament rents the better portion of the castle to two museums grouped under the umbrella of the Slovak National Museum: the Historical Museum and the Museum of Music.

The reconstruction projection is light at the end of the tunnel for the museum's timeless artefacts, but its constant postponement hangs over them like the sword of Damocles. It hampers their further development and sends a signal of neglect to the public.

Bratislava Castle is located on a strategically important hill that reaches 85 metres above the Danube. It has been occupied since the Stone Age and housed military, administrative and diplomatic groups that gradually built it into its current shape of an upside-down stool.

Traces of the Romanesque, Gothic, Renaissance and Baroque styles remain. The most recent significant changes took place during the castle's "golden age", the reign of Maria Theresa. That age ended, though, after Maria Theresa's son, Joseph II, ordered the kingdom's central offices moved to Budín (Buda).

The castle was turned into a barrack, which soldiers set ablaze in 1811, leaving only a shell of its external walls. This meant that, for the next almost 150 years, only ruins towered over Bratislava.

Next to Bratislava, one finds dozens of castles around the country that desperately need reconstruction. Trenčín Castle, with its crumbling fortification walls, is a glaring example.

The Zvolen Gothic Castle needs about Sk100 million (€2.7 million) in repairs. A former hunting chateau and fortress to repel Turkish invasions, it now serves as exhibition premises and a unique setting for social functions. Its administrator, the Slovak National Gallery, already has plans to rescue it.

"The gallery management has submitted the renovation project to the Culture Ministry," castle administrator Peter Heneš told the TASR news wire. "It was decided that we would apply to the fund of the Norwegian Kingdom for the necessary finances."

Heneš thinks that some parts of the historical monument will not survive without repairs for much longer. The roof, electrical wiring and gas mains, paving and plaster are in particularly bad condition. "About Sk40 million is needed only for new plaster," he said.

The National Gallery would prefer not to close the castle completely during the reconstruction because of the priceless treasures it houses and exhibits to the public, such as the Lapidary of Gothic Art and the Old Masters exhibition of paintings 16th-18th century paintings. Couples can also rent the castle's chapel or its 14th-century Gothic Knights' Hall for wedding ceremonies. In the summer, its courtyard is the venue for the annual Zvolen Castle Games drama festival.