The Beatles in folk return from Asia

FIFTY-five members of Lúčnica returned home from touring Macao and Taiwan on April 12. It was the third time the symbol of the country's traditional dance and music had reached Asian audiences. The last such trip took place seven years ago. 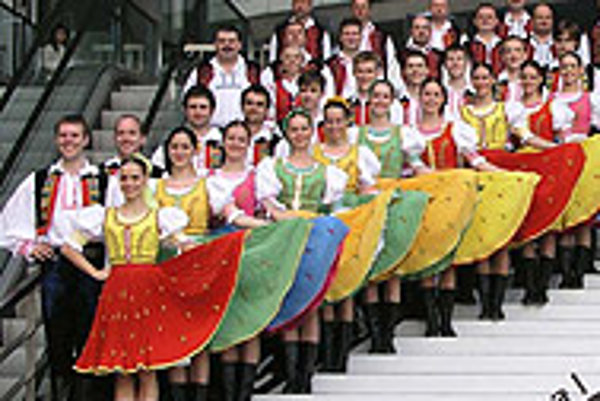 Font size:A-|A+  Comments disabled
FIFTY-five members of Lúčnica returned home from touring Macao and Taiwan on April 12. It was the third time the symbol of the country's traditional dance and music had reached Asian audiences. The last such trip took place seven years ago.

Based on the previous experience with the different cultures, Lúčnica knew that the Chinese applaud for a very short time even if they like the show a lot. They therefore rehearsed special short bowings. However, it came as surprise when the reaction was the same as the ensemble is used to at home.

"The last time we were [in the region] we often left the stage without bowing to the audience. There was not much to do within the 'one, two, three and cut' applause. But this time it was like in Europe, with our typical, large bows," said Martin Sleziak, the leader of the Golden Violin that accompanies Lúčnica, as he rushed out of the bus that carried the Lúčnica members from the airport to their club in the early morning of April 12 to munch on the traditional halušky meal.

He was soon joined by Lúčnica's choreographer Mikuláš Sivý, who added that they were a bit nervous at the start. With the ensemble's safeguarding its reputation of being "forever young" there were several newcomers to the stage. "But everything went great," he said.

The 40 dancers and seven musicians started their two-week Asian tour by closing the 17th Macao Arts Festival on April 1. The event is a prestigious international show from classical ballet to black theatre. Lúčnica sold out the Macao Cultural Centre several days ahead. It was right then, when they learnt the short bows they had prepared were of no use that the thrilled public asked for three bonuses at the end.

"The festival's director said that she had not seen such a success in years," Sleziak said, adding that it was a great honour for them that they chose Lúčnica, a folk ensemble, to highlight the festival.

After the show, around 30 Chinese stormed the backstage, all eager to take pictures and talk to Lúčnica, their "idols". It later came out that they belonged to an ensemble in Hong Kong that imitates Slovak folk dances. They put on the traditional Slovak costumes and dance for the audiences. The Detva dance was designed for them by Ervín Varga, the former assistant of Lúčnica's principal choreographer Štefan Nosáľ.

"We almost fainted when we saw them," Sleziak said. "We were like the Beatles to them."

The ensemble staged three performances in Macao and eight in Taiwan. The smallest hall was the size of the Lúčnica's frequent venue, the Bratislava's Istropolis that has 1,100 seats, and almost all venues were full. Between shows, the ensemble helped to promote Slovakia through the country's embassies in the region and performed workshops for schools. After they showed the kids Slovakia on map, they introduced each region through a short dance show, explaining the different costumes and instruments used.

According to Sivý, the Asian agencies work hard in importing culture from around the world to their countries and are especially efficient in promoting the foreign ensembles, as was the case with Lúčnica. The Chinese have learnt to go to theatres and each small town has a large theatre, most of them bigger than Slovakia's new National Theatre building, and excellently equipped.

The performers praised the great organisation of the tour. "The worst problem is always with costumes," Sivý said. A dancer wears eight or more costumes during a show and it takes an hour and half to pack them after each performance. "But once we pack them, they travel on their own by plane or in a truck going behind the bus," he explained.

The dancers, a majority of them university students, said they would not mind staying longer in the countries they toured. They climbed the world's highest building, Taipei 101, which was under construction when Lúčnica visited the country in 1999, and all had to learn eating with chopsticks. When they returned home, they all plunged into halušky, not because they found eating with chopsticks problematic but because it is the ensemble's tradition.

The tour was an exchange between what is seen as traditional by one and exotic by the other. "We were really pleased to see the Chinese audiences enjoy our shows the way people do here," said one of the dancers, Lenka Leváková.

Could it be that the beauty for which the Lúčnica female dancers are renowned played its role in the matter as well?

"The rumour of beautiful Slovak girls in Slovakia worked in reverse over there. Mostly girls were coming backstage, so our boys had greater success than we had," said Verona Gogálová.

"But when our petticoats showed under our skirts, the male audience roared as well," Leváková added with smile.

LÚČNICA will tour its homeland between May 13 and August 6, appearing in around 20 towns from Košice to Bratislava, as well as the Terchová and Podroháčske slávnosti folk festivals. Along the way, it also hopes to perform its Game and Wedding programme in Ostrava, Brno and Uherské Hradiště in the Czech Republic.

On May 1, over 30 Lúčnica singers will leave for a trip to Venezuela. The dance and music ensemble will spend July touring the USA and Canada and taking part in one of the world's most renowned folk festivals in Drummondville, Quebec. At the end of the year, the troupe plans to premiere a new show, the Slovak Trilogy.