Jurassic-era plant lives up to Flóra 2006

Wollemi Pine is over 200 million years old. Dating back to the time of the dinosaurs, it was long believed to be extinct until David Noble rediscovered it 12 years ago in the Australian Blue Mountains. 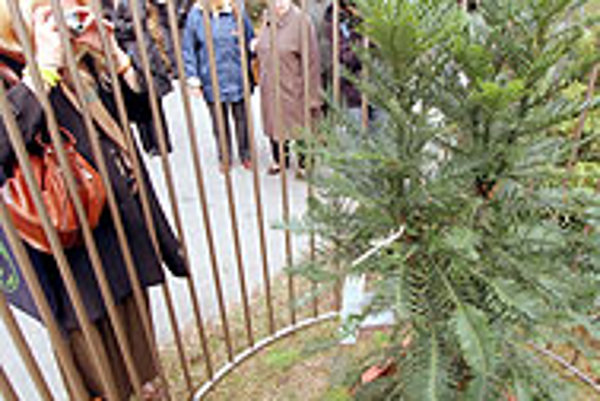 Font size:A-|A+  Comments disabled
Wollemi Pine is over 90 million years old. Dating back to the time of the dinosaurs, it was long believed to be extinct until David Noble rediscovered it 12 years ago in the Australian Blue Mountains.

The discovery created great excitement in the botanical world as it had only been known to botanists through its appearance in fossils. Since then the rare Wollemia nobilis (in Latin), named after the Wollemi National Park where around 100 trees were found and its discoverer, Noble, has made a long journey to reach Slovakia.

A 1.5-metre exemplar was planted in the Bratislava botanic garden on April 7 and other archetypes of this oldest fossil will highlight the annual international flower show Flóra Bratislava 2006 from April 26 to 30, in an exposition complete with print and visual information.

"Wollemi Pine is to be a traditional and a new inspiration at the same time," Katarína Kullová from the Kulla gardening family, which runs the show, told The Slovak Spectator.

"Traditionally, everyone wants to have a rarity in their gardens. The new aspect is that we expect to raise awareness towards plants and the effort to protect this unique example by growing it in various conditions."

The Wollemi Pine is said to grow up to 40 metres in the wild, with a trunk diameter reaching up to one metre. The bark of the tree is bubbly in appearance with a chocolate-brown colour.

However, the plant will not be for sale at Flóra Bratislava. According to Kullová, the sale has strict rules. There is a limited batch of seedlings planted from the strongest, certified originals scheduled for auctions and seedlings with diametrically different parameters entitled for public sale.

"A series of 10 pieces assigned for the Czech Republic, Hungary and Slovakia will be auctioned on April 27 at the fair and after the fair ends we should have the first information on when the official sale starts," Kullová said.

A metal cage guarding the Wollemi Pine tree in a pot in the Australian Royal Botanic Gardens was lifted on March 30, 2006 to symbolize the retail release of its seedlings into the public market across the world.

According to Kullová, people are greatly interested in buying the plant. In the case of the certified plants the sky is the limit in their prices, but one should also expect high prices with the "cheaper" generations designed for public sale, she says, as the revenues go to safeguard the Wollemi Pine survival.

"The plant has probably survived thanks to its undemanding behaviour," director of the Bratislava Botanic Garden Jaroslav Bella told the daily SME. "It can withstand temperatures from -10 degrees Celsius to +45 and it doesn't need much sun."

Among the flowers, plants, decorative trees, and artistically arranged bouquets on show, some of which will also be for sale, visitors can watch daily demonstrations of flower arrangements by Slovak as well as foreign professionals. The first day, April 26 will hold a contest in floristry (starting at 12:00) and in best exposition among the fair's participants (running throughout the day). The results will be announced at 19:00.