WHEN the opposition Christian Democratic Movement (KDH) introduced its mascot for June elections - a stork named Kristián - it was a clear sign that family would be a main campaign issue for the KDH. What wasn't clear at the time was the extent to which family issues would resonate across the political spectrum in 2006. 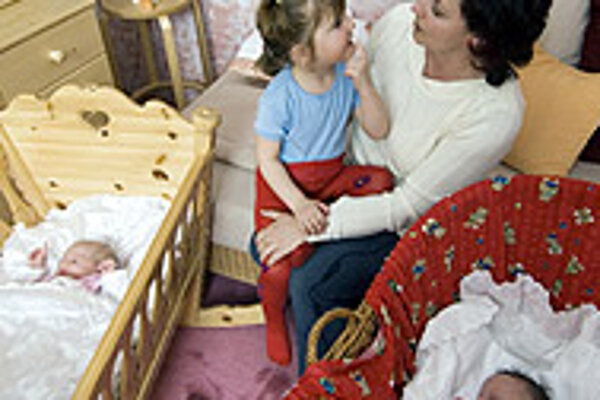 Font size:A-|A+  Comments disabled
WHEN the opposition Christian Democratic Movement (KDH) introduced its mascot for June elections - a stork named Kristián - it was a clear sign that family would be a main campaign issue for the KDH. What wasn't clear at the time was the extent to which family issues would resonate across the political spectrum in 2006.

"The stork has a strong family feeling, it establishes lifelong relationships, and the male and female jointly take care of their offspring," said KDH leader Pavol Hrušovský at the start of the election campaign.

Compared to campaigns in 1998 and 2002, which were fought on issues like democracy and Euro-Atlantic integration, this time around the conservative Christian Democrats are far from the only party trying to win the hearts of young families by promoting support for them.

It's about time, say sociologists.

"Practical support for young families, especially help with housing, has been much neglected over the last 15 years," sociologist Zuzana Kusá told The Slovak Spectator.

"Flats are financially out of reach for young people, even for those who work, and the trend towards leaving Slovakia for work abroad is growing. The housing burden is exceptionally heavy for our citizens, in comparison with citizens of other states, and the current state housing policy is unsustainable if we don't want the country to grow old and unpopulated."

Sociologist Pavel Haulík said that since the theme of family may concern anything from support for housing, to education and child allowance, it shows up in the programmes of almost every party running for parliament. The only question, he said, is "whether they can nail the theme in a way that appeals to people.

"It's definitely easier to score points on handouts for families, but when a party chooses to support issues that are not generally viewed as problematic, such as the Internet, at a time when families need money for more prosaic things, it can also have a boomerang effect."

Naturally, the theme of family is especially strong in the election programmes of the Christian-based parties - the KDH and the ruling Slovak Democratic and Christian Union (SDKÚ).

But while the Christian Democrats support exclusively the first marriages closed specifically between men and women, the election posters of Dzurinda's SDKÚ guarantee "equal chances for each family". The opposition Free Forum (SF) also stresses help for incomplete or untraditional families.

The "help" that is promised by these parties is to be delivered in the form of building community housing, subsidizing the interest rates on mortgage loans, increasing birth handouts, and improving the coordination of childcare with work. Families with lower incomes are to receive more support, while fathers are to be brought more into family roles.

According to a poll by the MVK agency for the SME daily, 25 percent of respondents think that social support is the most important issue in any political program. Those most focused on social support, almost 38 percent, are the voters of the SF; according to sociologist Pavel Haulík, the party's voters identify with its agenda.

Many other parties are also aware of the family-oriented mood of the electorate, some extremely so. The non-parliamentary Slovak National Party (SNS) wants the state to provide young families with their own flats by the time their children reach their first birthday.

Poštová banka analyst Miroslav Šmál calculated for the Hospodárske noviny daily that if each flat cost Sk1.5 million to build, at the estimated number of 55,000 babies born this year, the SNS plan would come with a Sk80 billion (€2 billion) price tag.

"It's a nice thought, but it's financially impossible," Šmál told the daily. SNS leader Ján Slota said he wanted to raise the money through "the cancellation of the ministry of culture or construction," news wire TASR reported.

Kusá said that the long-term neglect of housing support in Slovakia was undoubtedly behind the steep decrease in both the marriage and birth rates.

For that reason, many parties take an "Adam and Eve" approach to family policy, meaning help for young families in the form of state handouts not only for establishing families but also for having babies.

"We want to change the legislation to halt the unfavourable demographic trend in Slovakia by motivating young people and families to have babies and raise them," said SNS spokesperson Rafael Rafaj.

After years of decline, Slovakia has seen a rise in newborns over the last two years. In 2005 almost 1,000 more children were born than in 2004. The state paid around Sk233 million in handouts for the newborns, a Sk24 million increase from 2004.

The nationalist party along with the opposition Movement for a Democratic Slovakia (HZDS), the KDH and the opposition Smer want to increase the one-time contribution at the birth of each child. The HZDS suggests a fourfold increase to Sk20,000, which would almost match what Czechs receive when a baby is born.

The politicians nevertheless take their family policy a step further.

Almost all call for family life and work to be synchronized. By supporting daily childcare and involving men more in family life, as well as improving conditions for working mothers and creating more flexible forms of employment, parties want to combine social support and wages to provide sufficient income for families.

"It's better both for society and for individuals when they work and create value rather that having the state pay for them to be inactive," said Martin Maťko of the SDKÚ.

The SDKÚ wants to introduce a system of family accounts to direct state support, from which a family could draw money according to its life situation. If families did not use the money when their children were young, they could put it towards their children's education or independence.

The Hungarian Coalition Party (SMK) also proposes introducing "children's bonds" that would guarantee the child state support of Sk10-15,000 and serve as a signal for parents that "establishing a family is not just a private matter".

Parties also have recipes for taking care of neglected children. While the SNS wants kids to grow up in complete families, the SMK supports building newborn centres to reduce the newborn mortality rate.

The SF wants to treat raising a family as "equal work comparable with a full-time job", and advocates that a functioning family should be one of the criteria used by employers when evaluating employees in the future.

The KDH, which has perhaps the boldest family policy, wants to alter the constitution to protect the institution of marriage. Its primarily goal is to protect the definition of marriage as a "relationship between one man and one woman" and to shield it from "interventions by international organisations who want to make it equal with other forms of non-marital coexistence".

The party wants to increase the tax bonus for multi-child families by 100 percent to Sk1,100 a month for the period of six months from birth. It also supports a principle of "the longer the marriage, the lower the taxes", and proposes a tax holiday for newlyweds, when in the year of marriage each spouse can deduct Sk100,000 from their tax base. The KDH calls for fathers to be given a week of paternity leave after a child is born, and Sk10,000 a year for the first five years to help the newly married couple to pay their mortgages.

"Election promises are simplified. After elections various conditions and limitations will be introduced. Still, I am persuaded that the housing problem should remain the theme of this election campaign without being denounced as cheap populism," Kusá said.