Parties wary of tuition fees ahead of elections

ALTHOUGH right-wing parties have tried to push through tuition fees for university education several times this election term, even they have relaxed their goals ahead of the upcoming general elections. 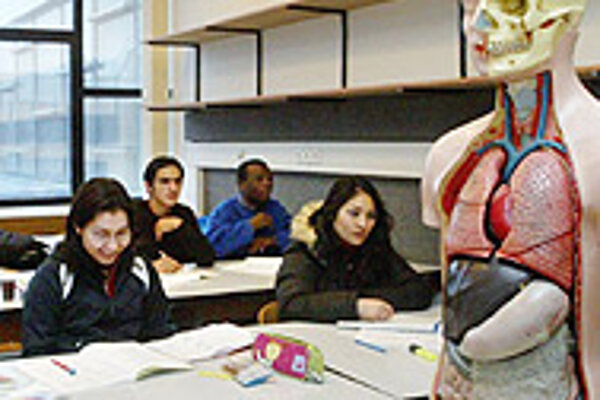 Font size:A-|A+  Comments disabled
ALTHOUGH right-wing parties have tried to push through tuition fees for university education several times this election term, even they have relaxed their goals ahead of the upcoming general elections.

However, education receives great attention in party programmes with plenty of ideas for improving the state of the country's education sector.

The major political parties expected to make it into parliament after the June 17 elections share the priority of education along with better conditions for students and teachers.

Prime Minister Mikuláš Dzurinda's ruling Slovak Democratic and Christian Union (SDKÚ) has a broad agenda regarding education and human resources under the umbrella of its knowledge-based-economy programme.

Other parties, such as the Christian Democratic Movement (KDH), also describe education, including university education, as a major value that is the "basis of [national] prosperity, development and cultural values of society."

Yet all parties except for the SDKÚ reject the introduction of tuition fees for university education, even though former Education Minister Martin Fronc (KDH) in the current government tried to push through fees several times in parliament.

Currently only the SDKÚ says that fees for university education could be considered, couching even this admission as a "possibility but not a duty" to charge the fees.

The SDKÚ's May 1 election programme states that the party has been a long term supporter of the idea that universities should be allowed to "demand a part of their expenditures from students".

"Students would have the chance to gain a guaranteed loan with low interest for expenditures connected with education, which would only be payable if graduates have sufficient income," states the SDKÚ programme regarding education.

The SDKÚ says it would be the best if universities had the possibility rather than duty of charging these fees. The party also says that it would consider introducing the fees for just the second part of university education, which would apply to the last four semesters of university programs. In case of bachelor degrees, which usually last three years, the SDKÚ would consider introducing tuition fees for external students.

Like other parties, the SDKÚ maintains that the education sector needs more money.

"We will therefore adjust the system of financing on all levels of education with greater impetus on quality and less on the quantity of schools," states the SDKÚ.

Unlike Dzurinda's party, the SDKÚ's ruling partners are not so eager about tuition fees, although they also admit that more money has to go into education.

"In the coming election term the Hungarian Coalition Party (SMK) does not think it is a priority to introduce tuition fees in universities," Lívia Solymos said to The Slovak Spectator on May 3.

However, her party is convinced that Slovakia must create a new, modern law on education and increase funding for the sector so that it reaches 5 percent of GDP at the end of the election term in 2010. Currently the education sector receives around Sk50 billion per year from the state, which is around 3 percent of GDP.

The SMK also wants to carry out an "extensive reform of [educational] content," introduce more effective foreign-language and IT instruction, and institutionalize the continuing education of teachers.

Regarding university education in its election programme, the conservative KDH wants to push through "...improved and increased financing focusing on effectiveness, the support of financing of universities on the basis of quality of provided programs, as well as the financial support of poorer students and students who achieve great study results."

The Free Forum (SF), which was formed largely by SDKÚ breakaways in 2003, agrees that the education needs increased funds.

According to the SF "...the internal debt of universities, which stems from their insufficient material and technical equipment, also needs to be eliminated."

"Secondary schools produce an alarmingly high percentage of unemployed graduates. The number of freshly graduated unemployed reaches as much as 25-30 percent," states the SF.

The opposition Movement for a Democratic Slovakia (HZDS) also is against tuition fees in the current social situation in Slovakia.

"If we consider the current social situation of families, partial or complete fees for university education in Slovakia would represent a social barrier to many people in accessing university education," Magdaléna Fajtová, the HZDS spokeswoman, said to The Slovak Spectator.

She added that among her party's main goals in education is "...securing the quality of the schooling process...while we will secure a free choice between state financed and private schools."

"We will continue free university education and will support new motivational and social stipend programmes", she added.

"We support the principle of individualization and differentiation of education, the support of disadvantaged individuals and the care and development of talented pupils, which foresees decreasing the number of pupils per class and increasing the financial normative [a lump sum paid by the state to each school per pupil, ed. note]," said Fajtová.

The left-wing Smer and non-parliamentary Slovak National Party (SNS), which is also likely to make it into parliament, also are against tuition fees.

The SNS backs the idea of "free education" and also lists a number of steps that it plans to implement if in government, including the equality of all elementary schools in terms of financial support from the state as well as the preparation of the content of the curriculum that would "reflect an education towards national pride, Christian roots, Slovak identity, and national culture."

Like other parties, the SNS also says the social and economic situation of teachers should be improved to reflect the importance of these people for society. Similarly, university teachers and scientists should receive greater financial remuneration and investments into the sector as such.