THE SLOVAK Spectator (TSS): There appears to be virtual unanimity among Slovak political parties that flat taxes, or at least low taxes, are a good idea. Does the consensus surprise you? 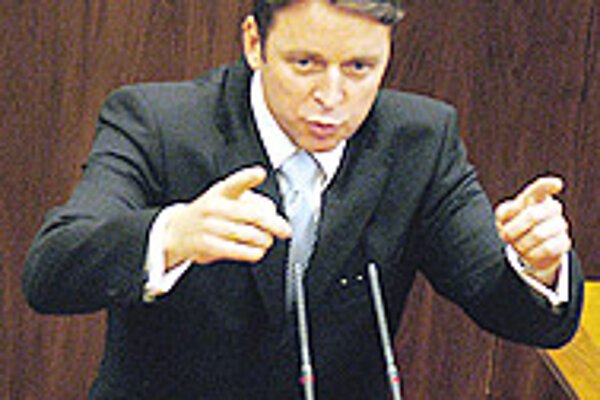 Font size:A-|A+  Comments disabled
THE SLOVAK Spectator (TSS): There appears to be virtual unanimity among Slovak political parties that flat taxes, or at least low taxes, are a good idea. Does the consensus surprise you?

Ivan Mikloš (IM): No. Tax reform has produced such unequivocally good results, in terms of the performance of the economy, the business environment, tax revenues and the image of the country abroad that it doesn't surprise me. The changes have been in place for two years, and they were obviously good ones.

TSS: You mentioned that it might be possible to cut taxes by one percent a year until 2009. Do you think that would create tensions between Slovakia and the EU, given recent calls in the Union for a unitary tax policy?

IM: This proposal is not in conflict with any EU rules or directives. While the criticism may increase or even intensify, it is political criticism, political statements. When we talk about it at ECOFIN {Economic and Financial Council of the EU, which meets once a month, ed. note], no one says a word about it to me. Not only is it not against EU rules, it is actually in keeping with what EU leaders agree in theory has to be done.

I think that any tensions that have come up so far have been a result of the insufficient dynamism and failure to reform of some member countries, their inability to put into practice what everyone agrees in theory needs to be done - structural reforms, flexible markets, a single EU market. The problem is that when it comes to actually doing anything in these areas that carries the slightest degree of political risk, the will suddenly disappears.

TSS: We have recently seen a number of large tourism projects announced - the Sk50-60 billion Slovakia Ski Region investment, the Sk2.5 billion Aqua Park Poprad water park, the Sk6.5 billion recreation park in Slovenský raj by the Dorchester Group of the UK. Is it time for the government to look again at its investment support programme to support the tourism sector as well?

IM: I agree that there is enormous unused potential [in support for tourism]. One of the main things that has to be done is to get rid of barriers, rather than provide incentives. Today we have many legislative, bureaucratic and administrative barriers in terms of environmental law, the registration and ownership of land, construction permits and so on.

We also want to found a Ministry of Regional Development and Tourism as an important government agenda, and to do a detailed audit of the barriers to the development of tourism.

TSS: Your SDKÚ party promised in 2002 to reduce the size of the bureaucracy, but the numbers are much the same today as then. Why haven't you cut staff in the civil service, and what do you intend to do about it if you get back into office?

IM: There remains great over-employment in the state sector, and there are a number of ways to deal with it. At the central level we propose getting rid of two members of cabinet, and abolishing five central state organizations. We also propose to do a running audit of the business environment to continually get rid of needless red tape, regulation, fees, statistics and so on. We also want to do an audit of different ministries and state agencies to see if we can reduce numbers, just like we did at the Finance Ministry, where we cut staff by 30 percent and actually improved the performance of the ministry.

TSS: You have said you would be interested in taking over the Ministry of Education in the next election term, in order to direct the building of a knowledge-based economy in Slovakia. What changes would you make to the school system?

IM: The knowledge-based economy is a key part of our programme, and is important for long-term sustainable economic growth, higher employment and a higher standard of living. Above all we want to dramatically increase the quality of the education system at all levels, but especially at the university level, where the problems and deficiencies in terms of quality are greater.

We intend to do this by changing the financing system, which is today based on quantity, with schools receiving funding according to the number of students they have. We want to reform the elementary and secondary school curricula and differentiate universities according to quality into three levels, and finance them differently according to their quality - in other words, create some motivational mechanisms.

We want to put more money overall into the education system but to tie it to mechanisms that will increase quality, so we can be sure the added finances bring added effects.

TSS: We have an interview with Eximbanka CEO Ladislav Vaškovič in this issue in which he says that Slovakia's labour force is not as attractive to investors as it thinks it is, particularly in terms of education and language skills. Is he right?

IM: I believe he is, and that's precisely why we came up with our Minerva programme to build a knowledge-based economy. But there are a whole range of other problems. I was just on the campaign trail in Snina [in Eastern Slovakia], one of the most backward regions of the country, at a new factory employing 100 people making farm machinery and presses. The factory owners said they were having problems finding employees, even though employment was high. There are simply not enough high-quality, educated and experienced machine operators who know how to operate modern machines, because at Slovak trade schools they are still being trained on machines from the 1950s. We will have to make a great effort to use Euro-funds to modernize technology and teaching aids in schools, both in academic secondary schools and trade schools.

TSS: What do you regard as the top achievements of the Finance Ministry over the last four years?

IM: I guess tax reform, which I don't need to go over again, and then the reform of public finances, not just reducing the deficit but also putting public finances in order, moving to the ESA 95 methodology, and bringing all the hidden debts and expenditures into the light. We created a State Treasury and a Debt and Liquidity Management Agency - basically we cleaned house. We moved to programme budgeting over three-year terms.

The third reform, which I believe never got the credit it deserved, was fiscal decentralization, which set rules for financing municipalities and towns and regional governments. Finally, I would also mention the audit and internal reform of the ministry, as a result of which we gained the European Foundation for Quality Management certificate, as the first ministry anywhere in Europe. This is a form of insurance. If the next finance minister reduced the quality of management at the ministry, he would lose the certificate, which increases the likelihood of continuity at the ministry.

TSS: Documents have recently been leaked from Slovakia's intelligence services suggesting that they are involved in criminal activities. How much has Slovakia done to clean up corruption over the past four years, and how much remains to be done?

IM: I think there has been substantial progress, and the recent EBRD report said that Slovakia had made the most progress of any country in the last four years in reducing corruption. This progress is largely a side-product of systemic reforms, such as bank privatization. Eight years ago banks were the largest source of corruption, today no one would even suspect banks of being corrupt.

There is lots of room for improvement, obviously, but that can be achieved by continuing with reforms to reduce the state role in the economy and to increase competition.

The introduction of e-government is another means to reduce corruption, allowing electronic procurement and so on. E-government would also introduce universal standards for information systems. One of the greatest sources of corruption over the last 15 years, and in fact the basis of the 'skupinka' (little group) affair [in 2003 which cost the government its parliamentary majority], was the information business because of the fact that great sums of money are involved and because it is an expert field that bureaucrats don't understand, giving those who offer the services an information advantage. There were no general rules, and no one to prevent the purchase of pointless or duplicate systems that can't communicate with each other.

TSS: A recent Transparency International survey showed that while overall corruption was falling in Slovakia, it was actually becoming more concentrated in politics. Is that due to people's generally low opinion of politicians, or does it reflect the reality?

IM: A bit of both, I think. It is due to the fact that influence, money, power and public procurement are concentrated in politics and the public sector. The smaller the public sector and the more clear the rules, the less the room for corruption.

It's no coincidence that people see as most corrupt precisely those sectors which have been touched by reform the least that until recently included health care and still includes education, where you have the added problem of scarce supply, encouraging people to offer bribes.

TSS: From a spectator's standpoint, the June 17 elections would seem to be a run-off between the opposition leftist Smer on the one hand, and the three former right-wing government partners on the other hand, with both groupings likely to score around 25-30 percent and swing parties, like the opposition HZDS, SF and SNS, deciding who to go with and form a government. Is this the way it looks from an insider's perspective?

IM: I think you described it fairly accurately. The most important things will be for the three right-wing parties to gain more than Smer and be able to cooperate. The main theme of these elections will be continuity versus discontinuity. Discontinuity means scrapping reforms and wasting the changes that Slovakia has today. Continuity means completing reforms and building a knowledge-based economy, which would lead to very dynamic growth.

TSS: The SDKÚ has been attacking Smer on two fronts - the fact it lacks professional talent to run the country and its apparent financing ties to former Mečiar-era privatisers such as Vladimír Poór, Juraj Široký and so on. Is this campaign having an impact on voters?

IM: We'll see. Every election in Slovakia so far has differed substantially from pre-election poll results.

TSS: How do you think the SDKÚ's election result will compare to its current poll figures?

IM: It will be higher.