Tea at five back on scene

THE DAYS of opulent 19th century-Viennese dances, resounding with waltzes by Johann Strauss, are long gone. 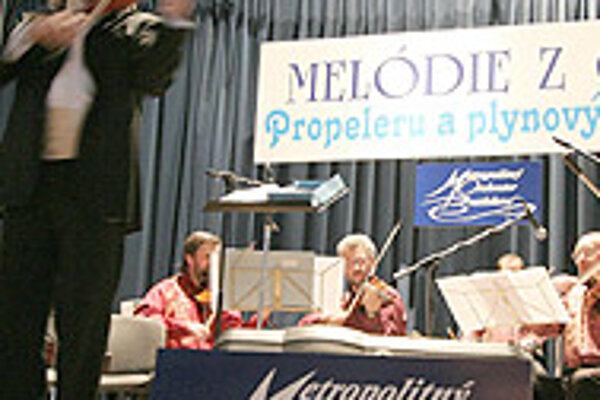 To a certain extent, though, they remained in Bratislava throughout the last century at events known as Tea at Five, where Bratislavans could dance to live music that ranged in genre from The Waltz King to Gejza Dusík, and even Latino.

After years of silence, Bratislavans now have their favourite dance afternoons back, as the Metropolitan Orchestra Bratislava, in cooperation with the Bratislava Culture and Information Centre, restored the tradition on April 23.

"When we were young, Tea at Five was very popular. But they perished and those who attended dance lessons suddenly had no place to practice," said Roman Pálka, who plays cello in the orchestra, and, at 47, remembers the Teas at Five well.

On April 23, the orchestra played a varied mix of popular salon melodies, including waltzes, polkas and tangos. The girl dance group Badula kept visitors on their feet, including European Union commissioner Ján Figeľ and his wife, who highly praised the organizers' attempt to return the spirit back to town.

According to organisers, the satisfaction and long applause from the dance crowd proved the city had missed the event. Though mainly older generations came, younger visitors, who had heard of the event from their parents, seemed to have good time too.

"There was no need to call people onto the dance floor," Pálka said.

The Metropolitan Orchestra Bratislava is comprised of 23 professional musicians, such as tenor Ján Babjak and sopranos Mária Eliášová and Eva Šeniglová, who are members of significant Slovak music ensembles, including the Slovak Philharmonic, Slovak Radio Symphonic Orchestra and the orchestra of the Slovak National Theatre.

It was founded to revive the operetta and waltz tradition in Bratislava, which is one of the main metropolises in the region to have originated the great works of Strauss, Kálmán, Lehár and Dusík.

"This music is historically part of the town and, by cancelling the singspiel tradition of the Nová Scéna theatre, operetta has practically become extinct in Slovakia," Pálka said.

The downfall of the operetta was the impetus the musicians needed to found the orchestra, which at its birth, also remembered the Teas at Five.

The next Tea at Five will start at 17:00 on Sunday, May 28, at the Bratislava's Park of Culture and Leisure (PKO).

Though the venue's future is uncertain, organisers will hopefully make the event continue, promising to serve tea along with the dancing, as the title Tea at Five suggests.