LOOKING younger than her 25 years, German violinist Sophia Jaffé, dressed in a long princess-style dress, won the Music Critics' Prize as well as the Viewer's Prize at the Central European Music Festival in Žilina. For the 16th time, the young classical music talents from the region gathered to compete in the north-Slovak town. 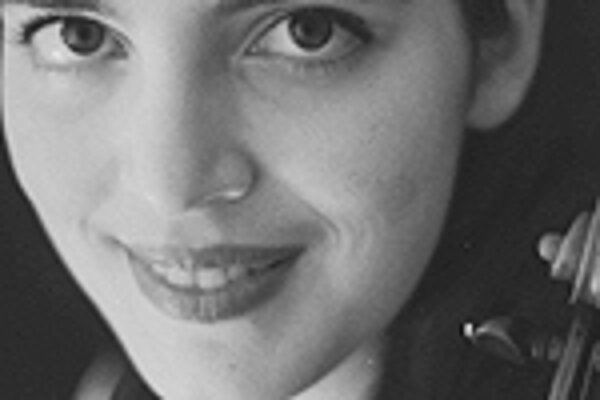 Font size:A-|A+  Comments disabled
LOOKING younger than her 25 years, German violinist Sophia Jaffé, dressed in a long princess-style dress, won the Music Critics' Prize as well as the Viewer's Prize at the Central European Music Festival in Žilina. For the 16th time, the young classical music talents from the region gathered to compete in the north-Slovak town.

"I am surprised and honoured," Jaffé told The Slovak Spectator after receiving the prize. "I tried to enjoy the music I played and I didn't think about the competition."

The violinist performed on stage with another competitor, Slovak conductor Juraj Valčuha, who led the Janáček Philharmonic Ostrava from the Czech Republic. They closed the event on April 29 with Aram Khachaturyan's grandiose Concerto for Violin and Orchestra, which drew standing ovations from the public. Jaffé added two encores, Eugene Ysaye's L'Aurore and Johan Sebastian Bach's Largo, which added to the audience's thrill.

"It's seldom that an audience is so warm. Somehow, this heartfelt reaction came as a surprise," said Jaffé as she was congratulated by the exiting crowd and fellow musicians.

The musician played her favourite Khachaturyan concerto for the first time. She selected and specifically learnt the work for this concert. It was also the first time she performed with a Czech orchestra, which she enjoyed a lot. "They are very friendly people."

Born within a family of violinists, including her sister, Jaffé received her first violin at the age of 5. She is a student of Herman Krebbers in Amsterdam, the Netherlands, and in 1998 she enrolled to study music in Stephan Picard's class at the prestigious Hanns Eisler Music School in Berlin, Germany, earning her diploma in 2003. She has performed with the Beethoven Orchestra, Bonn, Sinfonietta Cologne, Radio Orchestra of Bavaria, Johannesburg Symphony Orchestra, National Orchestra of Belgium and many others.

Winning the German Music Competition in Berlin and the third prize at the Queen Elisabeth International Music Competition in Brussels in 2005 earned her a ticket to the Žilina competition, which, next to the Bratislava Music Festival and Melos Ethos, is the most representative event of classical music in Slovakia with the focus on young talents.

The critics' prize also entitles Jaffé to perform next year at the festival.

Next in importance is the prize given by the Association of Slovak Concert Artists, co-organiser of the event, which this year went to Hungarian organ player László Fassang and the Prague Spring Prize, which assures a musician attendance at the prestigious Czech event, went to Slovak bass Štefan Kocán.

"The festival is a good example of how music can enrich our lives, bring together people of various cultures and promote idea of mutual understanding," said Slovak EU Commissioner Ján Figeľ, under which auspices the festival is held.

The festival each year guarantees good music for the listeners and help in launching the careers of the participating musicians. The programme reflects the repertoires of the young musicians as well as pays attention to decisive musical events and new works. The 16th year was dedicated to the Year of Slovak Music and Mozart's Year, and Bratislava Cappella Istropolita premiered Peter Zagar's Michalova Madona.