DINOSAURS reigned at this year's international flower fair, Flóra Bratislava 2006. The life-sized giants wandered out of the nearby Dino Park to guard Wollemi Pine, a precious plant from Jurassic times that was recently discovered in Australia and is now being introduced to the world. 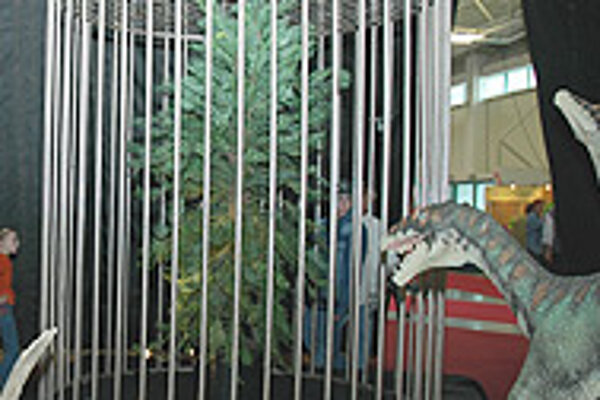 DINOSAURS reigned at this year's international flower fair, Flóra Bratislava 2006. The life-sized giants wandered out of the nearby Dino Park to guard Wollemi Pine, a precious plant from Jurassic times that was recently discovered in Australia and is now being introduced to the world.

The area where the pine was found in 1994 is now included on the UNESCO Heritage List and the plant has been entered into the red book of the most endangered plant species.

The entire world has joined in preserving Wollemi Pine for future generations. To generate money for its rescue

and to prevent people from visiting the tree in its habitat, as any disease or virus could kill it, the tree is being reproduced and sold through auctions and specialized public sales around the world.

The first public auction in Europe took place during Bratislava's Flóra fair on April 27, where four of the six Wollemi Pines up for sale found new owners.

"We are more than satisfied with the results," said Norbert Zaťko from Engo, a Trnava-based coordinator of Wollemi Pine sale in Hungary, the Czech Republic and Slovakia, which co-organised the Flóra sale with Bratislava's Soga auction house.

Though the buyers wanted to stay anonymous, Zaťko confirmed that one of the trees went to St. Anton Museum near Banská Štiavnica. Another Wollemi Pine, one that was not part of the Flóra sale, is growing in Bratislava's Botanic Garden. The decision on the two unsold trees has not been made, but they will probably see similar

auctions in the Czech Republic or Hungary.

Altogether, Europe received 59 large trees for sale, seven- to eight-year-old descendants of the trees living in the Australian canyon, the first planted outside the locality.

Several other smaller and less expensive Wollemi Pines were on sale during the event as well. Only two were sold, which according to Zaťko points to the fact that people find it hard to believe they can buy the plant.

On May 1, the Engo firm and Bratislava's Botanic Garden launched a commercial sale of the plant.

Apart from the dinosaurs and the rumbling sound that brought the Flóra's visitors 200 million years back in time, the event was a usual up-to-date colourful exhibit of flowers and gardening tools.

Altogether 172 exhibitors from Slovakia, the Netherlands, Germany, Hungary, the Czech Republic, Poland and France covered 11,000 square metres with their bouquets and flower arrangements as well as pools and landscaping and design exhibits.

Among garden accessories, a large woman woven from wicker, a boot, and interestingly formed fences by Július Lalák generated a lot of interest. Lalák, who comes from a tiny village near Nové Zámky, Nesvady, switched to the unusual business after the demand for wooden ladders, which he used to make, dropped.

"First I created a wicker wall and bent it," he explains his start two years ago. Today his wave-like wicker fences, roofs, hats and figures can be found in gardens around the country.

Photos by Jana Liptáková and
text by Zuzana Habšudová