POLITICAL parties admit that young voters are becoming a target of their election campaigning ahead of the general elections. 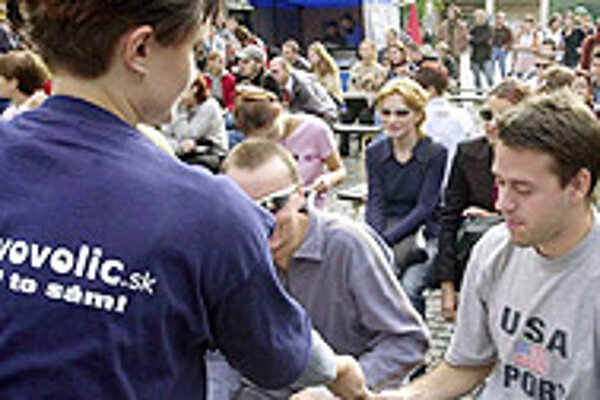 Font size:A-|A+  Comments disabled
POLITICAL parties admit that young voters are becoming a target of their election campaigning ahead of the general elections.

In an effort to catch the attention of first-time voters, politicians are travelling to meetings around Slovakia and visiting secondary schools as well as universities in an effort to win what most believe to be the "least reliable" voter group - those aged 18 to 21.

According to Statistics Bureau data, there are 345,600 voters aged between 18 and 21 in Slovakia, amounting to about eight percent of the total pool of around 4.1 million voters.

Convincing the young voter is a tough job, say political analysts. Given the general fatigue with politics in Slovakia, young people in this country are even more disaffected than is normal, and cannot be counted on to turn out at the polling stations on June 17.

Just recently, Prime Minister Mikuláš Dzurinda, the leader of the Slovak Democratic and Christian Union (SDKÚ) party, met students from the Technical University in Košice and the academic secondary school in Gelnica.

Nor are other parties avoiding the school arena. The opposition Movement for a Democratic Slovakia (HZDS) says it is interested in communicating with young voters, as do other parties.

The opposition Smer and its leader, Robert Fico, the Christian Democratic Movement's Vladimír Palko, and Zuzana Martináková, the chairwoman of the opposition Free Forum (SF), have also been meeting with younger voters recently.

Many political parties in Slovakia also have their own special youth organizations to work with young people.

They admit, however, that working with young people is a hard job.

"It is hard. We experienced this for the first time ahead of the November 2005 elections to the higher territorial units (VÚCs). Young people are not interested in politics, let alone political work. We mainly focus on trying to mobilize them to turn out in elections," Péter Nagy, the head of the youth organization of the ruling Hungarian Coalition Party (SMK), told The Slovak Spectator.

The fact that the SMK, which is among those parties that are generally known for lacking a greater link to young voters, established its youth organization in the middle of last year proves that political parties are realising the need to "raise the new generation, even for possible political work later on," Nagy said.

In the last general elections in autumn 2002, youth voters also signalled greater support for Smer and the self-proclaimed liberal New Citizen's Alliance. Yet this voting segment has proven its great riskiness, according to analysts. Although they may favour a certain party, they are less likely to turn out at the polling stations.

"The main feature of this group is that there are many undecided voters and non-voters. This also will probably be reflected in the June 17 elections," Gyárfášová said.

However, according to another sociologist, Pavel Haulík of the MVK agency, the situation is no more dramatic than in other states.

"This feature is probably not specific to Slovakia. Roughly estimated, perhaps half of young voters may not turn out at the elections, which is not really catastrophic," Haulík told The Slovak Spectator on May 9.

He would not guess, however, how many young people would turn out this June.

With the complicated and often rebellious nature of youths, few are willing to hazard a guess as to whom youths will choose as their election favourites if they decide to go to the polling stations.

"We lack specific research focusing on young voters. Yet it can be said that once they decide to go to the polls, they are mainly influenced by their closest surroundings, i.e., family, friends, and so on, as to who they vote for," said Haulík.

According to the IVO's findings, many young voters often belong to the "undecided" group.

Politicians who have admitted that young people are an interesting group for them say that they mostly try to convince them to go to the polls in the first place.

"We need to know what the students think," said HZDS Vice Chairman Milan Urbáni in a recent political discussion show broadcast on the TA3 news channel. Meanwhile, the SDKÚ's Stanislav Janiš admitted that his party was campaigning at schools for the student vote.

According to HZDS spokeswoman Magdaléna Fajtová, her party aims to reach out to all citizens in Slovakia "regardless of age or other differences".

"Within the pre-election tours, HZDS Chairman Vladimír Mečiar, as well as other party officials, goes to various events at which youths are also participating, and they also take part in many meetings and discussions with first-time voters and secondary school and university students," Fajtová told The Slovak Spectator.

"Travelling to voters, meeting them in person, and having discussions with the citizens are priorities in the HZDS election campaign for the upcoming elections. During the meetings with young people, their reactions to the HZDS programme as well as the party as such are excellent," she said.

"We also work on the expert level. Last year, for example, we helped prepare laws that relate directly to young people, such as the university law, which was then approved by the government," said the SMK's Nagy.