Florian gets his fiery day

FIREFIGHTERS across the country celebrated the day of Florian, the patron saint of firefighting, on May 4. On this day each year, professional as well as voluntary firefighters traditionally prepare various attractions for the public and competitions among themselves, as well as live music. 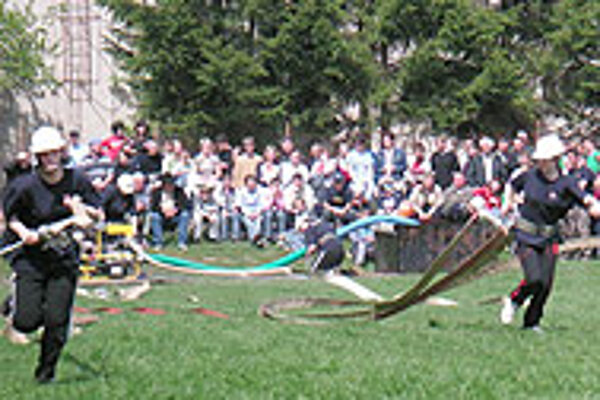 Font size:A-|A+0
FIREFIGHTERS across the country celebrated the day of Florian, the patron saint of firefighting, on May 4. On this day each year, professional as well as voluntary firefighters traditionally prepare various attractions for the public and competitions among themselves, as well as live music.

Apart from finding out more about their work, the public also learnt that the number of voluntary firefighters, who are active in almost every municipality, is shrinking.

"Over the last years we have registered a slight decline in our members, which was caused by the closure of several companies that included voluntary fire brigades. Another cause in the drop is the demographic trend, which is not specific only for our country," said Vendelín Horváth, general secretary of Slovakia's Voluntary Fire Protection.

By the end of 2005, the institution registered around 95,000 members grouped in almost 3,000 fire brigades around the country.

The situation is most alarming in villages. Egon Grossman, who chairs the regional committee of the voluntary fire brigade in Považská Bystrica, said that the members in the municipal fire brigades are mostly older, and young members are difficult to attract as they generally work outside the village.

"The situation is not rosy," said the voluntary firefighter, who attended the St Florian event in Považská Teplá. Voluntary brigades from seven nearby municipalities competed to see which company could set up fire hoses the fastest, while professional firefighters extin-guished burning cars to the amazement of the gathered crowd.

Grossman has been doing the job for over 40 years and says that to become a voluntary firefighter is enormously hard work. "One needs to donate his or her enthusiasm to the society."

Many also see insufficient financing as a problem. The state annually supports voluntary firefighers with around Sk18 million (€480,000). The voluntary fire brigades mostly work as municipal fire brigades, so they are largely dependent on the generosity of the municipality's budget.

The current legislation states that municipal fire brigades do not have to exist in villages of less than 500 inhabitants, or when the village agrees with the professional firefighting department to cover the necessary tasks.

"We've noticed the mayors of municipalities under 500 citizens cancelling the municipal firefighting brigades in order to save money. However, with the next fire in their territory they find out that the professional firefighters cannot arrive in time to put out the fire before it spreads," Horváth said.

To help the towns preserve and strengthen their firefighting brigades, Slovakia's Voluntary Fire Protection plans to initiate a law on voluntary protection in 2007. It will oblige employers to release voluntary firefighters during an action or training. The volunteers also ask for an increase from Sk18 million to Sk30 million from the state budget.

The difference between the work of voluntary and professional firefighters is mainly in the techniques they use. The volunteers often work with equipment that is over 30 years old, Horváth explains, which cannot be used in special missions, such as elimination of hazardous materials. "In many cases voluntary firefighters do not even have the personal protection gear that's needed at such actions."

Nevertheless, Horváth says, they can effectively help in extinguishing fires and during natural catastrophes, such as snowstorms, floods and windstorms. This year they mainly helped during the winter snowstorms and the recent floods. They also teach how to prevent disasters.

In the Považská Bystrica region, Grossman adds, they mostly help out at car accidents and accidental fires in family houses, which are especially numerous in the winter, as many people burn wood and do not pay enough attention to it. "Now, in the spring, it's about grass and wood fires, and we also try to teach smokers not to toss away lit cigarette butts."

With parliamentary elections knocking at the door, Ivan Šimko's Misia 21 is the only party that proposes legislation concerning firefighters.

"We believe that society cannot get by without the voluntary activities of its citizens on behalf of others," Šimko told The Slovak Spectator. "As an interior minister, I often met with voluntary firefighters. I know their work and courage and I appreciate it a lot. These people often risk their lives voluntarily, knowing that as people we have to help each other. This is a great thing that such solidarity really works in practice."

Missia 21 invited a long-time volunteer of the Prešov fire-brigade, Mikuláš Žemlička to join their candidate's list. The party, however, ranks far behind the 5-percent limit for admission to parliament.