IN 1998, Slovakia's political scene was so polarized that post-election cooperation between opposition and coalition parties was unthinkable. 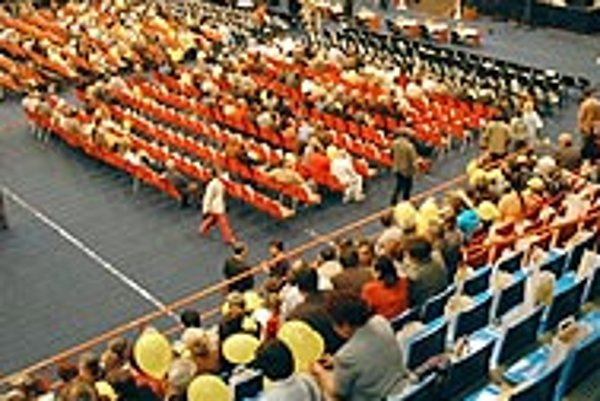 Font size:A-|A+0
IN 1998, Slovakia's political scene was so polarized that post-election cooperation between opposition and coalition parties was unthinkable.

Four years later, stark lines remained between parties thought to increase Slovakia's chances of joining NATO and the EU, and those likely to be a barrier to integration.

But in 2006, the political waters are so thoroughly muddied that virtually any party could work with any other, despite programme differences, personal animosities and political track records. In the words of one political commentator, the theme of this year's campaign is that "everyone is compatible".

The only party with virtually no chance of entering government is the Slovak Communist Party (KSS), which the majority of mainstream players have ruled out for possible post-election cooperation.

The hard-line communist party, which has enjoyed a term in parliament for the first time since the fall of Communism in 1989, actually faces a gloomier prospect than not becoming a part of the government. With KSS voter preferences ranging between 3 and 5 percent, party officials wonder whether the hammer and sickle will make it back into the legislature at all.

Yet beyond the KSS, little is certain about what the country's strongest parties stand for and, especially, what they might do and whom they might work with if they joined the new government. To dispel some of the fog, The Slovak Spectator presents an overview of the major parties and their main characteristics.

Based on recent opinion polls, the Slovak parliament that will be elected in the June 17 general elections will include seven or eight political parties, with the participation of the KSS and other smaller parties doubtful.

Sure bets for parliament include the social-democratic opposition Smer party, which has consistently topped the polls for the last several years. Smer leader Robert Fico has also been the most popular Slovak politician since the 2002 elections.

While all polls are potentially misleading, political analysts warn that Slovakia's polling is a particularly weak indicator of voter behaviour, as in the past opposition leaders and parties have tended to be more popular than those wielding power - until the moment voters enter ballot stations and cast their ballots.

In 1998, for example, Mikuláš Dzurinda's opposition SDK party led PM Vladimír Mečiar's HZDS by more than 10 points in the spring, but actually lost the September vote by a narrow margin.

In 2002, Dzurinda's ruling SDKÚ took a surprising second place and went on to form the government after Fico's surging opposition Smer tanked on election day.

While opinions vary on whether Fico's Smer will be able to turn the over 30 percent support he regularly gets in opinion polls into votes, there is no doubt the party will be a major player in the elections.

Smer has been a loud critic of Dzurinda's right-wing government, labeling the cabinet's reforms as "right-wing experiments", and vowing to roll some of them back. How deep the proposed changes might go, and which reforms they might affect, was not known at the time The Slovak Spectator went to print, as the party was to approve its election platform on May 21. However, Smer's saber-rattling on reforms has caused concern among those who support the current government's reforms, particularly the business community.

The party's full name is Smer - Social Democracy, reflecting its left wing orientation and its membership in the Socialist International. Smer's criticism of the current government's reforms has been based on the accusation that they have increased poverty in Slovakia and helped the rich get richer.

With government track record so far, Smer's behaviour if it becomes a part of the new government cannot be predicted. It is likely, however, that the party will have to make major compromises, as it is the only significant left-wing player on the political scene, meaning that the next government is likely to be a mixture of right- and left-leaning parties.

Smer officials have also refused to name parties they would or would not work with in the next government, leaving the door open to a wide range of coalition possibilities depending on the election results.

The country's other main opposition party, Vladimír Mečiar's Movement for a Democratic Slovakia (HZDS), is desperately trying to distance itself from past misdeeds while in government from 1994 to 1998, and to win friends and converts on the domestic and international stages.

Although the HZDS actually won general elections in 1998 and in 2002, it did not manage to find a partner with whom to form a coalition government, and was forced to go into opposition. Political analysts now say that after eight years out of power, the party will not survive another coalition freeze-out.

Mečiar has said he is convinced that it will "not be possible to avoid the HZDS" as a coalition partner after the general elections, and that the party will play an important role in the formation of the next government.

Nevertheless, the HZDS leader himself remains the main obstacle to his party's becoming a part of any government.

A three-time ex-prime minister of Slovakia, Mečiar is a controversial figure revered by some for leading his country out of the former Czechoslovakia, and reviled by others for his authoritarian leadership style while prime minister.

At the moment, the conservative Christian Democratic Movement (KDH), a former member of the Dzurinda coalition which quit the government three months ago, is the only one to reject Mečiar outright and rule out any cooperation with him.

Another ruling party, the Hungarian Coalition Party (SMK), has reservations about cooperation with Mečiar.

Finance Minister Ivan Mikloš, vice-chairman of the ruling SDKÚ, said recently that his party would not agree to Mečiar's holding "any significant post" in the next government.

The KDH's biggest objections to Mečiar include the fact that as acting president eight years ago, he issued amnesties that prevented the investigation of one of the darkest episodes in Slovakia's modern history - the 1995 kidnapping of the former president's son, Michal Kováč Jr. The abduction was followed by the murder of Robert Remiáš, who was acting as a go-between for a witness to the kidnapping. Police have accused Mečiar's former secret service boss, Ivan Lexa, of ordering the murder; the case awaits the decision of a prosecutor on whether it will be taken to court.

Although most of the parties that formed the government in 2002, including Dzurinda's Slovak Democratic and Christian Union (SDKÚ), originally built their profiles on a policy of opposition to Mečiar, over the years some of the edges have softened.

At the end of 2005, with Dzurinda's government on the verge of collapse due to the withdrawal of a fourth coalition partner, the New Citizen's Alliance, two MPs regarded as faithful to Mečiar unexpectedly left the HZDS overnight to join a pro-government caucus.

The SDKÚ, which espouses right-wing (neo-liberal) ideas, has since 2002 led a market-oriented government that demonstrated considerable political courage in launching unpopular reforms. However, the party former outright rejection of Mečiar has recently been toned down in the face of a new ideological enemy - Robert Fico and his Smer. While it is unlikely that Smer and SDKÚ will work together in the next government, neither party is willing to say so.

Nor has the possibility of a partnership between Smer and the HZDS been ruled out, despite how unlikely it seems. Cooperation between the SDKÚ and the HZDS is seen as more likely.

In both cases, however, much will depend on whether Mečiar still harbours power ambitions.

The HZDS' Tibor Mikuš, a widely respected politician, said recently that he believed that if Mečiar were the only barrier to the HZDS' joining the government, the party's chairman would "adopt a decision that would be in the interests of Slovakia and the HZDS".

The SMK, which regularly scores around 10 percent support, roughly corresponding to the ratio of ethnic Hungarians in Slovakia, continues to fight its image as an ethnic party. As in the past, the SMK stresses that it is a party for all Slovak citizens.

However, many of its programme priorities reveal its ethnic orientation, including its support for minority education and its challenge to the controversial Beneš Decrees, a set of measures by which many ethnic Hungarians were deported from Czechoslovakia and their property confiscated after the Second World War.

In spite of the occasional escapades of some of its more radical members, the SMK has proven a stable and reliable partner in the last two governments, never holding the administration hostage to achieve its own interests.

The conservative KDH, on the other hand, did just that in February by withdrawing from the coalition over the refusal of the cabinet to support a treaty with the Vatican. The KDH has been building an image as a Christian party, and has traditionally been strong on justice and security, family and pro-life issues.

The party's strong anti-Mečiar element is seen as having pushed it closer to Smer over the last four years, especially because the parties share opinions in the area of justice.

The Free Forum (SF) party is also currently represented in parliament, having been established in 2003 by a group of SDKÚ defectors who left the party in protest against Dzurinda's rule, especially his firing of the former defence minister, Ivan Šimko, who later went on to found the SF.

The SF now communicates with a wide spectrum of parties, although it declares itself to be pro-reform and to represent the middle class.

It is also the only Slovak political party with a female leader. Former journalist Zuzana Martináková joined the SDKÚ before the 2002 general elections, and later took the leadership of the SF from Šimko in a surprise vote.

The last party with realistic hopes of entering parliament is the far-right Slovak National Party (SNS).

A former member of the 1994-1998 Mečiar coalition government, the SNS went on to tear itself into two parties and knock itself out of contention for the 2002 parliamentary elections.

The main figures in the former turmoil - current SNS leader Ján Slota (see interview, page 3) and Anna Belousovová - have ceased combat and say they are confident they will join the next government.

The party says it supports economic continuity and greater sovereignty for Slovakia in international groupings; it also has notable anti-American, anti-Hungarian and anti-Roma strains.

Although the SNS currently enjoys the support of around 7 percent of the population according to the polls, it is still unclear whether it will really secure enough support to enter parliament.

Slota said recently that Smer would be an ideal partner for the SNS.

While little is clear about what is in store after the June 17 elections, analysts agree that the main theme will remain whether Slovakia continues reforms at the current pace, or whether it takes the cauldron of change off the boil.