Migrating with the shrikes: a birding odyssey

IT'S 6:30 in the morning on May 1 and the temperature struggles to break freezing. A cold fog drifts across mountain meadows and through forests of towering spruce trees. I struggle to hike through half-metre deep snow to reach a patch of old growth forest near the summit of Poľana mountain (1,458 m). The icy snow resembles a snow cone with pine needle sprinkles. 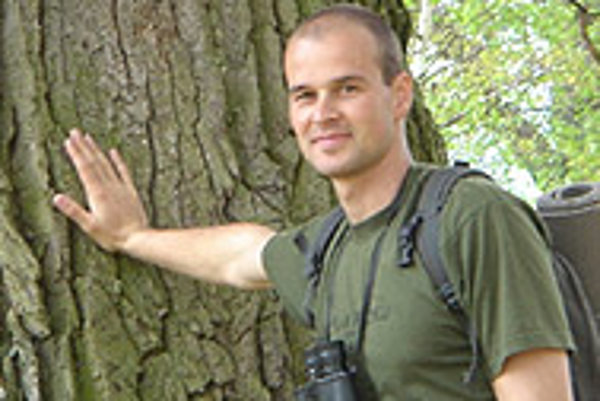 Font size:A-|A+  Comments disabled
IT'S 6:30 in the morning on May 1 and the temperature struggles to break freezing. A cold fog drifts across mountain meadows and through forests of towering spruce trees. I struggle to hike through half-metre deep snow to reach a patch of old growth forest near the summit of Poľana mountain (1,458 m). The icy snow resembles a snow cone with pine needle sprinkles.

At one point I slip and tumble down a short slope, banging my arm. As we cross a small meadow near the summit, Dr. Peter Lešo, my guide, hears a distinctive song and focuses his binoculars on a small bird sitting on the top of a spruce tree. "A Ring Ouzel," he calls out. This thrush species, with its distinctive white collar, can only be found in upland, wooded areas like the Poľana Biosphere near Detva. It is a bird I've never seen before - a life bird - and one of Slovakia's 92 endangered avian species.

Interest in birds is strong in Slovakia. The Slovak Society for Bird Protection (SOVS) boasts over 1,000 members. Slovakia also has an active bird banding programme and a distinguished ornithology program at the Zvolen Technical University led by one of Central Europe's premier avian scholars, Doctor Anton Krištín.

For non-Slovak birders, however, it's off the radar screen. Birders generally travel to foreign countries for "endemics", or in lay terms, birds that only live in a particular country or region. Slovakia has no endemics. However, 336 bird species (approximately half of Europe's birds) reside in the country, including the Imperial Eagle, the Saker Falcon, and all ten of Europe's woodpeckers. A trip that combined the mountains and forests of Slovakia with the wetlands and grasslands of Hungary or the Neusiedler See in Austria would be among the best possible birding itineraries in Europe. Moreover, Slovakia has a superb system of hiking trails, national parks, and wildlife preserves.

I birded Slovakia for four days with Dr. Lešo. We started at Poľana and worked our way down lower elevation habitats. On our second day, we hiked around Bystré Vrátka, an area of terraced farmlands that borders the Poľana biosphere above Hriňová. There we saw many old world warblers, tits, thrushes, and many other European species. We also spotted some Red-backed Shrikes. The shrike is one of the world's most unique birds. It perches on branches and sings like a songbird, but there is where the comparison ends. Known as the "butcher bird," this fierce predator impales large insects (and occasionally small birds and mammals) on thorns and then disembowels them with a hook at the end of its beak.

Dr. Lešo, a faculty member in the Department of Forest Protection and Wildlife Management at the Zvolen Technical University, found over 50 birds during a morning of light walking. He also pointed out unusual plants, insects, and amphibians. Birdwatchers see a lot more than birds. During my trip, I saw rabbits, two different species of deer, a hedgehog, and several spotted salamanders. The more I birded with Dr. Lešo, the more I began to appreciate Slovakia's ecology. Although we often hiked just a few kilometres away from large towns, the forests quickly enveloped us and made us forget about civilization. After a few days, I leaned the vocalizations of the most common Slovak birds and only queried Dr. Lešo when I heard an exotic sound.

On our fourth day, we travelled to Gavurky, a former military reservation south of Zvolen now reserved for wildlife. There I heard a unique song, scanned a nearby tree with my binoculars, and spotted four Golden Orioles. Easily heard but rarely seen, the Golden Oriole stands out as one of Europe's most beautiful creatures and Gavurky, with its thinly wooded pastures is a perfect place to find them. It's also home to many skylarks. Praised by poets and musicians for its song and ascending flight pattern, the skylark is a hard bird not to love. Its cousin, the Crested Lark, is less appreciated. It often forages in parking lots, but cannot be found in some parts of Europe. We were lucky to spot one in the Hypernova parking lot outside of Zvolen.

Another misunderstood European bird is the House Sparrow. Introduced to North America by the British in the late 19th Century, this bird, which is actually a finch species, quickly became dominant in most urban areas of the United States. Although now one of America's most common birds, their numbers are rapidly declining in Europe and no one knows why. A farmer in Bystré Vrátka told us that he once had 200 House Sparrows on his property, but now only has 12.

In four days of birding in the Zvolen/Detva area of Slovakia, I saw or heard 75 species and 57 life birds. A bird I dreamed of seeing was the hoopoe-a migrant from Africa that looks like something out of a Harry Potter novel. These birds can often be found in meadows and pastures, but we arrived in Slovakia a little early to see one. I did hear its unique "oop-oop-oop" song on several occasions, allowing me to count it on my world list under the rules of the American Birding Association.

To further build up my list, I spent two additional days birding the Neusiedler See National Park south of Vienna. For international visitors flying to Slovakia via the Vienna or Bratislava airports, Neusiedler See represents the quickest and easiest place to find waterbirds, as well as such exotics as the Great Bustard and various falcon species. The Great Bustard looks like something between an ostrich and a turkey. It's the heaviest flying bird on earth and can be found at Neusiedler See as well as the Danube floodplain in southeast Slovakia. I not only saw Great Bustards at Neusiedler See, but also a rare Red-legged Falcon, and more wading birds than I can name in this article. In a day of birding, Dr. Martin Riesing, an ornithologist from Vienna University, showed me 88 species and 50 life birds.

Without the help of experienced bird guides like Riesing and Lešo, identifying some of Europe's birds would have been very challenging. Many European warblers, for example, look identical. Only by hearing the bird's song and understanding their behaviour can many of them be properly identified. Learning the vocalizations, visual characteristics, and behaviour of Europe's 688 regular species of birds takes years of training and hard work.

I found both of my guides via the Stopa-STS Travel Agency in Zvolen (www.travelslovakia.sk), a company that offers specialized ecological tours of Slovakia, including birding adventures.

All birders have a nemesis bird - a relatively common species that for some inexplicable reason they cannot find. Before the trip, I had birded in North America, Costa Rica, and Peru and still did not have a shrike on my list. Dr. Lešo delivered several Red-backed Shrikes on our first day of birding, but the Lesser-Grey Backed Shrike proved much more elusive. At one point, we asked a farmer in an old Slovak Army cap if he had seen any. "No, they aren't here yet," he replied. Lešo then mentioned that they usually fly in at the end of April and so they must be around. "You're full of it professor," the farmer responded, "they aren't here." We searched the remainder of the day for one but to no avail.

I woke up early the next day to look at the common birds nesting around the farm where I was staying. I gazed at what I thought was a Blue Tit through my binoculars, but noticed it had a longer shape and the distinctive black mask of a shrike. "Must be a Red-backed," I thought, but then it turned around and I noticed its distinctive grey back. I walked down the road and saw six more. The Lesser-Grey shrikes have returned: Spring has finally arrived in central Slovakia.