Women in charity raise their voice

"WE have money and we want to give it away to charity," said Zora Grohoľová from the International Women's Club of Bratislava (IWCB). 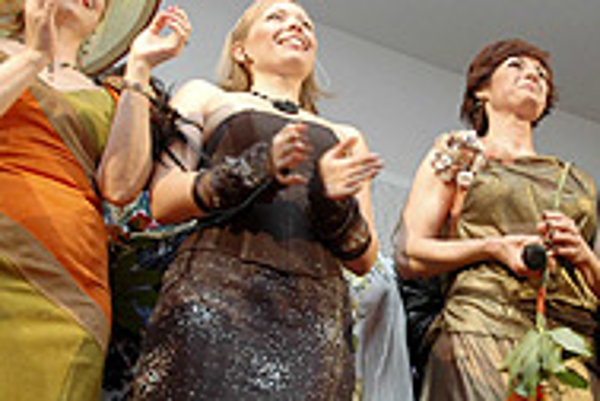 Font size:A-|A+  Comments disabled
"WE have money and we want to give it away to charity," said Zora Grohoľová from the International Women's Club of Bratislava (IWCB).

But after fifteen years' experience, the club, which currently boasts 200 members from over 40 countries now living in Slovakia, has learned that having its heart in the right place isn't enough to make up for a lack of transparency. Therefore, on May 12, it decided to go public with its charity Fashion Show.

Some IWCB members are ambassadors themselves, while others are wives of ambassadors, diplomats and businessmen. The club helps the women come in contact with locals, and the women reciprocate by supporting Slovakia's charitable projects.

"There were oft-repeated requests for money and large organisations generally applied for it," said the club's first Slovak president, Viera Buchtová. "We wanted also people in the country's very eastern regions, those who need the money most, to know how to get it."

The IWCB donated Sk600,000 (€16,000) during the fashion show to the Elementary School for Children with Lingual Defects, an orphanage in Malacky, the Therapeutic-Educational Sanatorium for Boys, and the Association for Battered Women.

Many of the club's first-time fashion models felt self-confident on the stage.

"They come from countries in which fashion is a natural part [of life]," Slovak designer Lea Fekete told the daily SME.

According to Grohoľová, the club generates donations through various activities and events. The most popular is the Christmas Bazaar, where club members cook and sell delicacies and various souvenirs from their home countries.

The club then donates the money to underprivileged groups, such as orphans, the elderly, the homeless and battered women.

"Many institutions, such as nursing homes, have basic equipment, but nothing that would make life there more comfortable or healthier," said Zuzana Havlíková, the head of the club's charity committee, which visits each project.

Many members call the club a lifesaver. "I entered the club as soon as I arrived, which was in September 2003," said Myriam Vauthey-Marano, the wife of Christophe Vauthey, a consul at the Swiss embassy. "I knew nobody here, and I didn't understand a word of Slovak. Through the club I am learning Slovak, making new friends and take part in activities organised by the club."

Unlike in other countries where similar clubs serve only to help foreigners deal with the local unfamiliarity and get the needed pat on the back, the Bratislava organisation includes locals as well as foreigners. In fact, the club was founded by Slovaks, and on the evening of May 12 it extended membership to yet another local citizen - the president's wife, Silvia Gašparovičová.