THE WHOLE world best knows Leonardo da Vinci as a great Renaissance artist, though he created only 26 paintings during his entire life and only 17 of them have been preserved until the day. 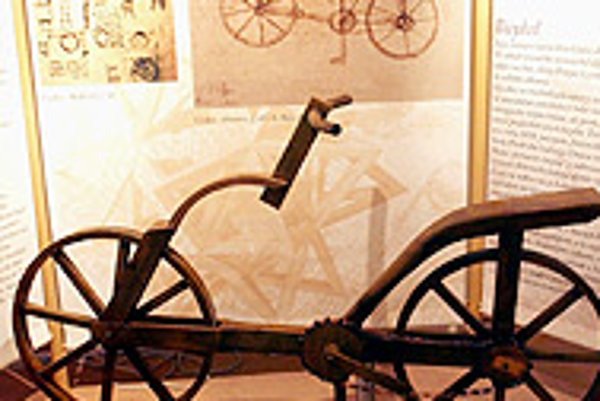 Font size:A-|A+  Comments disabled
THE WHOLE world best knows Leonardo da Vinci as a great Renaissance artist, though he created only 26 paintings during his entire life and only 17 of them have been preserved until the day.

The exhibition at Bratislava Castle entitled Leonardo da Vinci: Curious Genius introduces him as a Renaissance man in the complex meaning of this expression. It presents him as an architect, astronomer, optician, inventor, scientist and designer of weapons, bridges and flying machines.

Leonardo put all his studies of flying, war, water, construction of bridges, human anatomy and other things that piqued his curiosity, down on more than 13,000 sheets of paper. Many were lost soon after his death, fewer than 7,000 of them have been preserved to this day.

"The story the exhibition tells is a story of one of the best known of Leonardo's codexes - a collection of various sheets of the genius from Vinci," the exhibition coordinator Carlo Barbieri told the Pravda daily.

"A sculptor, Pompeo Leoni, carefully collected them in the second half of the 16th century. In an effort to prevent irremediable damage, he glued them into a huge album, which he named Codex Atlanticus. It demonstrates an extraordinarily wide scope of Leonardo's research and experiments, as well as the beauty of his drawings as an engineer and architect," Barbieri explained.

Many of his inventions came to life only several centuries later, even though we cannot imagine life without them now.

The core of the touring exhibition consists of 60 sheets from the first facsimile edition by Hoepli, 1894-1904, of Leonardo's famous Codex Atlanticus. Models of a diving suit, glider, parachute and bicycle on show come mostly from the museum in Vinci, where they were constructed in the 1950s, as well as other historical collections.

The exhibition juxtaposes models based on the approximately 500-year-old studies with current-day high-tech products, such as the Ferrari engine, pointing out the amazing progress science and technology have made since Renaissance times. An ultra-modern ball bearing stands next to da Vinci's, and today's bicycle can be compared with da Vinci's prototype.

The display also offers insight into Leonardo's private life, describing his relationships with significant personalities of the day and referring to the genius also as an author of riddles and puzzles.