DETERMINED to make its breakthrough in Central Europe, the Slovak alternative rock band Dilemma set out for the third Nová Krev (New Blood) contest, which is the Czech Republic's equivalent of the Coca Cola Popstar search for new talents. Pit against 180 Czech and 2 Slovak bands, the young musicians from Košice played hard, and came out on top. 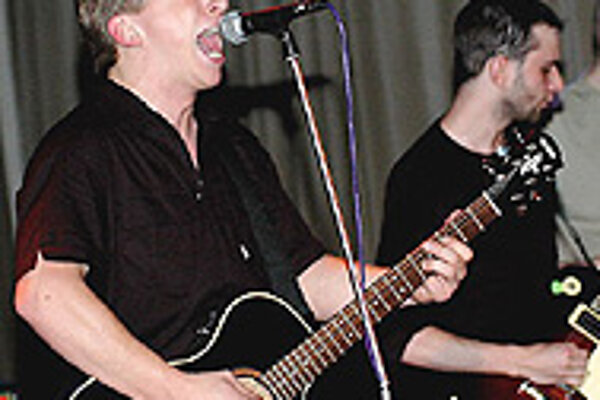 Font size:A-|A+  Comments disabled
DETERMINED to make its breakthrough in Central Europe, the Slovak alternative rock band Dilemma set out for the third Nová Krev (New Blood) contest, which is the Czech Republic's equivalent of the Coca Cola Popstar search for new talents. Pit against 180 Czech and 2 Slovak bands, the young musicians from Košice played hard, and came out on top.

"We never expected this because the quality of the competitors was so high," the band's leader and singer Ján Spišák told The Slovak Spectator.

"The band surprised us with its ferocious and animal-like performance. The guys clearly enjoy playing and don't pretend to be someone else," said musician and producer Jakub "Schafff" Šafránek, who headed the jury.

Šafránek also said that the band incorporates "elements that seem completely incongruous at first, such as drum and bass or Latino", in a non-violent, very natural way.

Dilemma was founded in Košice around 1995 but actively started performing two years ago. Spišák's singing is supported by Patrik Duditš on keyboard and Michal Broniš and Tomáš Čižmárik on guitar. Braňo Bača and Kamil Sinicyn provide the rhythm. The band has more than 50 songs in Slovak, English and Czech in its repertoire.

After winning Slovak Radio's Music Duel contest last year, many local radio stations have been playing Dilemma's songs, yet it has remained rather unknown at home.

That situation, however, is about to change. The band's recent accolades have helped it to get the support it needed to record its debut album, which should be released in September. Soon after, the band, which experienced how attractive it can be for a foreign audience, plans to return to the Czech Republic and Belgium, where it toured in May 2005.

"The Belgian media, which knew nothing about us until recently, said as much about us in a week as the Slovak media has said in over half a year. This was reflected in the number of fans who came to the clubs and festivals we played at," Spišák said.

Spišák believes the band attracts with its live show, hard-rock style and perhaps even the Slovak language. "The Belgian rock scene typically plays slow, cool and low key. We were the exact opposite.

"In addition, Belgians like to discover new things and they knew to let go at our concerts. We played in one club, where Deep Purple also played, and the locals, mostly motorbikers, knew how to let loose."

Clearly, having a good time on stage and with the audience is the band's aim. Increased popularity is only a means of tapping the right resource.

A similar approach can be detected from Dilemma's music-making process. Its rocky style is like a sponge, absorbing and incorporating whichever influences band members prefer. Inspiration occurs "on its own" or during jam sessions. However, it can take over half a year until the band is satisfied with the result.

Dilemma's English lyrics reflect the same feelings found in their Slovak texts - such as loneliness and occasional sarcasm. But Spišák says, people have learnt to listen to songs without understanding the lyrics, so universal themes are the emotive bridge that communicate what one fails to comprehend.

The band's debut album to be released in September will have around a dozen tracks of old mixed with new in a refreshing approach that mirrors the band's diverse style.

"The level of unknown and new bands in the Czech Republic is higher than [in Slovakia]. People approach music more precisely and feelingly and, above all, it has a greater background there," Spišák said, adding that winning the Czech prize could help the band to succeed on the stages of both republics at the same time.