The week of modern opera

TWO years ago, the Slovak National Theatre (SND) set out to prove that opera and ballet are "living music theatre forms that can address today's public". 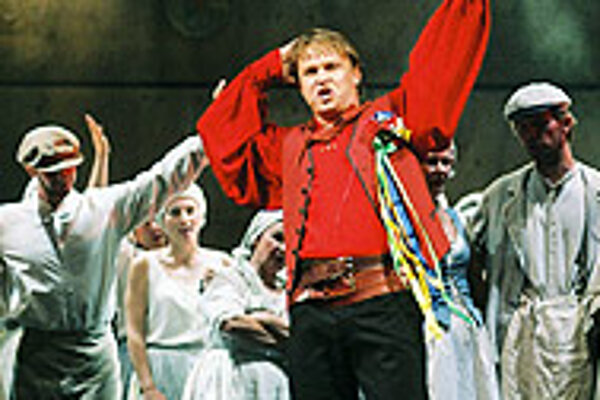 TWO years ago, the Slovak National Theatre (SND) set out to prove that opera and ballet are "living music theatre forms that can address today's public".

This year, it continues that mission. From June 2-12, the second annual International Music Theatre Festival Bratislava 2006 will present eight works, the majority of which are SND productions, that offer a diversity of approaches and serve as mutual inspiration. The festival's guests come from Austria and the Czech Republic.

As an example, Chudovský cited the production of Dvořák's Rusalka, when the Prague National Theatre's stage director Jiří Nekvasil got together with Slovak colleagues. The opera premiered at the SND in March 2005. On April 27, 2007, the theatre plans to premiere another result of the festival - Richard Strauss Ariadne auf Naxos, conducted by Walter Kobéra from the Neue Oper Wien.

The first group to perform at the festival includes the SND's Peter Grimes and The Players and the Neue Oper Wien's Die Zauberflöte 06 (The Magic Flute 06) by Thomas Pernes.

"We are happy to be back," said conductor Kobéra, who also serves as general manager of the Neue Oper Wien.

"We will arrive with a work that is part of the Year of Mozart," he said, referring to the world-wide celebration that has marked the 250th anniversary of the composer's birth.

Kobéra explained that Die Zauberflöte 06 leaves little untouched from the original work. "You will recognize the characters but they will perform in a different context. Fragments of Mozart's original music performed by a classical orchestra will be mixed with recordings of what is now called 'crossover', ranging from pop, rock to electronic music."

In the second group of productions will be the Prague National Theatre's Prodaná nevěsta (The Bartered Bride) by Bedřich Smetana, led by renowned Slovak conductor Oliver Dohnány, and the SND's Eugen Onegin by Piotr

The SND will also participate with the ballet Don Juan, which offers a fresh view by young creators - Mirko Krajči and Igor Holováč - of one of literature's oldest characters. The ballet is also a contribution to the Year of Slovak Music.

The SND will open the festival with its premiere of Mozart's Le Nozze di Figaro, which is also meant to contribute to the Year of Mozart celebrations. The production was directed by renowned actor Martin Huba, who proved his talent for opera direction with Juraj Beneš's The Players.

However, some bumps in the road remain for the festival. The theatre from Budapest originally scheduled to present had to cancel due to financial concerns. "The sponsors who promised support did not keep their word," said Chudovský, adding that economic issues prevent the festival, which receives no state support, from attracting more international guests.