Public vs private debate far from over

IN anticipation of the upcoming general elections, Health Minister Rudolf Zajac recently looked back on his four years in office.
One of his main points arguments in launching his reform was that turning hospitals into enterprises that run on business principles would ensure that the healthcare system used money more efficiently. 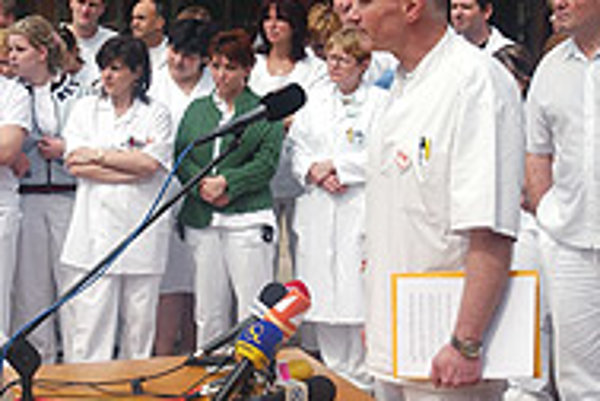 One of his main points arguments in launching his reform was that turning hospitals into enterprises that run on business principles would ensure that the healthcare system used money more efficiently.

Zajac regretted that the transformation of the largest and most important Slovak hospitals still isn't complete. "The government allowed itself to be influenced by political interests at the end of the election term," he said.

The transformation of healthcare facilities into joint stock companies sparked fierce debate and was one of the reasons for the recent hospital strike. Critics were especially upset at the ministry for allowing strong financial groups to enter the healthcare sector, which they see as just the first step toward complete privatisation.

The Slovak Spectator asked the Health Ministry, the Health Policy Institute - which wrote the reforms - and the Doctors' Labour Union, which initiated the recent strikes, to comment on the transformation and the future of privatisation in the sector.

Transformation means a change in a facility's legal status to a joint stock company or a non-profit organisation.

So far, five medical centres have been transformed into joint stock companies, but the cabinet halted additional transformations until after parliamentary elections, so the rest will have to wait.

The changes will create far better conditions for efficient economic performance, the use of resources, higher quality services and better salaries for medical workers.

The healthcare system need money, and the influx of capital can ensure it gets it. For example, the arrival of capital into rescue services has led to improved equipment and staff in that sector.

The health ministry does not see any reason to prevent investors from acquiring institutions, as long as it is done according to the rules set out in the legislation. On the contrary, it is in favour of further development and patient satisfaction.

The transformation of hospitals into joint stock companies is one of the key aspects of the national healthcare reform. Hospitals will become standard companies with standard organisational structures, accounting, external audits and accountability.

Providing health care is not a role for the state, and that is why I don't see a problem if private investors own hospitals. The role of the state is to set the rules of the game and enforce them through the use of independent institutions.

The aim of the reform was to build a system in which everyone bears a part of the burden - health insurance companies for buying healthcare services, provider for supplying quality services, and patients for staying healthy.

We are against the transformation of hospitals into joint stock companies mainly in case of large hospitals for a simple reason. Large teaching hospitals can guarantee the highest quality. The interests of patients or medical workers are not a top priority for financial groups.

The unions say that if a facility is privatised, the employees should be taken into account, so that they can create enployee joint stock companies or other forms of companies. After all, a health care worker should be able to provide the best services and be the best manager, as they have the greatest interest in providing the best health care. Often, people from the outside, often with a close relationship to those who decide on granting licences, becomes the new owner. Employees are interested, but they never get a chance.