KDH: Slovakia should be sovereign

MARCHING under the sign of a stork, an election mascot meant to evoke the theme of family values, the Christian Democrats (KDH) believe their conservative agenda will garner enough votes to give the party a decisive say in how the next government is shaped. 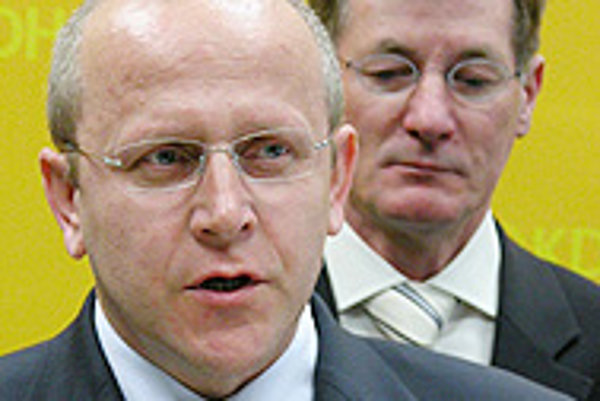 Font size:A-|A+  Comments disabled
MARCHING under the sign of a stork, an election mascot meant to evoke the theme of family values, the Christian Democrats (KDH) believe their conservative agenda will garner enough votes to give the party a decisive say in how the next government is shaped.

The KDH formerly served as a member of the ruling coalition, but joined the opposition following a clash with Prime Minister Mikuláš Dzurinda over the cabinet's refusal to support a treaty with the Vatican. It now rejects the idea of joining a new right-bloc coalition.

The KDH, which has traditionally been strong on justice and security, as well as family and pro-life issues, and fiercely opposes legal recognition of same-sex partnerships, has also been raising its voice recently while defending Slovakia's sovereignty within the EU over tax issues.

The Slovak Spectator spoke to the KDH's Pavol Abrhan about the upcoming parliamentary elections and issues close to the party's heart.

The Slovak Spectator (TSS): The KDH stated it would pursue the adoption of a declaration on Slovakia's tax sovereignty. What would be the essence of such a proposal, and would it stand a chance of being approved?

Pavol Abrhan (PA):In the area of tax policies, indeed, we will submit a declaration in line with the constitutional law on cooperation between the cabinet and parliament in European Union issues that will protect Slovakia's sovereignty in making independent decisions on issues of direct taxes.

The declaration will bind members of the cabinet and state bodies representing the country at European Union forums to neither agree with the harmonisation of direct taxes, their rate or tax basis nor support the creation of a European tax.

TSS: International organisa-tions have been critical of the payroll tax burden in Slovakia. Do the Christian Democrats view the high compulsory payments to health and social insurance funds as a problem? What tax policies will the KDH pursue after the elections?

PA: In the sphere of economic reforms, the Christian Democrats will insist on preserving the flat rate for income taxes and also the flat value added tax. In the long term, we might try to gradually reduce income taxes from 19 to 14 percent. However, the priority will be the reduction of payroll taxes.

TSS: You have said several times that the programs of the KDH and the Slovak Democratic and Christian Union are compatible in many areas but that Mikuláš Dzurinda's leadership style is unacceptable. What are your party's main objections to Dzurinda?

PA: Mikuláš Dzurinda did not stick to what he agreed. One example was his failure to keep to his government's program concerning the Treaty on Objections of Conscience with the Vatican.

TSS: Will the KDH continue to push for that treaty?

PA: The treaty between Slovakia and the Holy See is one of the KDH's priorities. Indeed, Slovakia is bound to adopt the document by its basic treaty with the Vatican.

At the same time, we are pushing for a state agreement with the same wording between all the registered churches in Slovakia.

TSS: Which points of your election program from 2002 did you fail to fulfill?

PA: The KDH fulfilled 90-95 percent of its election program in areas concerning the departments of interior, justice and education. In the sphere of justice, we tried to adopt a constitutional change that would have moved state prosecutors under the Justice Ministry, as they are in almost all democratic countries.

In education, we failed to achieve the co-financing of university study and the adoption of a law on education.