LAUGHTER is a great way to celebrate the Year of Mozart, which marks the 250th anniversary of his birth. Mozart was an avid prankster, who even hid in-jokes in his compositions, such as traces of Martín y Soler's comic opera Una cosa rara in the banquet scene of Don Giovanni. 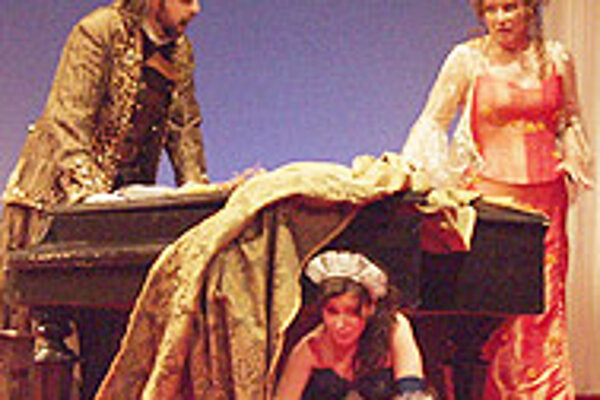 LAUGHTER is a great way to celebrate the Year of Mozart, which marks the 250th anniversary of his birth. Mozart was an avid prankster, who even hid in-jokes in his compositions, such as traces of Martín y Soler's comic opera Una cosa rara in the banquet scene of Don Giovanni.

It was also partly Mozart's genius for humour that attracted him to Beaumarchais' razor-sharp satire, The Marriage of Figaro. The play had been banned throughout Europe for promoting tenets of the Enlightenment deemed subversive: that servants were just as human as - and sometimes more resourceful than - their lords - and that reconciliation can overcome antagonism.

Communicating that crisp wit, while keeping the heartfelt emotions that make the characters so sympathetic, was the task of Martin Huba, the great theatre actor, who directed last weekend's premiere of Figaro at the Slovak National Theatre (SND). My expectations were high, since Huba's previous effort as stage director - Juraj Beneš's The Players - exuded a bold freshness that made it the most memorable premiere of the SND's 2004/2005 season.

But, as the old saying goes, lightning rarely strikes twice.

This production appeared to have multiple themes. The first was intimacy, as Figaro and Susanna's room, designed by set designer Jozef Ciller, was smothered in a crimson velvet motif that made it look more like a St Valentine's Day suite than servants' quarters. Also, to push everyone closer, the stage and orchestra pit were adjoined, which meant all the performers had to pass each other as they entered and exited.

Or perhaps that was meant to contribute to the second theme: reversals. In costumes designed by Milan Čorba, Figaro was just as dapper as the Count, and his bride-to-be, Susanna, just as sparkling as the Countess. The SND explained this, as well as the entering from the orchestra pit, as an attempt to make the characters seem as though they were giving a recital, then gradually melt into the drama. It didn't work.

Martin Malachovský exhibited some of the energy required of Figaro, but at the expense of his vocal technique. His Act I cavatina Se vuol ballare, in which stinging pizzicato notes symbolise his vow to thwart the Count's plans to conquer Susanna, was well-accented, but the high notes were coarse shouts. Jana Bernáthová was a fittingly youthful Susanna, who could've used a smoother, softer roundness.

The most surprising interpretive twist concerned Count Almaviva, who is traditionally portrayed as progressive, deeply principled and striving to maintain external and internal order. This endears him to his wife, who eventually forgives him for almost straying from her and to a sympathetic audience. The fact that he's also not the brightest bulb in the box makes the tricks pulled on him realistic and comedic.

Ján Ďurčo delivered much more sinister, almost Don Giovanni-esque shadings. Through his superior diction and command of the music, Ďurčo was intimidating and domineering, effectively eliminating the idea anyone would even dare hide anything from him. This was far too dark a tone for opera buffa.

As the evening progressed without much laughter and Act IV seemed to drag on, my thoughts turned to whether, as in other places, Figaro is a staple of conservatory training here. If so, where was mastery of tone, comic timing and ensemble dynamic?

The Players was whatever Huba made it, but Figaro is an established classic that accepts no excuses.