A NEW era began at the Slovak National Theatre (SND) as Silvia Hroncová, the former head of the Theatre Institute, was selected to become the first female general manager in its 86-year history. 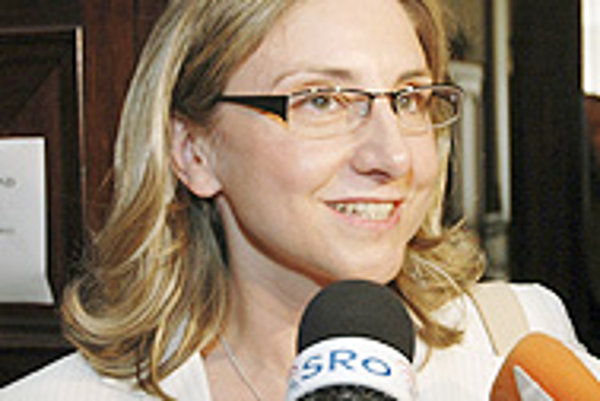 Font size:A-|A+  Comments disabled
A NEW era began at the Slovak National Theatre (SND) as Silvia Hroncová, the former head of the Theatre Institute, was selected to become the first female general manager in its 86-year history.

A 14-member committee chose Hroncová out of six candidates because her approach "was complete and forward-looking, yet mindful of the past". Culture Minister Rudolf Chmel officially named her to the position on June 2.

Hroncová, 41, plans to strengthen the communication between the theatre and public at home, as well as abroad. She will preserve the theatre's three ensembles - drama, opera and ballet - and support the creation of original works. She also intends to increase efforts to attract Slovak artists living abroad and increase the theatre's number of visitors.

The main challenge facing the new director is the theatre's relocation to a brand new building on the Danube's embankment. In the new premises, Hroncová plans to enlarge the theatre's activities with educational projects, seminars and other presentations, assuring its daylong use.

The Slovak Spectator (TSS): Until now, the Slovak National Theatre's general managers have always been experienced stage directors or actors. What will be your impact as a non-director, non-actor and woman?

Silvia Hroncová (SH): Seeing that Slovakia is still regarded as being quite conservative and patriarchal, I'm glad to see more women entering managerial positions. The national theatre is moving to new, challenging and, until now, unexplored waters, and it is very important that the leadership be in the hands of a cultural manager.

Over the last eight years as director of the Theatre Institute, I've got to know the detailed conditions and problems of the Slovak theatre environment. At the same time, I have acquired the entire range of skills needed for managing culture. I would like to put these experiences to use in transforming the SND.

TSS: How do you perceive the SND's position and social role in a market that's become heavily commercialised? How can it stand out in the public eye?

SH: My basic vision is to make the SND a top European institution not only in terms of productions but also in the way it is managed. No doubt that, due to the theatre's new building being used as a political tool and the overall condition of cultural institutions in Slovakia, public opinion about the SND is not very positive. Changing this perception is my main aim. But to reach it, this institution needs quality productions, effective management and public participation.

The tradition the SND carries should become more available to the public thanks to new methods in leadership and the concept of managing the new building. The SND should take part in creating a healthy and modern cultural environment in Slovakia.

TSS: What is the first thing you will do as the new director?

SH: I've ordered a complete audit of personnel, economic concerns and materials, which should lead to further steps. Of course, I want to meet with all the ensembles and their employees to get a better view of the entire atmosphere and, at the same time, introduce my concept.

TSS: How do you evaluate the separate divisions of the theatre? Where do you see potential for the greatest changes?

SH: The artistic potential of the SND has traditionally been very high. However, a highly obsolete structure and management style has made it nearly impossible for that potential to be used to its fullest extent. Opera and ballet are obviously the proper genres for international provocation, but to stand their ground - and I mean that not only artistically - several changes must be made in their management.

TSS: Do you plan to reshape the theatre's programme structure? How would that effect the number of premieres, structure of festivals, or other events? How will the move to a new building add to it?

SH: I'm convinced that individual ensembles must retain their artistic freedom and autonomy. Central management and decision-making, on the other hand, has to involve entire programme planning of the building and its 24-hour use.

I care that the public views the new SND building as a real cultural institution in all its spheres. In addition to top cultural events, it should offer quality services. Availability to the public and a wide range of educational activities are important factors in achieving that.

TSS: As a theatre theorist, you worked mainly with contemporary drama. Will this be reflected in the national theatre's repertoire?

SH: As I said, I don't want to interfere with matters of repertoire. Nevertheless, I think that one of the national theatre's main tasks is to stimulate and develop original drama works. It is not only about introducing works by Slovak playwrights but also about exploring foreign contexts and creating projects that encourage playwriting. National theatres in Europe traditionally serve this purpose.

TSS: As you say, supporting original work is essential. How creative is the potential in that sphere?

SH: It is as similar in drama as it is in every other type of art. Only one attempt of many gets to the top. It means that, if there are many plays written here and these are consequently presented in various theatres, we can gradually generate successful writers. My experience with organising drama competitions, which the Theatre Institute has been holding for six years, proves it. This year we have seen several new young writers who can write on a very high level.

TSS: You also believe it's important to increase the number of theatregoers and presentation of the ensembles at home, as well as abroad. What steps will you use to achieve this?

SH: Increasing the number of visitors is a gradual process. It must be preceded by organisational restructuring after the theatre moves to its new building, completing the Pribinova zone construction and changing the theatre's programming philosophy. This would make the new building a cultural location that provides quality in all its spheres, practically daylong.

TSS: Do you plan to attract some international stars, or famed Slovaks living abroad?

SH: It's very surprising how many Slovak artists, and particularly theatre actors, successfully work in top foreign ensembles, yet we know practically nothing about many of them. I would like to give them more opportunities and open the theatre to international projects and co-productions. I think we have a real chance of becoming a country people would come to for quality art.