Covering all the angles

THE DANGER of elections, especially when six parties are in the hunt for a place in government, is that comments made a day after elections may be irrelevant 24 hours later.
Nevertheless, The Slovak Spectator presents the thoughts of two leading observers of Slovak politics - Grigorij Mesežnikov of the Institute for Public Affairs think tank, and Kevin Deegan-Krause of Wayne State University in the US - in the belief that their views have longer-lasting implications. 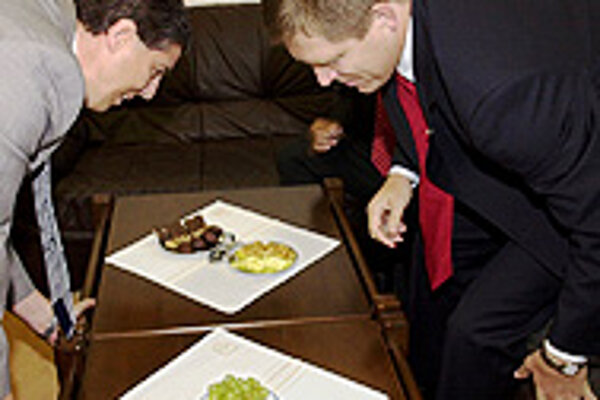 Font size:A-|A+0
THE DANGER of elections, especially when six parties are in the hunt for a place in government, is that comments made a day after elections may be irrelevant 24 hours later.

Nevertheless, The Slovak Spectator presents the thoughts of two leading observers of Slovak politics - Grigorij Mesežnikov of the Institute for Public Affairs think tank, and Kevin Deegan-Krause of Wayne State University in the US - in the belief that their views have longer-lasting implications.

The Slovak Spectator (TSS): Political scientists have raised the possibility of a coalition formed between Smer, the far-right Slovak National Party and the Movement for a Democratic Slovakia as a worst-case scenario. How would the international community respond to such a grouping?

Grigorij Mesežnikov (GM): The possibility of such a coalition was used as a scare-tactic against potential coalition partners or as a justification for parties to join a coalition with partners that are not close in terms of ideology.

Both Smer and the HZDS could lure current ruling coalition parties to become their partners in return for rejecting cooperation with the other [i.e. either the HZDS or Smer] or even Ján Slota. In the same way, the KDH and the SMK will be able to say that by entering such a coalition they were preventing the worst-case coalition scenario from becoming reality.

I don't think this coalition is the most likely option, but it can't be ruled out. The possible implications of such a coalition could be a catastrophic image for the country abroad. The impact would be even worse than in the case of Poland, where populists from the Self-Defense and the League of Polish Families made it to power. I don't think that the European Union would levy any sanctions, but during the time it was ruled by such a government, Slovakia would find itself on the absolute periphery of the EU, while its citizens would not see any of the fruits of the positive things that have been done over the past few years. The approach to reforms would again be to "muddle through" or to partially cancel them. Most of Slovak civil society and the media would be very hostile to such a government and would wage a silent civil war of opinion.

Kevin Deegan-Krause (KDK): I believe that the international community would not look fondly on a Smer-SNS-HZDS coalition. There is already a degree of concern, I believe, about Fico's idiosyncratic and personalized style, and this would be compounded by concerns about the raw ethno-nationalism that has defined [Ján] Slota's SNS campaign as well as concerns, rather more muted, about Mečiar's past violations of democratic principles.

There is, however, a question of how much this really matters. The Haider affair in Austria suggests that even the EU can do little about the internal politics of member states, and it is unlikely that EU concern would rise to that level unless a Smer-SNS-HZDS coalition took steps that were actively hostile to minority groups or democratic principles. Even then, it is unclear what the international community would do.

I think it is also unlikely that such a coalition would have much internal stability. The SNS regards Smer as its only chance to get into government, so it might be rather subdued, but the HZDS - or, to be more precise, Mečiar - might not be so submissive and might relish the chance to play spoiler to Fico's career plans by threatening to withdraw and offer support to the other side. Fico, for his part, has more options, and might not find it impossible to discard a balky SNS-HZDS coalition and find support from the KDH and perhaps another party from that side.

TSS: The Hungarian Coalition Party (SMK) has said several times that it would not enter a coalition with the HZDS. However, if the SMK entered a Smer-KDH coalition, what would the eventual issues be between the SMK and Smer?

GM: Such a coalition is one of the realistic options, even though the KDH and SMK would certainly prefer a coalition with the SDKÚ despite their experiences with Dzurinda.

The sharpest conflict between Smer and the SMK would stem from the incompatibility of their social-economic programmes, as well as the sometimes open and sometimes hidden anti-Hungarian nationalism of some Smer representatives. Then there is also Smer's general profile as a party that has suppressed the civil dimension for the benefit of the national.

KDK: As for Smer and the SMK, Bugár said in January that "coalition cooperation between the SMK and Smer in the next election term is made impossible by the parties' different programs". However, the party seems to have stepped back from that position. Smer has certainly taken positions in the past that are not conducive to cooperation with the SMK, but when presented with the alternative of a Smer-SNS-HZDS coalition, the SMK might be willing to enter government to block what it would view as a worst-case scenario. It might be especially so inclined if the coalition included another party such as the KDH that it had worked with in the past [albeit with some tension].

TSS: If the SDKÚ and its former coalition partners get a chance to form the government, would such a coalition function much differently than the one we have witnessed over the past four years?

GM: I don't think there would be a great difference in the concrete steps it took in the social-democratic sphere, where there is the largest common ground between their programmes. However, relationships between the party leaders would be different, with a stronger emphasis on keeping agreements and an effort on the part of the KDH and SMK to make all processes more transparent so there are no more conflicts like the ones in the past term that harmed the parties. These parties could reach such an agreement much more easily among themselves than with other parties, such as the HZDS and Smer.

KDK: It is doubtful that SDKU-KDH-SMK will be in the position to shape a coalition, and I haven't heard much discussion lately about a minority government with silent support from the HZDS.

It seems, at least from afar, that a Fico government has been accepted as a fait accompli and that the open question is his choice of partner. I suspect that if some kind of SDKU-KDH-SMK coalition were to form that it would function in ways that were recognizably linked with the past but with enough changes to redress the balance among the parties and mitigate the distrust among the members.

Something similar happened in Slovakia in the formation of the 2002 government [although there the coordination was actually eased by the removal of the SDĽ] and perhaps more analogously in the formation of the 1996 government in the Czech Republic, in which the smaller parties insisted on a reformulated relationship that limited ODS control over portfolios and agenda-setting.

TSS: If the SDKÚ found itself in opposition, what kind of opposition party would it be? Would it be a constructive force?

GM: So far the SDKÚ has never been in opposition, as since its founding it has been a party of power. Under certain circumstances it could even benefit from a time in opposition to profile itself more clearly and gain new voters. If we had a HZDS-SMER government it could lead the fight against Smer's leftist populism. It all depends on how motivated some SDKÚ representatives would feel to be an active opposition. I think the SDKÚ could become a very tough and unpleasant opposition party.

KDK: It is hard to know what would happen to the SDKÚ in opposition. The fact that it came in second might sustain it, along with the possibility that a Fico government could be relatively short-lived. Furthermore, the party's voters tend to be quite programmatic and therefore probably reasonably loyal, and exclusion from government wouldn't come as a disruptive shock. The current electoral environment, however, has three secular pro-market parties that could be described as liberal, and there might be a period of reconfiguration and consolidation if these parties saw their exclusion from government as the result of an inability to cooperate. Dzurinda's position at the head of this ideological pole is to me an open question, but I am not privy to intra-party discussions.

The more interesting question is whether Smer can hold it together. Tim Haugton of the University of Birmingham has pointed out that Smer's internal stability could be threatened either by its failure to get into government [its partisans have been waiting patiently and may lose that patience] or by its success.

From both an electoral and organizational standpoint, this is an ungainly and loose-knit coalition. The Smer elite [often entrepreneurs, professionals and local notables] do not appear to work particularly well with the acquired SDĽ membership structures, and it will be interesting to see whether those who have joined the party in search of specific gains will maintain their allegiance when real money and power is at stake. I get the impression - from afar - that the party's notables have remained on good behavior in order to achieve power, but once in place, I wonder how long they will continue to cooperate and whether Fico will be capable of managing the chaos. Problems will become especially acute when, by this time next year, Smer has proven no better at solving the problems of ordinary people than any other party, and its preferences have dropped below 15 percent.