In their own words

THOSE who expected Slovakia's political parties to field brand new faces at the top of their candidates lists for the 2006 parliamentary elections were disappointed.
Regardless of whether voters approve, politicians such as Mikuláš Dzurinda and Ivan Mikloš of the Slovak Democratic and Christian Union (SDKÚ), Vladimír Mečiar of the Movement for a Democratic Slovakia (HZDS) and Smer's Robert Fico and Robert Kaliňák will continue to define the country's political landscape.
The Hungarian Coalition Party's (SMK) Béla Bugár, the Christian Democratic Movement's (KDH) Pavol Hrušovský and the Slovak National Party's (SNS) Ján Slota will also continue to set political standards, for better or worse. 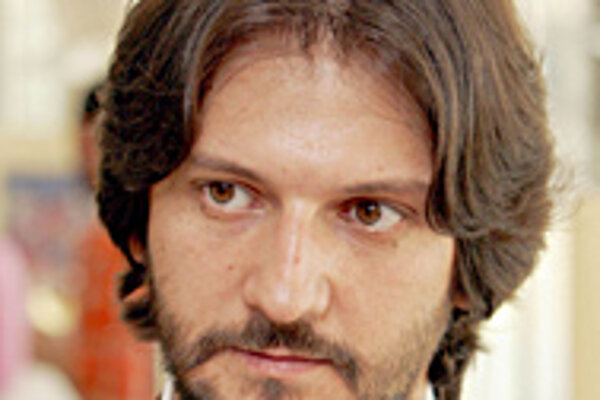 Font size:A-|A+  Comments disabled
THOSE who expected Slovakia's political parties to field brand new faces at the top of their candidates lists for the 2006 parliamentary elections were disappointed.

Regardless of whether voters approve, politicians such as Mikuláš Dzurinda and Ivan Mikloš of the Slovak Democratic and Christian Union (SDKÚ), Vladimír Mečiar of the Movement for a Democratic Slovakia (HZDS) and Smer's Robert Fico and Robert Kaliňák will continue to define the country's political landscape.

During the run-up to elections, The Slovak Spectator spoke to political leaders who have been part of the scenery for many years and whose parties have left their mark on Slovakia.

The June 17 elections shaped up as a run-off between the opposition socialist Smer on the one hand, and the three former right-wing government partners, the SDKÚ, KDH and SMK, on the other. The opposition HZDS, SNS and Free Forum (SF) were seen as swing parties that could decide which side would form the government.

SDKÚ stalwart Mikloš said that the key for the three right-wing parties was to gain more votes than Smer and then to be able to cooperate, despite serious differences in political style that led to the downfall of the Dzurinda government. According to Mikloš, the main theme of the elections was continuity versus discontinuity.

The godfather of Slovakia's 19 percent flat tax, which became a touchstone of the election campaign, Mikloš said that if the right wing were reinstated, it might be possible to cut taxes by one percent a year until 2009. He said dropping the tax rate to 15 percent would not violate any EU rules or directives.

On the other hand, the most ardent critic of the tax reform, Smer, has proposed raising taxes on people who earn more than Sk600,000 (Ř15,863) a year.

Robert Kaliňák said that the Dzurinda government had encouraged in people a strong sense of individualism, if not selfishness.

"Our programme tries to revive the principle of solidarity, which means that people who have above-standard incomes should contribute more to society, to the joint coffers, with a higher tax rate. Not all people have equal opportunities and abilities to earn money. But we in no way want to discourage people from working, as the right wing claims," he told The Slovak Spectator.

However, Kaliňák added that until only recently, companies in Slovaks paid 40 percent tax, and that Smer did not want to move in that direction.

Mikloš admitted that Slovakia is troubled by over-employment in the state sector, a lack of skilled labour in certain regions, and continuing corruption in the state administration and other areas of society. However, he claimed to know a cure for corruption at least.

"The introduction of e-government is another means to reduce corruption, allowing electronic procurement and so on. E-government would also introduce universal standards for information systems. One of the greatest sources of corruption over the last 15 years, and in fact the basis of the 'skupinka' (little group) affair [in 2003 which cost the government its parliamentary majority], was the information business because of the fact that great sums of money are involved and because it is an expert field that bureaucrats don't understand, giving those who offer the services an information advantage. There were no general rules, and no one to prevent the purchase of pointless or duplicate systems that couldn't communicate with each other," Mikloš said.

"People on the Smer candidates list operated in the business environment. Slovakia is not the US. It is a small country where many business affairs get linked together. I at times represented the government of [Jozef] Moravčík in 1994, and nobody talks about this government negatively today.

"Many [Smer members] were [also] linked to companies owned by current rightist or liberally-oriented politicians. Slovakia is not a huge country where you can live in isolation," Kaliňák said.

According to the Smer No 2, just because Smer members served on the boards of various companies with former HZDS backers, no connection between the two can be adduced. He blamed talk of the connection on SDKÚ politicians.

"The SDKÚ is just disappointed because it could never ever reach the success of the Czech ODS, and can only dream of 35 percent, because the way it does politics is a catastrophe," Kaliňák said.

While the SDKÚ and Smer seemed unlikely to bury the hatchet and work together after elections, other right-wing parties, notably the KDH, left the door open to an eventual coalition with Smer.

The KDH sees itself as a defender of society's morals and of Slovak sovereignty within the EU, especially on tax issues, where it promised to push for a parliamentary declaration on the matter.

"The declaration will bind members of the cabinet and state bodies representing the country at European Union forums neither to agree with the harmonisation of direct taxes, their rate or tax base, nor to support the creation of a European tax," Pavol Abrhan of the KDH told The Slovak Spectator.

The Christian Democrats ran on perhaps the clearest platform. Apart from a strongly pro-family campaign, the party continued to push for the adoption of a treaty with the Vatican on objections of conscience, which would allow believers to refuse to perform acts contrary to their beliefs, and which was the issue that killed the coalition.

"A treaty between Slovakia and the Holy See is one of the KDH's priorities. Indeed, Slovakia is bound to adopt the document by its basic treaty with the Vatican. At the same time, we are pushing for a state agreement with the same wording between all the registered churches in Slovakia," Abrhan said.

While the SDKÚ and KDH seemed to have defined themselves firmly on the right of the political spectrum, the HZDS was less definite about its prescription for Slovakia's economic development, although it too leaned towards the right perhaps more than in the past.

"The development should be Christian, and that tends to be conservative. We have said that our values should be national but not nationalist, which is again more right wing. What we actually say is that changes should be socially acceptable - not in a way that would slow economic growth, but that would provide for political stability," Vladimír Mečiar told The Slovak Spectator.

Mečiar, who has failed twice (in 1998 and 2002) to turn an election victory into a return to power, also struggled to send out signals that he was not a threat and that the HZDS was a regular pro-Western party.

"I have never been a threat," he said. "There was a misunderstanding of the steps that were taken at a transitional period in this country's development. Above all, I think that time has shown that we are a pro-integration party, that we are consistent in this, and that we are looking for ways for Slovakia to act constructively in both groupings."

According to the three-time prime minister, the real threats to Slovakia are "anti-Americanism from Smer, anti-Europeanism from the Christian Democrats, and nationalism from the SNS".

However, the HZDS, and especially Mečiar, have never distanced themselves from their behaviour while in government from 1994 to 1998, when their policies pushed Slovakia to the verge of international isolation.

Asked whether he had changed his views on the April 1996 murder of Róbert Remiáš, an important figure in a case that embarrassed the Mečiar government, Mečiar continued to maintain that Remiáš's death was a accident, despite police evidence that it was caused by a car bomb.

"The tragic death of Róbert Remiáš in a car accident was portrayed as a political act of the government. But time has shown whose side the truth was on," he said.

While Mečiar has softened his criticism of Dzurinda's right-wing policies in his search for a path back to power, Ladislav Jača of the Slovak Communist Party says there is no reason for the communists to change their rhetoric, as Communism is bound to return to Slovakia.

"The future society does not necessarily have to be called communist or socialist, but it will be a socially just society stemming from communist ideals," Jača told the Spectator.

The election campaign was also enlivened by another politician playing a typically inflammatory role, this time on the far right of the Slovak political stage: Ján Slota.

While Slota claims that the SNS is "a fundamentally conservative party, like other national parties around the world" and that it is "in favour of the flat tax, with the sole exception of basic foodstuffs", analysts say that it is not Slota's economic opinions that makes him popular with his supporters.

Slota, who believes that ordinary Slovaks are just like him, claims he has to protect the nation from enemies within - ethnic Hungarians and Roma.

"In Slovakia the birth rate has gone way down, and is far exceeded by the mortality rate, which is bleeding dry the healthy blood of the nation. From this point of view it is dangerous for us that the birth rate of the gypsy population is higher, and here we are only drawing on the statistics that are available," he said in an interview with The Slovak Spectator.

Béla Bugár, the head of the ethnic Hungarian SMK, the party that is most often the target of Slota's outbursts, said the SMK had been trying to avoid pouring oil on Slota's campaign fires.

"The SNS throw dirt at whatever is different from them, be it Hungarians, Roma, or homosexuals. Their programme can be summed up as: we protect what is ours and don't want anything foreign. But when you look at the arrival of [the Korean carmaker] Kia to Žilina and how Slota erected an English-language billboard stating "Welcome to Žilina", it makes you feel that his statements vary depending on how the situation evolves," Bugár told The Slovak Spectator.

However, the SMK has also been struggling to prove that its agenda is much wider than the interests of ethnic Hungarians.

"When we proposed, in association with the reform of the healthcare system, that everyone who undergoes regular dental checkups receive basic dental care for free, did it benefit only Hungarians? When, within fiscal decentralisation, we resisted a proposal that would have put municipalities with fewer than 2,500 inhabitants at a disadvantage in terms of financing, did we help only Hungarian villages?" Bugár asked.

Bugár told The Slovak Spectator that politicians who criticize the SMK are pursuing a sham agenda.