NEVER before the second Dzurinda administration has any Slovak government been so reliant on the support of independent MPs. Towards the end of the administration's term, after losing its parliamentary majority, it even faced grave allegations of vote-buying in the legislature.
Although no member of the government was prosecuted in relation to the alleged vote-buying affair, media such as the conservative weekly .týždeň charged that the Dzurinda government, especially the prime minister's Slovak Democratic and Christian Union (SDKÚ) party and its co-ruling New Citizen's Alliance (ANO), had hurt the reputation of the reforms they were trying to introduce, and turned politics "into a cynical business". 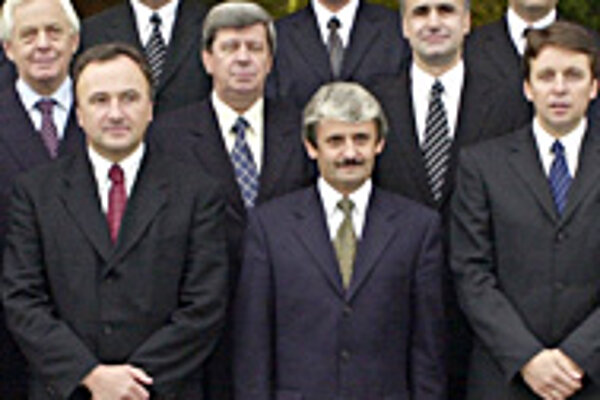 Font size:A-|A+  Comments disabled
NEVER before the second Dzurinda administration has any Slovak government been so reliant on the support of independent MPs. Towards the end of the administration's term, after losing its parliamentary majority, it even faced grave allegations of vote-buying in the legislature.

Although no member of the government was prosecuted in relation to the alleged vote-buying affair, media such as the conservative weekly .týždeň charged that the Dzurinda government, especially the prime minister's Slovak Democratic and Christian Union (SDKÚ) party and its co-ruling New Citizen's Alliance (ANO), had hurt the reputation of the reforms they were trying to introduce, and turned politics "into a cynical business".

The politics of the current government, whose term was cut short three months before the scheduled election date, depended to a great extent on talks with MPs who left their original coalition and opposition party caucuses.

Yet when the government took power in 2002, the outlook seemed bright for the four centre-right parties.

In a surprise outcome of the elections, Dzurinda's SDKÚ, the Christian Democratic Movement (KDH), the Hungarian Coalition Party (SMK), and political newcomer ANO agreed to form a coalition with 78 of 150 seats in parliament.

However, having scored only 15 percent in the vote, the popularity of Dzurinda's SDKÚ did not seem to give Dzurinda the necessary authority to form a government.

Although they were politically the most compatible coalition government in Slovakia to date, differences between individual members of the centre-right coalition emerged shortly after the elections and later grew into major clashes especially between the conservative KDH and the more liberal ANO. At issue were abortions and Slovakia's treaties with the Vatican, areas closely connected with the KDH agenda.

The Dzurinda government was also considerably weakened by conflicts within both the SDKÚ and ANO, which resulted in a series of ministerial replacements.

The KDH and SMK endured no major internal squabbles from 2002 to 2006.

The first MP to leave his ruling party, on May 26, 2003, was ANO's Anton Danko. Although he remained a supporter of the ruling coalition, he criticised the "dictatorial" ways of ANO leader Pavol Rusko. Later, Robert Nemcsics, a former ANO economy minister, and Branislav Opaterný, the deputy transport minister, also left the party for similar reasons.

On September 23, 2003, just one year after the elections, the Dzurinda government officially lost its majority in government with the departure of Nemcsics and Opaterný. Although both declared their support for the ruling coalition, the ruling parties now mustered only 75 MPs.

Problems within ANO continued until a messy corruption scandal involving Rusko himself in autumn 2005 led to the party's departure from the ruling coalition and its virtual meltdown.

ANO split between defectors who remained in government and loyalists who followed Rusko into opposition. The crisis reduced Dzurinda's ruling coalition to 60 MPs and made it entirely dependent on negotiations with independents. However, the ANO defectors who remained with the ruling bloc allowed the Dzurinda government to function until the beginning of 2006, when the KDH brought the administration down by quitting the government over a refusal by the SDKÚ to submit a treaty with the Vatican to the cabinet for debate.

The withdrawal of the KDH meant sudden death for Dzurinda's minority government. With major reforms completed, early elections were accepted as a way out of the government's constant crises.

But it was not only ANO that lost MPs and destabilised the government. The PM's SDKÚ also lived through some rocky times during the 2002-2006 election term.

A conflict between Dzurinda and one of his long-time party peers, Ivan Šimko, emerged after Šimko, then Slovakia's defence minister, refused to back the dismissal of Ján Mojžiš, the former head of Slovakia's National Security Bureau (NBÚ).

While the conflict was believed to be centred around a state IT tender, it led to a political scandal known as the skupinka ("little group") affair.

On August 5, 2003, Dzurinda told a press conference that he had information that a "little group" was working against the interests of Slovakia and his SDKÚ party. Later that month, opposition MP Robert Kaliňák, head of the parliamentary Defence Committee, released a list of seven state officials, journalists and entrepreneurs that Dzurinda allegedly believed were members of the group. The NBÚ's Mojžiš was among them.

On September 10, Dzurinda fired Šimko for refusing to support the dismissal of Mojžiš. Two months later, Šimko launched a new political platform within the PM's own party, the Free Forum (SF). The group planned to unite SDKÚ members seeking to reform the party. SF supporters said they had no plans to break away from the SDKÚ, but their attitude soon changed. At the end of 2003 Šimko and six other SDKÚ members left the PM's party to establish the SF as an independent party. The ruling coalition now officially controlled only 68 of 150 MPs.

The coalition continued to operate with a minority in parliament, and Dzurinda sought support among the independent MPs to get individual pieces of legislation passed.

The Dzurinda government managed to operate in this way for a relatively long time because many coalition MPs and a growing number of opposition MPs who had left their parties to become independent in reality supported the government's measures.

The opposition parties were too weak and had too many conflicts between them to wage an effective campaign to overturn the government.

Speculation also emerged in 2004 that Dzurinda and opposition Movement for a Democratic Slovakia leader Vladimír Mečiar had made a secret pact to help the government stay in power. Both leaders continue to reject these accusations to this day.

At the time, parliament was deadlocked following the departure of Rusko and his followers from the government. The coalition lacked enough votes to even formally open a session. After a week, parliament finally opened with the help of independent MPs as well as Kolesár and Džupa.

Yet the trouble was far from over. On November 9 ANO's Rusko released a secret recording to the police featuring former ANO MP Iveta Henzélyová claiming that she had been approached with an offer of money in exchange for her vote in parliament. Henzélyová did not identify who had tried to bribe her.

The police looked into the matter and confirmed that an attempt had been made, but shelved the case after being unable to track down the culprits.

Although the Dzurinda government never made any major compromises in its reform efforts, suspicions as to how the coalition operated in parliament throughout much of its current term remained and gave ammunition to the opposition in its attacks on the prime minister.