All eyes on KDH as Smer hunts partners

ROBERT Fico, whose socialist Smer party scored a strong 29.1 percent in the June 17 general elections, started official talks with all five other parties that won seats in parliament within days of the ballot. However, as the meetings continued, attention gradually focused on the 8-percent conservative Christian Democratic Movement (KDH), whose agonized indecision over whether to join Smer was seen as the key to the shape of the next government. 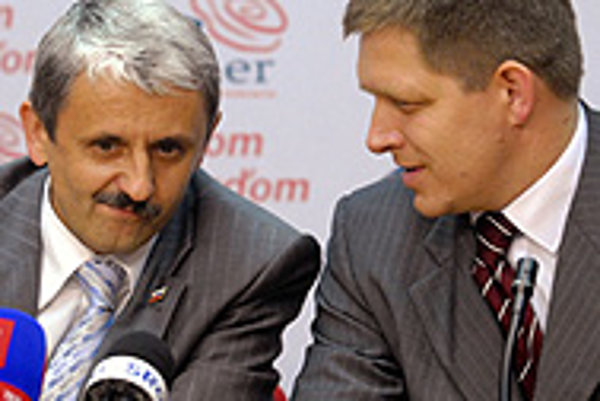 Font size:A-|A+  Comments disabled
ROBERT Fico, whose socialist Smer party scored a strong 29.1 percent in the June 17 general elections, started official talks with all five other parties that won seats in parliament within days of the ballot. However, as the meetings continued, attention gradually focused on the 8-percent conservative Christian Democratic Movement (KDH), whose agonized indecision over whether to join Smer was seen as the key to the shape of the next government.

Two days after the elections, Fico was formally tapped by President Ivan Gašparovič to lead government talks. The president said he was confident that a draft of the new government would be ready by the end of June, but as the week drew to a close, the initial round of talks had produced no breakthroughs.

While Fico declared, after meeting the far-right Slovak National Party (SNS) and the Movement for a Democratic Slovakia of the authoritarian Vladimír Mečiar, that no barriers existed to cooperation between the three opposition parties, he also said the same of two former government partners - the KDH and the Hungarian Coalition Party (SMK).

Indeed, it was the KDH that first reported it had received an offer from Smer to form a government.

The party's deputy chairman, Vladimír Palko, said on June 20 that the KDH had been approached by Smer's Robert Kaliňák with an offer of coalition cooperation. The contact took place on that same day, and before Smer met for official talks with representatives of the SNS and HZDS.

But the KDH appeared split over whether they should forge a coalition with Smer. Former Justice Minister Daniel Lipšic was particularly outspoken against doing a deal with Smer.

"Smer is supported by business groups with an unacceptable past. Smer also has an unfavourable program and people. The best option for us right now would be to go into opposition," Lipšic told journalists.

The KDH is also worried about programme differences between the conservatives and Fico's left-wing Smer.

Emerging from a meeting with Fico on June 21, however, KDH Chairman Pavol Hrušovský said that the KDH would be making a purely political decision on whether to cooperate with Smer in a coalition government.

"The programme issue is only secondary," Hrušovský said.

Should the KDH ultimately decide to join Smer, it would likely open the door to the additional participation of the SMK in the government, which would give the cabinet a majority with 84 seats in the 150-member legislature.

SMK leader Béla Bugár said on June 21 that his main condition for entering a government with Smer is that it not be the only former government party joining the leftists. That meant either the KDH or the neo-liberal SDKÚ of Prime Minister Mikuláš Dzurinda would have to go with them, and Fico and Dzurinda have already said that their parties were the furthest apart in terms of programme.

According to Pavel Haulík of the MVK polling agency, Smer was eyeing such a left-right coalition from the start.

The political analyst pointed to the initial statements Fico made after being given the task of forming the government, in which he guaranteed to minorities that their rights would be protected even if the SNS joined the government.

"It was clear even before the final election results came out that Fico would be happiest with a coalition that is internationally accepted. Having the KDH and SMK in government would give him this," Haulík told The Slovak Spectator.

At the same time that it was weighing Fico's offer, the KDH rejected an initiative by Dzurinda to form a right-wing bloc between the SMK, KDH, and SDKÚ to "secure continuity" for the reforms started by the outgoing government.

The prime minister's call was supported by the SMK, with Bugár saying it would be "the best thing for Slovakia". The bloc would have 65 seats to Smer's 50, and would only need the 15 seats of the HZDS for a parliamentary majority.

The KDH, a traditional rival of the SDKÚ for the title of the unofficial leader of the right wing, scored a surprisingly low election result of 8.3 percent, and had hoped to be in double digits. On the other hand, the SDKÚ captured a surprisingly high 18.6 percent.

One reason the KDH was likely against such a bloc was its rejection of Mečiar's HZDS, its traditional political enemy.

According to Hrušovský, Fico as the election winner was the one who should be doing the wheeling and dealing.

"It's useless for any other party to come up with an initiative to form a government," he said.

According to Haulík, should the KDH in the end refuse cooperation with Smer and go into opposition, an option the party said was still open, Fico would be forced to choose between two other options.

The first was a coalition with the SNS and HZDS, which was generally viewed as the worst possible option for Slovakia by economic analysts, who believed such government could endanger the nation's plans to adopt the euro in 2009 and could increase budget deficits through excessive social spending.

On the other hand, Fico would be unlikely to have programme conflicts with the SNS and HZDS, according to Haulík, as both were very eager to enter government and would be prepared to follow Smer's lead.

In terms of international acceptance, this coalition was likely to be Smer's worst option, given Mečiar infamous autocratic past and Slota verbal and behavioural excesses.

"It's clear that Fico is interested in forging an internationally accepted coalition. This would be hard with the SNS and HZDS. The image of the SNS is even worse than the party is in reality. Fico probably would not dare to pursue this option if he had other choices," Haulík said.

The decision of the KDH was thus seen as crucial to the next government - if it accepted, it would likely drive a wedge within the right-wing trio and secure Robert Fico's path to power, while if it said no it could drive Smer into the arms of the HZDS and SNS.

At the time The Slovak Spectator went to print, no decision had been announced by any party. Smer's executive was scheduled to meet to discuss its strategy for the projected second round of talks.

According to Haulík, should the KDH decide to go into opposition, which he considered "very likely", Smer would have a final option - to form a "national unity" government with its biggest rival, the SDKÚ, which would give it 81 votes in parliament.

It was unclear whether the SDKÚ would be willing to accept such an offer if it were made. Both parties would have a hard time explaining this alliance to their electorates, given the heat of the conflicts between them and their substantial programme differences.

However, several commentators considered this option a viable solution.

"The division of power in the new parliament indicates that the decision on the [future coalition] partner will not be about programme similarities but about pragmatic choices," wrote the Trend business weekly's editor, Rado Baťo in a recent commentary.

Baťo suggested that both Smer and the SDKÚ should reject cooperation with the HZDS and SNS, despite the pragmatic advantages each might gain from doing so.

According to Baťo a coalition between Smer and the SDKÚ would "force Dzurinda and especially Fico to act like great statesmen" as both would have to cope with their rocky past relations "as well as their personal antipathies".