Markets wince at Fico's every step

SEVERAL post-election tremors shot through Slovakia's money markets in the week following the June 17 elections as currency traders waited nervously for the contours of the next ruling coalition to emerge.

The Slovak crown weakened on June 21 from 38.29 SKK/EUR to 38.50 within a few hours, apparently in response to the announcement by Robert Fico, the leader of the socialist Smer party that won the ballot with 29.14 percent, that nothing prevented him from forming a coalition with then far-right Slovak National Party and the Movement for a Democratic Slovakia led by Vladimír Mečiar. 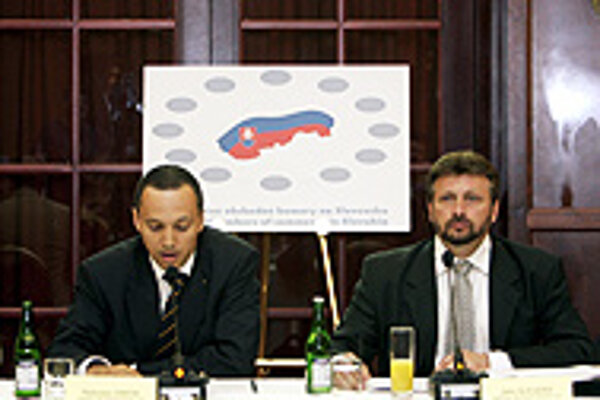 SEVERAL post-election tremors shot through Slovakia's money markets in the week following the June 17 elections as currency traders waited nervously for the contours of the next ruling coalition to emerge.

The Slovak crown weakened on June 21 from 38.29 SKK/EUR to 38.50 within a few hours, apparently in response to the announcement by Robert Fico, the leader of the socialist Smer party that won the ballot with 29.14 percent, that nothing prevented him from forming a coalition with then far-right Slovak National Party and the Movement for a Democratic Slovakia led by Vladimír Mečiar.

The announcement prompted a wave of crown selling and calls from foreign banks to Slovakia to ascertain the likelihood of such a government being formed. A Smer-HZDS-SNS coalition is the one most dreaded by the markets and EU diplomats, as it would likely mean an end to some of the economic reforms enacted by the 2002-2006 Dzurinda government, and a return to power for two parties that drove Slovakia to the verge of international isolation while in cabinet from 1994-1998.

Business leaders and market watchers have very definite ideas on what the next government should do in terms of the economy, social issues, education and justice in order to keep the country attractive to foreign investors and to maintain its vigorous economic growth.

Bruno Sergi, professor of international economics and political economy at the University of Messina, said that maintaining economic vitality would be key for the next government.

"The upcoming government faces an essential task in getting on track with the fiscal and monetary criteria of Maastricht so the country can adopt the euro [by January 1, 2009 as planned]," Sergi told The Slovak Spectator.

The academic added, however, that he believed it was possible to combine continued economic growth with greater sensitivity to low-income groups and rising incentives to domestic and international investors.

As the parties started negotiating on forming the next government, an informal association of the foreign chambers of commerce in Slovakia called on the next government to continue to improve the country's business environment, regardless of who is holding the wheel.

The chambers represent over 700 foreign and domestic businesses in the country.

"We expect [the incoming government to] continue improving the business environment and to implement Slovakia's competitiveness strategy," said the director of the American Chamber of Commerce in Slovakia, Jake Slegers, for The Slovak Spectator.

According to Slegers, the chambers were urging further investments into human capital and employment and reform of the education system, along with the creation of an effective and transparent public sector. They also called on the new administration to pursue the full benefits of EU integration.

"Greater attention to e-government and public procurement legislation, lobbying and transparency issues should also make it to the main focus of the government's programme," Slegers added.

According to a statement by the chambers, Slovakia has made considerable progress in improving the business environment, but needs to work towards "better law enforcement, reducing the counterproductive level of levies imposed on labour, intensifying the link between education and market demand, and last but not least, helping SMEs access venture capital."

The chambers said that the school curriculum needed to be updated to better reflect the needs of the labour market, while the government needed to focus on digital literacy, foreign languages and life-long learning.

According to Lívia Eperješiová, the director of the British Chamber of Commerce in Slovakia, it would be "very bad for Slovakia if the reforms were halted or slowed down", as they had proven particularly important in increasing foreign capital inflows.

While the chambers did not comment on particular coalition scenarios, the responses of financial markets to political statements and hints on the next ruling coalition were an eloquent expression of what the markets thought of the various cabinet options on the table.

Even before the crown dunked on June 21, it had reached a seven-month low of 38.25 SKK/EUR following Fico's admission on June 20 that euro adoption in Slovakia could be delayed should it prove "disadvantageous".

Fico said that while Smer respects Slovakia's decision to join the European Monetary Union at the beginning of 2009, if that date cannot be met without pain to Slovakia's inhabitants, "we will look for different solutions". But it was the prospect of a Smer-SNS-HZDS government that really had the markets in fits.

"A cabinet [formed] from the current opposition would also mean a stop to privatisation. It would probably maintain state or unclear public ownership. Inefficiency, waste, and asset stripping at these companies would continue," Ján Tóth, the chief economist of the ING bank, told the Pravda daily.

Tatra banka analyst Robert Prega said that the question he was most frequently asked was whether there will be any changes to tax legislation. Slovakia's introduction in 2004 of a 19 percent flat rate of taxes on personal income, corporate profits and VAT proved hugely popular among foreign investors and sealed the country's reputation for bold economic reforms.

"It will be a priority, maybe even more important than the question of which reforms will continue," Prega told The Slovak Spectator.

According to Prega, every government is allowed to have its priorities, but the key is that all changes that are made conform to the country's long-term goals and do not threaten fiscal discipline.

"If there are any changes made, various segments of the economy will react differently. It is well known that the financial markets react very promptly. Interest rates and the exchange rate react even to expectations and announced changes very hastily and expressively. However, macroeconomic changes will surface later. For example, next year we expect GDP growth of 7 percent, the highest in Slovakia's history, and that shouldn't really be influenced by the priorities of the government," Prega said.

"The steps taken by the new government will be felt much later in macro-economic terms," he added.

But Poštová banka analyst Miroslav Šmál said that one of the greatest challenges would be to preserve reforms in their present form.

"From the prospect of securing a stable and long-term economic growth, the growth of employment and the influx of new investments it would be good to continue the current reform process and trying to meet the Maastricht criteria and adopt the euro as fast as possible," Šmál told The Slovak Spectator.

According to Šmál, the priority is preventing a return to the pre-reform period, as that would reduce the standard of living of the population.

"The preservation of the flat tax system, which minimizes tax evasion, is one of the most important criteria for continued foreign investment. It's also important not to repel business by measures like taxing dividends or raising taxes for monopolies and 'overly' profitable companies," Šmál said, referring to some economic policy promises that Fico has recently confirmed.

Šmál called on the future government to be fiscally disciplined and to focus on meeting the Maastricht criteria and adopting the euro. Failure to meet these criteria would weaken the Slovak crown and cause interest rates to rise, hurting consumers, the corporate sector and the state.

According to Šmál, a leftist government with loose fiscal discipline and hostility to economic reforms would be the greatest risk to achieving these goals.