THE THICK black smoke that billowed over Bratislava from a chemical plant fire on June 18 scared the capital's citizens and forced some to abandon their homes.

"I collected my family and we spent the night in a cottage outside Bratislava. The smell was too intense," said a resident of the Petržalka suburb in which the fire broke out for The Slovak Spectator. 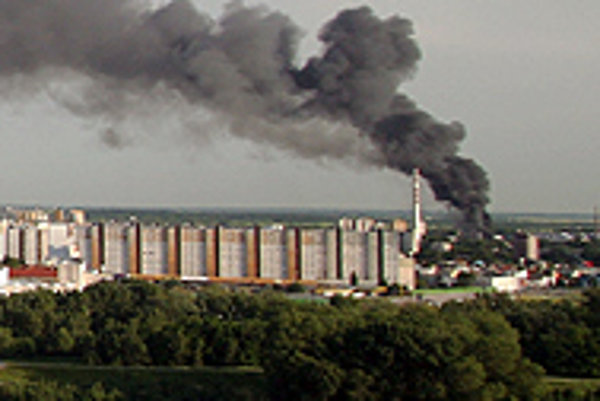 THE THICK black smoke that billowed over Bratislava from a chemical plant fire on June 18 scared the capital’s citizens and forced some to abandon their homes.

“I collected my family and we spent the night in a cottage outside Bratislava. The smell was too intense,” said a resident of the Petržalka suburb in which the fire broke out for The Slovak Spectator.

An alarm went off around 17:00 in a warehouse housing chemicals, owned by the Detox firm on Kopčianska Street. Shortly before it started, a hailstorm drove through Petržalka; some think that the storm caused a short circuit or that the lighting struck the Detox building. The cause is being investigated.

The damage has been estimated at Sk10 million (Ř261,621). The Greenpeace organisation is asking for an in-depth examination and monitoring of areas where the smoke settled.

“[Fire] experts carried out an inspection of the site with the assistance of a dog trained to find the origins of fires and flammable materials, and the samples will be examined by criminal experts,” Bratislava police spokesperson Alena Toševová told the TASR news wire.

The police will also examine the list of materials that were found on the site and compare them with chemical analyses.

Several explosions shook the warehouse on June 18, and the flames reached several metres in height. The smoke stretched towards the Ružinov suburb. Over 200 fire fighters from all around Bratislava worked to extinguish the fire for more than 24 hours. The site was sealed to traffic and citizens were advised to close their windows and keep off the streets. The police and fire brigades also told people not to move in the direction of the cloud.

Two fire fighters who helped to combat the fire for almost seven hours were taken to hospital complaining of health problems such as headaches. All fire fighters who worked the blaze were later given medical checkups.

The first media reports claimed that it was the Matador rubber factory that was on fire, and that cyanide could have escaped. These claims later proved wrong.

The flames actually consumed 50 tons of oil, solvents, acids and other chemicals, including 20 cubic metres of tires. Greenpeace is concerned about the lack of information the public received during the accident.

“According to our information, during and after the fire no-one monitored the occurrence of dioxins, which are dangerous chemicals,” Greenpeace toxic materials coordinator Martin Hojsík told the media.

Greenpeace says that several dangerous chemicals could have been among the stored materials, such as pesticides, acids, wastes containing quicksilver, and arsenic. The organisation has asked the authorities to disclose a list of the chemicals that were being stored in the warehouse at the time of the fire, and the volumes that were on the site.

The warehouse is now in ruins. The police have started an investigation for criminal negligence.

THE JUNE 18 Detox warehouse fire also caused problems for the Petit Press printing house, which prints one of the country’s largest dailies, the daily SME, as well as The Slovak Spectator weekly.

Police ordered the employees of the printing house to evacuate the building, allowing them to return to their work late that night. The printing house was flooded as fire fighters combated the nearby fire. The newspapers had to be printed elsewhere, which delayed their distribution.