SMALL countries can usually only dream of having a decisive say in world politics. However, in Slovakia's case, its membership on the UN Security Council as well as in NATO and the EU demands that it react promptly to turbulence and take a sophisticated approach to international politics. 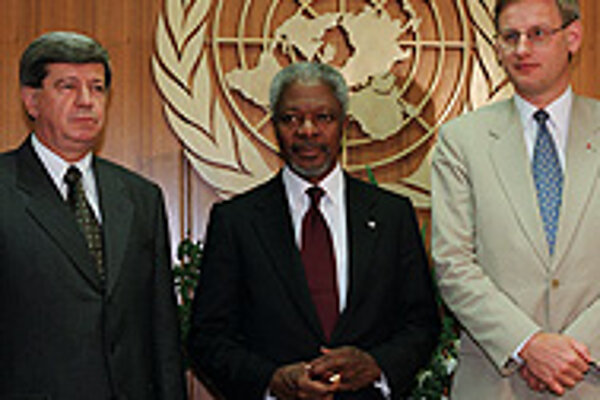 Font size:A-|A+  Comments disabled
SMALL countries can usually only dream of having a decisive say in world politics. However, in Slovakia's case, its membership on the UN Security Council as well as in NATO and the EU demands that it react promptly to turbulence and take a sophisticated approach to international politics.

Foreign policy is not likely to be the most frequently discussed topic in the debate over the shape of the new ruling coalition, which will soon take the reins from the team of Prime Minister Mikuláš Dzurinda.

However, Ivo Samson, head of the International Security Programme of the Slovak Foreign Policy Association, said that this did not mean the incoming government would not face grave foreign policy issues during its four-year term.

The Slovak Spectator (TSS): What are the most urgent foreign policy issues facing Slovakia in the next four years?

However, this may be complicated if the Christian Democratic Movement (KDH) becomes part of the government, because it is against reopening the Constitution discussion.

The second foreign policy issue will be EU enlargement. Slovakia will probably express strong support for the integration of Bulgaria and Romania in January 2007.

The third possibly contentious issue will be Slovakia's position toward Kosovo's final status. If the majority of the EU prefers that Kosovo be granted full independence, Slovakia might oppose this solution, and will probably back a compromise that gives Kosovo some form of autonomy within Serbia.

Another possible concern is security and defence policy, namely the increased involvement of the Slovak armed forces in peacekeeping operations.

Parties like Smer, the KDH and SNS will press especially hard for the government to reduce or withdraw the Slovak presence in unpopular military operations under US command, which means, first of all, Iraq.

As for the priorities of Slovak foreign policy towards Ukraine and the Western Balkans, the new government will probably retain these priorities and develop them through its representatives in the United Nations Security Council.

TSS: In your opinion, which foreign policy issues have been most neglected over the past couple of years?

IS: I would not say that Slovak foreign policy has been neglectful in the past few years. Admittedly, one could claim it has not been attentive enough, such as to the African agenda, which became an EU priority.

On the contrary, Slovakia has perhaps concentrated on too many regions: Ukraine, the Western Balkans, Belarus, Central Asia, Northern Cyprus, EU enlargement. When we take our limited diplomatic capacity into consideration, it is impossible to be involved in more priorities.

TSS: Many argue that small countries like Slovakia have a very limited say in world politics. How can they have an impact on the most important issues?

IS: This argument is rational, but small and economically weak countries must see their role in world politics in the right context. Furthermore, the fact that we are a member of international organisations such as the EU and NATO can give us considerable weight.

TSS: Some have said that Slovakia's weight in international organisations and EC structures suffers from its lack of qualified experts and an ineffective lobby. Do you agree?

IS:The number of qualified people has increased in recent years in spite of the fact that many diplomats are political party nominees and not career diplomats.

The issue of weak lobbying is, however, a serious one. The lack of lobbying skills has long been an issue for Slovak diplomacy, compared, for example, with Poland, Hungary or even Croatia.

TSS: Some analysts say the Slovak public has been losing interest in foreign policy issues. Even the media has curtailed its foreign policy coverage. Is this trend specific to Slovakia and other post-communist countries, or is it a wider phenomenon?

IS: The decline of interest in foreign policy is simply a reality, and it is not a positive trend. It has to do with the strongly consumerist attitude that Slovaks take toward world affairs, as well as toward EU and NATO membership.

However, I don't see any major differences between the Slovak public's interest in domestic issues and the interest of neighbouring post-communist countries.