IN WHAT observers had long feared as the worst-case scenario for Slovakia's future coalition government, the left-wing Smer party led by Robert Fico unanimously voted on June 28 to invite the former opposition Movement for a Democratic Slovakia (HZDS) and the far-right Slovak National Party (SNS) to join it in leading the country for the next four years. 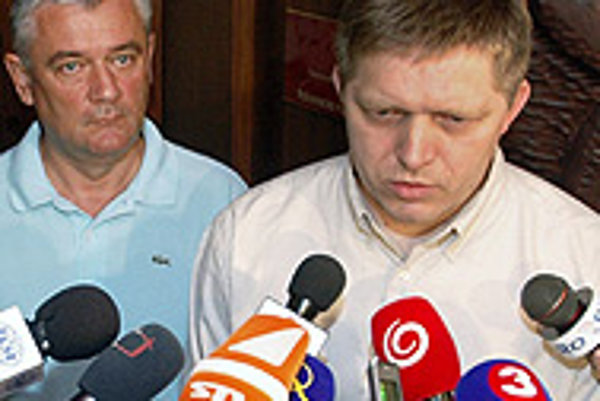 Font size:A-|A+0
IN WHAT observers had long feared as the worst-case scenario for Slovakia's future coalition government, the left-wing Smer party led by Robert Fico unanimously voted on June 28 to invite the former opposition Movement for a Democratic Slovakia (HZDS) and the far-right Slovak National Party (SNS) to join it in leading the country for the next four years.

Such a government would give Fico a strong majority in the 150-seat parliament with 85 seats, one more than controlled by the 1994-1998 government led by the HZDS and SNS. The problem, now as before, is that the controversial leaders of the SNS and HZDS could hurt Slovakia's image abroad and raise political and social tensions at home.

In addition to bringing parties to power that were responsible for leading Slovakia into virtual international isolation in the mid-1990s, it is also feared that Fico's invitation to the HZDS and SNS could halt or even reverse positive trends in Slovakia's economy.

Thanks to the right-wing reforms implemented by the outgoing Mikuláš Dzurinda government, Slovakia's economy became the fastest growing in the region in 2005, and seemed on track for meeting the stringent macroeconomic criteria for adopting the euro currency in 2009.

According to Fico, however, his selection of coalition partners gave the social democrats the best chance "to enact a social agenda", which consists in part of rolling back some of the Dzurinda government's reforms.

Two days before Smer's announcement, Mečiar was even elected as the head of his HZDS party caucus in parliament, to demonstrate his will to forego any post in the new government.

Fico would like to have a cabinet set up as well as the cabinet programme ready as soon as possible so that parliament could hold a vote of confidence by the first week of August.

Following the meeting of Smer's top board on June 28 and the selection of the HZDS and SNS - both parties eagerly accepted the offer - Fico said Smer would hold 11 ministerial seats in the new cabinet, as well as the post of speaker of parliament.

The SNS is to get three cabinet seats and one deputy speaker of parliament post. The second deputy speaker job should go to the HZDS, in addition to two ministerial seats.

Fico also confirmed that he would be Slovakia's new prime minister. Individual appointments to the ministries and parliamentary posts should be resolved in the coming days.

The cabinet and parliamentary appointments were decided on a basis proportional to the results each party scored in the June 17 parliamentary elections, where Smer gained 29.14 percent, the SNS 11.73 percent and the HZDS 8.79 percent.

Robert Kaliňák, Smer deputy chairman, told The Slovak Spectator in an interview following the announcement that Smer's choice of partners was "the best of the pick".

However, political commentators were not so sure, and some even said that Fico's choice could damage his career.

Political analyst Samuel Abrahám told the SME daily paper that the selection of the HZDS and SNS represented a "tragic start" to Fico's career in power, as well as "a signal that he will take this country backwards".

Pavel Haulík, an analyst with the MVK polling agency, agreed that a Smer-HZDS-SNS coalition was a "strategic mistake by Smer.

"It is likely to bring the party trouble in future," Haulík told The Slovak Spectator. "It's also unclear why they decided to rush things and didn't even consider the latest offer by the [conservative] Christian Democrats."

After days of vacillation by the Christian Democrats (KDH), whose leadership was divided on whether to join Smer, the party's top board voted to consider cooperating with Smer and the former ruling Hungarian Coalition Party (SMK) if Smer was interested in such a coalition.

Following the first round of talks Smer held with all elected parliamentary parties, including Dzurinda's Slovak Democratic and Christian Union (SDKÚ), Smer had seemed inclined to form a coalition government with the KDH and SMK, which would have been far more internationally acceptable, although liable to programme conflicts.

Initially, however, several top KDH officials came out strongly against this union, and said it would be better for the party to go into opposition than join Smer.

As time went by, the pressure from Smer grew, as did the signals that it would not wait forever for the KDH to decide. When the KDH finally voted in favour of joining Smer, KDH Chairman Pavol Hrušovský made the announcement only a few hours before Smer's final meeting, where it approved a coalition with the SNS and HZDS.

Although during the 2002-2006 Dzurinda government, Smer had been strongly critical of the SDKÚ-SMK-KDH coalition, the SMK was willing after the June 17 elections to join Smer in the new government anyway.

The SMK's Bugár said on June 29 that the party had wanted to prevent the "worst-case" scenario of a Smer-HZDS-SNS coalition coming true, especially because the inclusion of the anti-minority SNS in the government could "raise ethnic tensions in Slovakia".

However, Smer Deputy Chairman Kaliňák said the party's executive had "considered all options and chose the best one".

Kaliňák dismissed critics of the proposed coalition as people who "apparently voted for the SDKÚ.

"This is the 21st century and witch-hunts are long a thing of the past. These are all democratically elected parties, and those who don't like the government probably have a problem with democracy," Kaliňák told The Slovak Spectator.

Some critics also blamed the KDH for waffling until it ran out of time.

The party, however, rejected any responsibility for the situation.

The KDH also refused an offer from Dzurinda, who called on his former ruling partners in the KDH and SMK to join the SDKÚ and create a government with the HZDS. This coalition would have given the four a majority of 80 seats in parliament, 65 of which would have been controlled by right-wing parties.

The KDH, however, has steadily rejected cooperation with the HZDS because of the crimes committed under the previous Mečiar government, such as the kidnapping of the former president's son in 1995, which remained unresolved due to an amnesty that Mečiar issued in 1998 while acting as Slovakia's president.

According to the MVK's Haulík, Smer will not have an easy time with either the HZDS or the SNS.

"I think Smer honestly believed that this government would enable it to carry out its election programme the best. However, it probably didn't consider that the HZDS could escalate its demands," Haulík said.

In his opinion the HZDS, despite its low election result, could gradually demand more from Smer under the threat of joining the right-wing parties, which would mean the end of Fico's premiership.

"Smer will have a difficult time also because it will face a relatively homogenous opposition in parliament. Moreover, it has chosen inscrutable partners, and although they now may seem servile and willing to accept any terms from Smer just to be in government, this might not last forever."