SLOVAKIA'S parliamentarians for the 2006 to 2010 term were welcomed to their jobs on June 26 at a ceremony held in the Bratislava Castle, where the head of the election commission, Eva Garbiarová, handed certificates to the new MPs.
Most of the members of parliament elected in the June 17 vote, however, are far from new to the job, with as many as 84 of 150 having worked as legislators in the past. 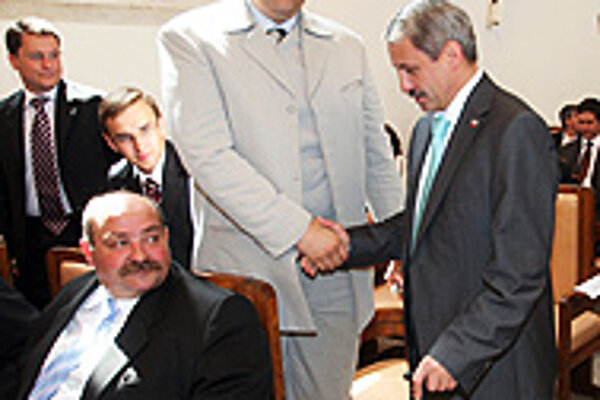 Font size:A-|A+  Comments disabled
SLOVAKIA'S parliamentarians for the 2006 to 2010 term were welcomed to their jobs on June 26 at a ceremony held in the Bratislava Castle, where the head of the election commission, Eva Garbiarová, handed certificates to the new MPs.

Most of the members of parliament elected in the June 17 vote, however, are far from new to the job, with as many as 84 of 150 having worked as legislators in the past.

The longest-serving MP is František Mikloško of the KDH, who has spent 16 years on the job and has never changed his political affiliation.

Mikloško, known for his bon mots in the legislature, said at the official ceremony that he expected his "younger colleagues in parliament to ask for my advice".

Although the youngest MP in the new parliament is Smer's Robert Madej, 25, he is unlikely to be among those asking Mikloško for guidance, having served as an MP in the 2002-2006 legislature.

Together with Mikloško, the HZDS's Katarína Tóthová is another longtime MP, and served as Slovakia's deputy PM in the 1994-1998 government of Vladimír Mečiar. Tóthová was originally placed at the number 30 spot on the HZDS's election slate, and would not have won a seat in parliament had she not received extraordinary support from HZDS voters, who indicated on their ballots that they preferred she serve over other party members.

Tóthová party boss Vladimír Mečiar, who has served three terms as Slovakia's prime minister, was also present at the ceremony, and said he regarded the new election term as "an invitation to work".

As usual, most Slovak parliamentarians are lawyers, doctors, teachers or professional politicians by trade, although several well-known sports figures are among the newcomers this time.

One is Smer's Dušan Galis, the coach of Slovakia's national football team. Another freshman in the legislature will be the SDKÚ's Ľuboš Micheľ, an international football referee who is officiating at the 2006 World Cup in Germany.

Micheľ was among the seven MPs who were absent at the June 26 ceremony, pleading his football obligations.

Also missing was the head of the SNS, Ján Slota, whose party returns to parliament after a four-year break following internal wrangling ahead of the 2002 general elections.

SNS Deputy Chairwoman Anna Belousovová, who was present at the ceremony, said her party was returning to parliament "more mature and confident", and that it had learned from its past mistakes.

The average age of the new MPs is 49 years; 126 of them (84 percent) are men, leaving a mere 16 percent of seats for women. According to women's rights activists there are several reasons for the low number of women in Slovak politics.

Ľuba Kobová from the Aspekt NGO told The Slovak Spectator that among the main reasons was the fact that politics in Slovakia is generally perceived as a "dirty business".

"Women do not identify with the way political problems and policies are formulated, which, as we saw in the election programmes of political parties, does not reflect their needs and interests," she said.

"When women overcome these basic barriers, they will face very practical job barriers in the party organizations. Stereotypical expectations of women in general, such as that they should take care of the household and the family, make it impossible for them to take part in informal meetings, for instance, which are often more important in politics than official meetings," Kobová said.

The ratio of the sexes among the election candidates was 1,808 men to 532 women, or 77.2 percent to 22.7 percent. However, women tended to be assigned lower ranks on party lists of candidates, giving them less chance of being elected to parliament.

Among the prominent women in the new parliament is the outgoing justice minister, the SDKÚ's Lucia Žitňanská, who replaced former Justice Minister Daniel Lipšic in the post after the KDH left the ruling coalition earlier this year.

Other well-known female figures include the SDKÚ's deputy foreign minister, Magda Vášáryová, as well as Zdenka Kramplová of Mečiar's HZDS, who under the 1994-1998 Mečiar government served briefly as Slovakia's foreign minister.

The new MPs will have to take an oath to be officially sworn in to their jobs. President Ivan Gašparovič convened the session for July 4. During that session, MPs should also elect their parliamentary speaker and deputy speakers, and approve the list and composition of parliamentary committees.

By law, the MPs are entitled to a laptop, a printer, a personal assistant and an office.

The MPs receive diplomatic passports, and have immunity from prosecution. They are also entitled to free accommodation and public transport, and several other advantages.